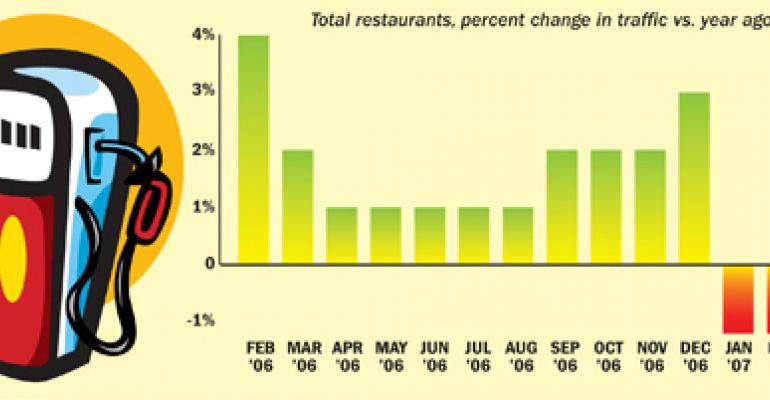 With gas prices inching upwards as the warmer months approach, savvy operators should be rolling out value meals or improving their current offerings, officials at the NPD Group say.

New data collected by the Port Washington, N.Y.-based global market research firm reveals that quick-service operators with value/dollar menus are well positioned to profit despite possible penny pinching by consumers. The growing number of casual dinnerhouses paring down their entrée portions might be doing themselves a favor.

The consumers who take advantage of value/dollar menus tend to be the same folks that are likely to feel the economic squeeze of high gas prices most: young people and those in mid- to low-income households.

While all dayparts experienced an increase in value/dollar menu traffic in the past year, breakfast has seen the biggest increase, up 24 percent over the previous year. The increase is likely due to the introduction of breakfast value/dollar menus by such chains as McDonald’s and Burger King.

The data also show that weekend value/dollar menu traffic was up 21 percent in the past year.

“When they went out on the weekends, it was value that drove that increase,” Riggs said. “[Consumers] are using it as a special treat.”

Value/dollar menu users not only like their food cheap, they like it fast. In the quarter ended in February, 59 percent of all value/dollar menu traffic was ordered from a drive-thru.

The three burger behemoths are among those reaping the benefits of the growing number of cost-conscious consumers turning to value/dollar menus.

Oakbrook, Ill.-based McDonald’s has had 48 months of consecutive comparable-store sales increases, which it attributes to a variety of value propositions, including its Dollar Menu.

“The Dollar Menu has played a significant role in that [success],” said McDonald’s spokeswoman Danya Proud.

The No. 1 burger chain’s Dollar Menu features a variety of items, including a double cheeseburger and the McChicken sandwich, all for just $1. Last year the burger giant also launched a breakfast version of the Dollar Menu in select markets.

McDonald’s also offers a number of menu items for just slightly more than $1, including its new Snack Wrap. Priced at about $1.29, Proud said value has played a critical role in the success of that product.

Dublin, Ohio-based Wendy’s International reported same-store sales increases of 3.8 percent for U.S. company-operated restaurants and 3.7 percent for U.S. franchise restaurants in the first quarter of 2007 and cited the importance of a value menu to its success. Among the chain’s value-focused offerings is the Super Value Menu, which features approximately 10 items priced from 99 cents to $1.09.

In January, the chain further expanded its value offerings by rolling out the Deluxe Value Meal, a combo featuring a double cheeseburger or a crispy chicken sandwich, small French fries and a 20-ounce soft drink for $2.99.

“It’s not our first time with a value menu, but it’s the first time we’ve found one that meets demands and satisfies consumers,” said Michael Kappitt, Burger King’s vice president of consumer insights and performance analysis.

The Whopper Jr., a downsized version of the chain’s flagship burger, is the centerpiece of the 10-item menu. Six of the items are national and priced at $1, while four others vary by market and can be priced up to $1.29.

Although he declined to reveal specifics, Kappitt said that the 15-month-old value menu has definitely had a positive impact on the chain’s traffic and sales.

Given the current economic environment, NPD’s Riggs said that a value strategy is a must. While she thinks operators without one should adopt one fast, she doesn’t believe that those with existing value offerings can rest on their laurels.

Among the opportunities for improvement, she said, is consumer satisfaction. While more consumers are ordering from value menus, they aren’t necessarily more satisfied with their experience. According to the data, value menu customers tend to rate quick-service restaurants lower than the total of quick-service customers on key food attributes.

Attributes such as “food prepared the way I liked it,” “taste and flavor of the food,” “size of portions,” “pleasant friendly service” and “fast, efficient service” were rated “excellent” less often by value/dollar menu customers than total quick-service customers.

“A small drink for a dollar is not a good value proposition,” Riggs said. “Not when you can go into a c-store and get a large drink for a similar price.”