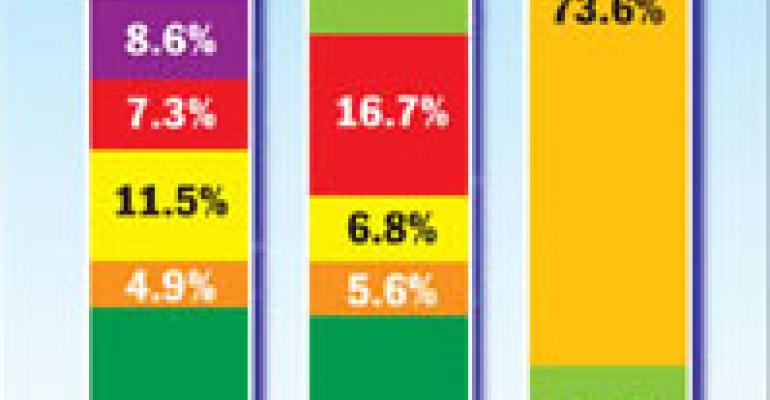 While globalization has blurred the boundaries between countries in the past few decades, when it comes to consumers’ eating habits, there is still a cultural divide between the United States and the rest of the world. For that reason, quick-service operators looking to expand their brands outside of the United States need to customize each unit to meet the specific needs of consumers in the country and region they seek to enter, say officials at market research firm The NPD Group.

“In the U.S., we think the market looks a certain way,” said Bob O’Brien, NPD’s president of global foodservice development. “Within each country there are some similarities…the hamburger category, there is always a sandwich market. Different products are going to have to play different roles if [operators] want to take advantage of the key restaurant categories that exist in each country.”

According to new data from Port Washington, N.Y.-based NPD, one of the major market differentiators is the way consumers outside of North America use quick-service restaurants. while quick service attracts about half of consumer visits in many countries, only in the United States does it also capture more than half of the spending. In the year ended June 2006, quick service captured 58 percent of the share of spending in the United States. The segment grabbed 48 percent of the share of spending in Canada in the year ended May 2006, followed by 41 percent in Great Britain, 39 percent in France, 38 percent in Spain, 37 percent in Germany and 29 percent in Japan.

“No two of these markets are the same,” O’Brien said. “QSR hamburger has been imported, but there are certain things that distinguish these other markets.”

The coffee, doughnut, muffin and cafeteria category captures a large share of visits in both Canada and Spain. In the year ended June 2006, the category accounted for 36 percent of quick-service visits in Spain, where there are an abundance of small local restaurants, called cafeterias, at which consumers can eat appetizers and snacks standing at a counter or bar. In the year ended May 2006, coffee, doughnut, muffin and cafeteria accounted for 33 percent of quick-service visits in Canada, where the Tim Horton’s chain makes up a huge chunk of that market.

Retail and convenience stores make up the bulk of quick service in Japan. Vastly different from the United States, these Japanese grab-and-go stores carry a wide selection of traditional foods, such as rice balls, steamed buns and bento boxes, which are prepared fresh each day, and a variety of beverages and some sundries. In the year ended June 2006, retail and convenience accounted for nearly three quarters of quick-service visits in Japan.

“These are finely tuned to satisfy the needs of the marketplace,” O’Brien said of the Spanish cafeterias and Japanese retail and convenience stores. “They are selling what the market already consumes.”

While each culture or region, and even each neighborhood, has its own taste preferences, some categories seem to travel well across all borders.

Hamburger is big just about everywhere, NPD found. In the previous year, the hamburger category accounted for one quarter or more of all quick-service visits in the United States, Canada, Germany, Great Britain and France.

“Chains play a much smaller role in all these countries than they do in Canada or the U.S,” O’Brien said. “It’s really a market made up of independents.”

With the international markets so drastically different from the domestic market, U.S. operators looking to expand across the pond could easily find their brands lost in translation.

“I’m not saying there aren’t opportunities,” O’Brien said. “It’s just more complicated to run a food business. It’s not the same thing in the U.S.”

Among the major chains that have found ways to successfully transplant their brand is Oak Brook, Ill.-based McDonald’s Corp., which opened its first European unit in the Netherlands in 1971 and now has more than 6,400 units in 40 markets throughout Europe.

“It’s all about being relevant to our customers,” said McDonald’s Europe spokeswoman Caroline Weber. “Across Europe with 40 different markets, there are 40 different sets of tastes. There are also differences within each market.”

One way McDonald’s tries to remain locally relevant in Europe is with its McCafe concept. Designed to appeal to European consumers’ penchant for relaxed dining, McCafe is a European-style restaurant within existing McDonald’s units. McCafes serve specialty coffees and teas, pastries, and cold sandwiches in a laid-back atmosphere. Part of McDonald’s re-imaging program, there are 419 McCafes in Germany, Italy, Portugal, Russia and Spain, with several hundred more scheduled to open by the end of 2007. The concept has really taken off in Germany, where 213 McCafes opened in 2006 alone.

“We are a local market, but a global brand,” Weber said.

Being locally relevant also plays into the growth strategy for Seattle-based Starbucks, which opened its first non-North American unit in Japan in 1995 and now has 4,101 international stores in 43 countries.

“There are a lot of consistencies about us, but every store is different depending on the neighborhood,” said Bridget Baker, a Starbucks spokeswoman. “You can’t take something that is right in [one] culture and expect it to work in another.”

One tactic Starbucks uses to make sure each store works for its clientele is to open stores with cooperators. In most of the company’s overseas markets, stores are opened as joint ventures with a partner that knows the indigenous culture and the specifics of that market, Baker said.

“We don’t know everything,” Baker said. “We can learn from their expertise and find the right mix for that market.”