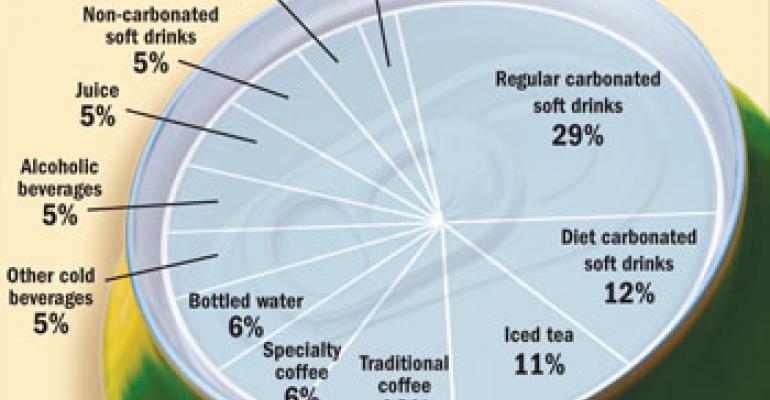 NPD: Guests cutting back on soda, filling up on teas, coffee

According to new data from market research firm The NPD Group, for the last five years consumers have been steadily cutting back on traditional carbonated soft drinks in favor of newer and more innovative offerings such as iced tea, specialty coffee, smoothies and slushies.

“While consumers have been purchasing more and more beverages from restaurants, they have been expanding their horizons beyond traditional carbonated soft drinks,” said Bonnie Riggs, an analyst for Port Washington, N.Y.-based NPD. “Consumers are thirsty for choice.”

“I don’t think operators or suppliers are aware of that big of a shift in share,” Riggs said.

Though carbonated soft drinks still account for the biggest share of the beverage market, the largest incremental-servings gains are coming from iced tea and specialty coffee. For the year ended in July, there were 474 million more servings of iced tea, a 10-percent increase over a year earlier, and 373 million more servings of specialty coffee, a 15-percent increase over a year earlier. During the same period, smoothies and hot chocolate also posted double-digit gains. Other top-growing beverages included frozen soft drinks, bottled water and traditional coffee.

While some of these beverages appeal to only a certain segment of the industry or particular demographic groups, the popularity of iced tea is widespread, NPD found. For the year ended in July, iced tea was among the top three fastest-growing beverages in the quick-service, quick-service retail, midscale and casual-dining segments. The data also reveal that iced tea is popular, and growing, with both men and women. In addition, adults under 24, the group cutting back on carbonated soft drinks most, are contributing most to the servings growth of iced tea.

Iced tea may be performing so well because it offers not only a wealth of variety, but it fulfills consumers’ desire for more healthful choices, another big beverage trend, industry experts say.

Though beverages are one of the first things consumers tend to leave off when trying to watch their wallets, that doesn’t seem to be happening as the economy slows this time around. Instead of dropping beverages, many consumers are replacing a food or snack item with a beverage, NPD found.

“The only [daypart] we’re seeing growth in is at the snack daypart…very unusual in difficult economic times,” Riggs said. “I think these are things [consumers] are craving.… ‘That’s my treat.’”

A growing number of quick-service operators, many of which used to rely primarily on carbonated soft drinks to bring in big beverage bucks, have been aggressively expanding their beverage menus in the hopes of finding new drinks that have price-value equations that please consumers and the bottom line.

“Sodas and carbonated soft drinks are still the lion’s share of our [beverage] business and what customers are looking for from fast food,” said John Schaufelberger, senior vice president of global product marketing and innovations for Burger King Corp. “Customers are always looking for more choices.… They don’t always feel a carbonated soft drink is the right choice.”

Among the No. 2 burger chain’s most successful new beverage choices is the Mocha BK Joe, coffee blended with chocolate syrup and poured over ice, priced at $1.99, which Schaufelberger says has “exceeded all expectations.” In addition, the 7,700-unit chain recently launched the Oreo BK Sundae Shake, a dessert-drink hybrid made with soft-serve ice cream and chunks of cookies offered at $1.99 for a small and $2.49 for a medium. Burger King also is currently testing several energy drinks, Schaufelberger said.

“Beverages are a great business opportunity for McDonald’s, given the overall size of the category. But in order to capture that opportunity, customers are looking for different beverage choices than what we offer today,” Alex Conti, senior director of menu management at McDonald’s USA, said in an e-mail.

So far, the new beverages have been successful for McDonald’s. Following the introduction of its premium roast coffee in 2006, McDonald’s says it saw double-digit annual increases in average monthly units sold, and year-to-date premium roast coffee sales are up versus the same period last year. In addition, since launching iced coffee and sweet tea last year, the company said most of its restaurants have shown significant positive sales growth.

In an effort to provide further value to consumers, the burger chain has used aggressive drink-pricing tactics. For example, Mickey D’s Sweet Tea has an everyday price of $1, and in many markets nationwide McDonald’s offered any sized drink or tea for $1 for a limited time this summer.

Consumers can expect even more variety in the near future, as the burger chain said it’s working with its beverage suppliers to test an array of new drink options, including bottled beverages and a greater variety of fountain drinks.

With better-for-you nonalcoholic drinks performing so well, a few months ago Obert began mixing fruit juices, especially pomegranate, into his martinis to create an “antioxidant martini.”

“Consumers know the profit margins [of carbonated soft drinks]…the price-value, it’s just not there,” Riggs said. “The key to whatever [operators] do is that the consumer sees the value in it. If the price-value is there, they will pay.”