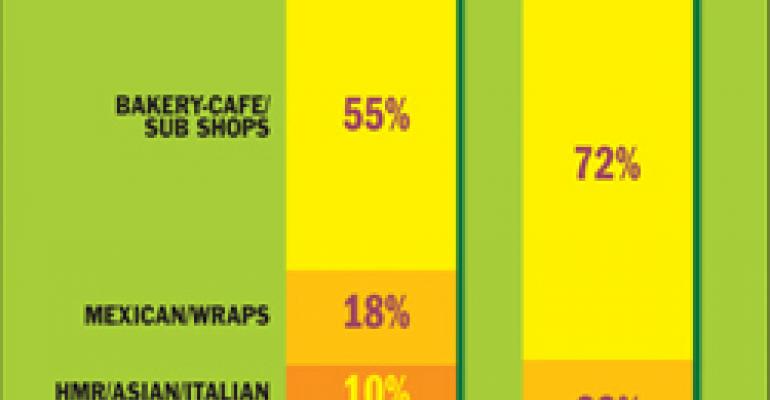 In the past decade, American consumers have fallen in love with the fast-casual dining segment and have flocked to the growing number of chains offering casual-dinnerhouse fare at a fast-food pace.

But even as such concepts as Chipotle Mexican Grill and Panera Bread continue to soar, others have sputtered to the ground, supporting new data from The NPD Group that indicate consumers are still smitten with the segment, just not all categories.

While fast casual accounts for just 3 percent of the restaurant industry’s traffic, it outpaces other segments in terms of growth and traffic trends, according to the Port Washington, N.Y.-based global market research firm. In the year ended November 2002, the segment’s growth rate was 11 percent, according to NPD. While that rate has vacillated since, it remained strong at 10 percent for the year ended November 2006.

Consumers are still drawn to the fast-casual segment, “but not all fast-casual chains equally,” said Bonnie Riggs, an NPD restaurant industry analyst.

In the past 12 months, the bakery-cafe/sub shop category expanded units at a double-digit rate, while the Mexican/wraps and burger categories expanded at single-digit rates, according to NPD. Meanwhile, the bagel/soup and salad category and home meal replacement/Asian/Italian category closed units in the same time period.

Denver-based Qdoba Mexican Grill is among the thriving fast-casual Mexican chains. Founded in 1995, the 352-unit chain has experienced 31 consecutive quarters of positive same-store sales gains, according to the chain.

“The formula for real sales growth… [is to] go in and penetrate a market,” said Gary J. Beisler, Qdoba’s president and chief executive.

Privately owned Atlanta Bread Company also grew rapidly in the early part of the decade, opening as many as 40 units in one year.

“The growth was good, [but] we probably grew too fast,” said Chris Campagna, vice president of marketing for the Atlanta-based bakery-cafe chain.

Traffic at the chain has remained strong during lunch and increased during nonpeak hours, such as 9 a.m. to 11 a.m. and 2 p.m. to 5 p.m. Sales also have increased 10 percent to 15 percent during these times, Campagna added.

The company currently is focusing on its more than 140 stores and will test a rebranding effort next quarter in Atlanta, Campagna said. It plans to expand more modestly in the near future, opening just five to 15 units in 2007.

While the increased traffic at many fast-casual concepts can be attributed to unit expansion, NPD’s data also reveals that the bakery-cafe/sub shop and Mexican/wrap categories are pulling in more customer traffic even at older locations.

While the bakery-cafe/sub shop category recorded a 15-percent increase in traffic for the year ended November 2006, only 8 percent was due to unit growth. During that same period, the Mexican/wraps category saw traffic increase by 14 percent, with only 7 percent attributed to unit expansion.

“If you take the unit expansion piece out of it, they are doing exceedingly well,” Riggs said.

According to Au Bon Pain, traffic at the 255-unit, Boston-based chain is up 4 percent over last year, and same-store sales were up 9 percent during the six-month period ended in March. Yet, the chain has not added any new units in the past five years.

The growth at existing stores can be attributed to “consistency in a high-quality offering,” said Ed Frechette, senior vice president of marketing for Au Bon Pain.

While unit expansion has been on hold for several years, Frechette said the chain is “poised for growth” and plans to open eight units in 2007.

No matter what their age, consumers are more satisfied than ever with their overall experiences at fast-casual chains. According to NPD data, satisfaction has been increasing since 2001. That year just 32 percent of consumers rated their overall experience as “excellent.” In 2002, the rating increased to 35 percent and remained there in 2003. In 2004 it increased to 37 percent. It dipped slightly to 36 percent in 2005, but moved up to 37 percent in 2006.

Although consumers were more satisfied with their fast-casual experiences, their intent to revisit slipped slightly. Fifty-eight percent of consumers said they “will definitely go there” in 2001, compared with only 49 percent in 2006. One reason for the slip, Riggs said, could be that the novelty factor may be wearing off as the segment matures.

Satisfaction also has increased at quick-service chains during the past five years, NPD found. Industry observers attribute the improvement to efforts quick-service chains have made to better compete with fast-casual players, such as improving food quality and adding premium products.

According to the data, 28 percent of quick-service consumers rated their overall experience as “excellent” in 2006, compared with 21 percent in 2001. Consumers’ intent to revisit quick-service chains has held steady at about 47 percent.

“[Consumers] are more satisfied with major quick-service restaurants than they have been before, but they still don’t rate them as high as major fast-casual restaurants on overall satisfaction,” Riggs said.

Quick service is best known for giving time-strapped, cost-conscious consumers fast food at a value, but “at fast-casual, it’s all about the food,” Riggs said.

When it comes to evaluating their overall dining experience, fast-casual consumers gave the highest ratings to the food. In the year ended November 2006, consumers’ top-rated attributes for fast casual were accuracy of order, 51 percent; taste and flavor of food, 46 percent; food prepared the way I like it, 44 percent; and quality of food served, 43 percent. During the same period, quick-service food attributes received ratings of only 29 percent or 30 percent, Riggs said.

“The American diner has become more and more sophisticated… [and] they are looking for a higher-quality, quick-dining experience,” Walker said.

While consumers may be pleased with fast-casual food, they’re not happy about how much they have to pay for it. In 2006, the average fast-casual check was $6.50—$1.90 more than at major quick-service chains. According to the data, consumers considered fast casual’s affordability its least-attractive quality.

While consumers may not like to pay more, some operators argue that they do so because, for them, value is about more than low price.

“It’s about enticing people with food, as opposed to a discount,” said Frechette of Au Bon Pain.

Among the items drawing customers to Au Bon Pain are the new Harvest Rice Bowls, which feature steak, shrimp or chicken served over hot steamed rice and topped with a salad of field greens, tomato, cucumber, red onion and carrots. Rolled out in January, the bowls immediately began generating 2 percent of the chain’s overall sales.

At Qdoba, consumers are served what the chain calls modern, nouveau Mexican cuisine, a blend of contemporary cuisine and Mexican fare. Beisler said the chain prides itself on its unique flavors. Entrées, which range in price from $5 to $7, include such offerings as a poblano pesto burrito, Mexican gumbo and a grilled-chicken mango salad.

“People are willing to pay for flavor, taste and variety,” Beisler said. “It’s worth $6 if you can’t get it anywhere else.”

With quick-service chains upping the ante by offering premium products at low prices and casual-dining chains serving high-quality food with quick-service-like speed via carside delivery, fast casual continues to have a lot of competition.

To stay competitive, Riggs says fast-casual operators must remember that freshness and taste of food are the segment’s key selling points.

“Fast casual has to continue to market to its strength,” Riggs said, “and has to consider…that price/value perception.”