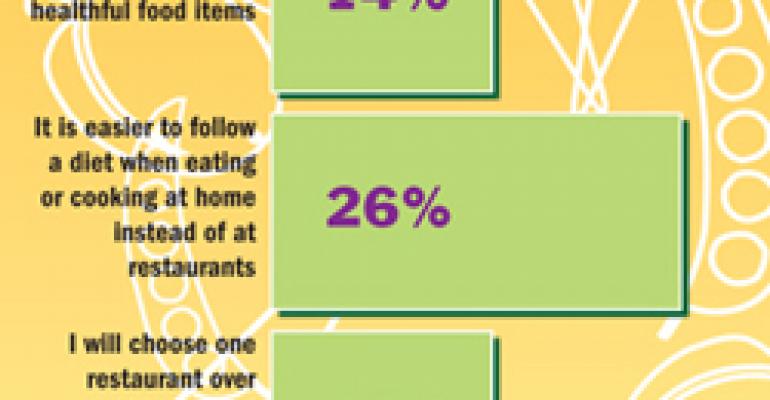 As restaurateurs expand the number of better-for-you menu options available to patrons, they also need to do a better job marketing those efforts to the growing ranks of health-conscious consumers, according to new data from The NPD Group.

In a recent survey the Port Washington, N.Y.-based market research firm found that consumers are dieting less, eating more better-for-you products at home and increasingly seeking out restaurants that offer such options.

“It’s about marketing, it’s not about product movement,” said Harry Balzer, vice president of NPD. “Operators should be flexible, they should be looking for opportunities to provide products that are better-for-you with added benefits that they can add and be prepared to remove them from the menu.”

Consumers’ perceptions of health have changed through the decades. Today, many consumers think being healthful means including better-for-you foods in their diets, versus being on diets or eliminating from diets harmful substances or ingredients, such as cholesterol or sodium, NPD found.

According to NPD, the number of products Americans consume per day with a label indicating a perceived health benefit, such as organic, light or whole grain, has increased every year for the last four years. In the year ended in February 2008, the average American ate at least two and a half better-for-you products per day, up from just over one and three-quarters in 2004. In addition, in 2007, just 22 percent of American adults said they were on a diet, the lowest number since NPD began tracking such information several years ago.

Consumers are not only eating better-for-you-products at home, they increasingly are looking for them at restaurants, NPD found. Last year, nearly 3 percent of all visits to a restaurant were motivated by the desire for something healthful or light to eat.

The consumer groups most concerned with making more healthful food choices are adults aged 18 to 34 and high-income households, NPD found. In the year ended May 2008, consumers 18 to 34 accounted for 32 percent of all so-called healthy/light visits to restaurants. During the same period, consumers with household incomes of more than $100,000 accounted for 26 percent of all healthy/light visits to restaurants.

Those seeking something healthful to eat tend to find it most often at sandwich concepts, food and drug stores, and quick-service restaurants with varied menus, NPD found. Twenty-two percent of all traffic seeking healthy or light choices occurs at sandwich concepts, 9 percent occurs at food and drug stores, and 4 percent occurs at quick-service restaurants with varied menus.

The snack daypart is seeing the most growth in better-for-you products, according to NPD. In 2007, more than half of all consumers reported eating a better-for-you item in between meals, up from 44 percent in 2004.

Chains from McDonald’s to T.G.I. Friday’s now are offering downsized versions of popular items, which are often lower in calories, or new better-tasting “light” products, and some also are finding innovative ways to promote those products to health-conscious consumers.

Some chains are aligning themselves with organizations committed to healthful eating, such as Healthy Dining, a San Diego-based group supported by the Centers for Disease Control and the National Restaurant Association that works with restaurants to develop healthful offerings. The company’s website, HealthyDiningFinder.com, lists more than 55,000 locations from about 225 brands that have at least four meals with fewer than 750 calories and 25 grams of fat.

“[It] helps them position themselves as meeting the needs of consumers,” says Healthy Dining president and founder Anita Jones. “If the restaurant industry can really move forward in showing they have a selection of healthier options, that is what is going to improve health …[and] take the pressure [and] the blame off restaurants.”

Costa Mesa, Calif.-based El Pollo Loco has long had healthful menu offerings, but it wasn’t until 2002 that it began to really promote them through advertising campaigns, an interactive website and by aligning with organizations such as Healthy Dining.

“We’ve absolutely seen positive response from our guests,” said Julie Weeks, vice president of communication for El Pollo Loco. The more than 380-unit chicken chain’s healthful offerings are built around its core product, a citrus marinated, flame-grilled chicken dish, and include low-fat and/or low-calorie items, such as chicken meals in a variety of portion sizes, a skinless chicken breast meal, and chicken tortilla soup. Customers can also customize their meals by choosing healthful side dishes, such as steamed vegetables, a side salad or pinto beans; by swapping out the chain’s signature creamy cilantro dressing for a light version; or by using one of four freshly made salsas instead of other high-fat and high-calorie condiments.

“It’s all about providing guests with options,” Weeks said. “You can’t provide everything to everyone. What we do is let them customize.”

Columbus, Ohio-based Damon’s Grill began its relationship with Healthy Dining in 2006 after it saw a need to offer more variety to appeal to its female guests.

“When we heard about , we thought it was a great idea to have a central place for people to go to find restaurants with healthier options and got on-board with them immediately,” said Cara Adams, Damon’s director of marketing.

The more than 80-unit chain previously had just three entrées that were considered more healthful on its menu. As a result of the partnership, Damon’s will roll out this month a new, more healthful menu featuring seven entrées, five side dishes, three salads, one appetizer and one desert that meet Healthy Dining’s guidelines.

Consumer interest in healthful offerings is not likely to wane, according to industry observers.

“It’s gradual, predictable, unstoppable,” said Dennis Lombardi, executive vice president for Columbus, Ohio-based WD Partners, a consulting firm specializing in design and development, of the health trend. “Operators that are behind the curve [in offering healthful options] need to figure out if they can continue to be successful in a niche that will be a slowing, shrinking base of customers.”

Operators hesitant to offer more healthful options may be concerned that they have to change their entire operations to meet consumers’ needs. But according to Jones of Healthy Dining, many restaurants already have better-for-you options on their menus—or items that could easily fit the guidelines if consumers are allowed to make special requests to remove a fattening ingredient—they just need to point them out to consumers.