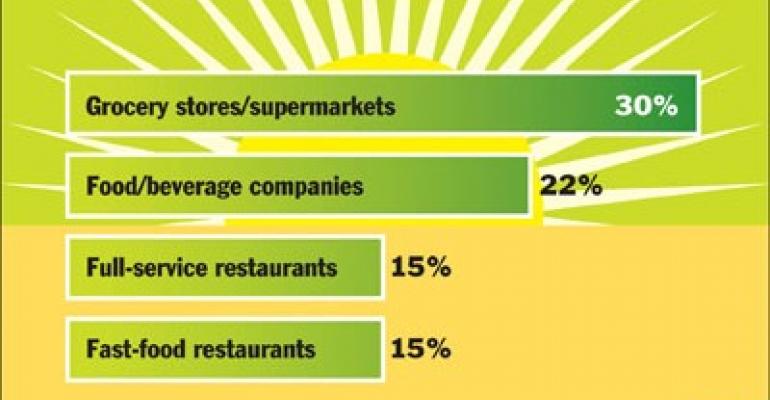 NPD: Consumers perceive industry to be behind on green efforts

Although the “greening” of the restaurant industry began decades ago as a grassroots effort by a handful of independent operators, today it is a mainstream movement, embraced by a growing number of operators of all sizes and in all segments. Many consumers, however, don’t recognize that—and it could be costing operators.

Despite the industry’s efforts to make operations more environmentally friendly, consumers say they don’t view restaurants as making much progress, according to a new study conducted by The NPD Group. That’s a shame, NPD found, because there’s more than just a warm, fuzzy feeling to be gained by operators that earn consumers’ “green” thumbs-up. When it comes to food, mainstream diners are not only ready for environmentally friendly cuisine, but also willing to pay a premium for it, according to the Port Washington, N.Y.-based market research firm.

“Restaurants are not doing well in consumers’ minds,” said Kyle Olund, senior product manager for NPD. “There’s a strong indication that consumers are supportive of restaurants’ [green] behavior. … There’s an opportunity there.”

In a ranking of nearly a dozen major industries, restaurants landed at the bottom in terms of consumers’ perception of their progress toward becoming eco-friendly, NPD found. Both full-service and quick-service restaurants ranked below grocery stores, supermarkets, and food and beverage companies.

Only 15 percent of consumers surveyed said quick-service outlets were making good progress toward becoming environmentally friendly, and only 15 percent said the same about full-service restaurants, NPD found. In contrast, 30 percent of respondents said grocery stores were making good progress, and 22 percent said food and beverage companies were. Consumers perceived appliance companies, grocery stores and supermarkets, and automobile manufacturers as making the most progress.

Consumers’ lack of awareness of the steps many operators are taking may be one reason restaurants ranked so low. The industries that consumers perceived as making more progress seem to do a better job of getting the word out, Olund said. For example, she noted that today’s consumers are very aware that grocery stores offer organic products and reusable bags. Part of the problem may also be that many of the eco-friendly practices that restaurants have implemented, such as recycling, energy-efficient equipment or the use of green building materials, occur out of consumers’ view.

“Consumers don’t really have a good understanding of what companies are doing,” Olund said.

Another reason for the low opinion of the industry’s progress, green experts say, could be that consumers are closer to the environmental impact of the food they eat than to the impact of other products.

“When you go to a restaurant, you have a very visceral experience of the amount of food that might be wasted [and] the amount of garbage that is created,” said Michael Oshman, founder of the Green Restaurant Association, or GRA, a Boston-based nonprofit organization dedicated to assisting the restaurant industry in becoming environmentally sustainable. “The impact of those [other] choices [is] 10,000 miles or five years into the future.”

“I think that means that consumers need more motivating to incorporate greenness into how they choose a restaurant,” Olund said.

While upscale consumers were once among the select few interested in purchasing organic, sustainable or “clean” food, today that audience has broadened, NPD found. The consumers who said they would be more inclined to purchase the green sandwich reflected a mix of adults from various demographic and economic levels.

“This suggests green items have a very high appeal to consumers,” Olund said. “[They] are ready for the mainstream.”

The data also reveal that there are significant halo benefits of green products. For example, even though the ingredients in both sandwiches were similar, consumers’ perceptions of the quality and healthfulness of the green sandwich were higher than that of its nongreen counterpart by a wide margin, NPD found.

While such benefits may prompt many operators to increase the greenness of their operations, finding the best way to do so can be confusing. From ways to reduce garbage or recycle, to energy-efficient equipment, eco-friendly building materials and sustainable foods, the paths to greener operations are varied.

“Obviously, there are all kinds of things restaurants can do … but the most direct way really is their menu,” Olund said. “That’s the most telling of consumers’ interest and [behavior] that supports green initiatives.”

Nearly half of consumers believe it is important for restaurants to be “green,” but fewer say they actually seek out eco-friendly restaurants(% of total respondents who strongly/somewhat agree)

Operators thinking of changing menu items might look into a product category that has a high consumer demand, or perhaps take a big seller and add a green attribute to it, Olund said. However, she added, operators also need to consider convenience, which is still a major factor for consumers, and the cost of making such changes.

But some operators point out that being truly green takes more than adding new items or adjectives to the menu.

Denver-based Chipotle Mexican Grill is among a handful of chains that have been extremely successful serving up food with a conscience. In the first quarter of 2008, revenue grew nearly 30 percent and same-store sales increased more than 10 percent at the 730-unit, fast-casual chain, which is committed to serving food that’s unprocessed, seasonal, family-farmed, sustainable, nutritious, naturally raised, hormone-free, organic and artisanal.

“You’re in or you’re out,” said Jim Adams, executive director of marketing for Chipotle. “You can’t do this half-assed. [Adding a green menu item,] it’s like lipstick on a pig. It’s window dressing.”

Jason R. Brown, founder and chief executive of Seattle-based Organic To Go, agrees that sustainable food should not be approached as a fad.

“Organic is normal for me, it’s a normal part of my life,” Brown said. But, he added, “I believe there will be other [restaurants] that will go organic and natural.”

The 26-unit fast-casual chain recently added Pizza Organico, a new line of organic stone-hearth pizzas, to its offerings. Delivery of the pizzas via hybrid vehicles is available in all four of its markets. Rolled out in early April, the pizzas already have increased the chain’s sales and traffic, Brown said.

“All of a sudden people are turned on to [the green] concept, now how do they do it,” said GRA’s Oshman. “On some level it’s more of a challenge in this industry.”

More operators are willing to meet that challenge, Oshman said. There are currently about 250 GRA-certified green restaurants, up from just 70 in 2006. Oshman anticipates that number to more than double by the end of 2008.

While he acknowledges the challenges the industry faces in becoming more environmentally friendly, he is also quick to point out that patchwork or quick-fix remedies aren’t the answer.

“The only way for a service business to tap into this [is to] have some vision and have a longer-term strategy,” Oshman said. “It’s not daunting, but it is a challenge for businesses to tackle this on their own.”