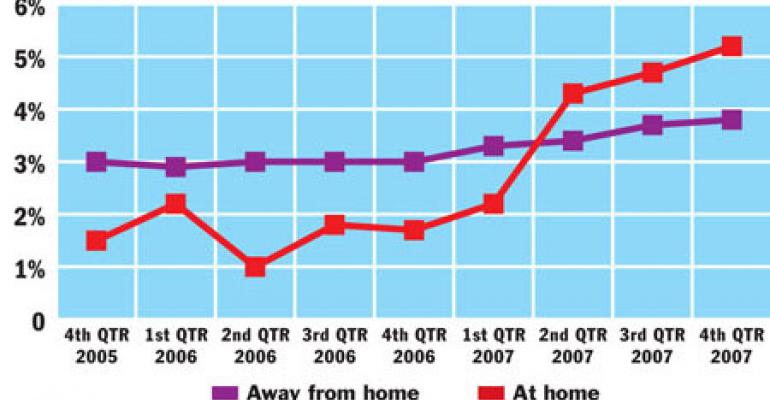 Whether the country experiences a recession or not, American consumers already feeling the pressure of these difficult economic times are proving they aren’t prepared to do without, just with a little less—as in less food when dining out.

According to new data from market research firm The NPD Group, consumers are continuing to dine out, but they are reducing their restaurant spending by visiting less expensive restaurant categories, opting for cheaper dayparts, reducing their order sizes, and forfeiting add-ons such as beverages, side dishes and desserts.

“People are trading down not just in segments, but in the categories they choose and the food items they choose,” said Bonnie Riggs, an analyst for Port Washington, N.Y.-based NPD. “Consumers are finding ways to modify that check.”

Despite rising inflation, particularly food inflation, restaurants are seeing only modest increases in what consumers are spending on meals. Retail food prices increased significantly last year, making 2007 the priciest year since 1990, say industry experts. But, according to NPD, the average eater check at restaurants grew by slightly less than 2 percent for the year ending November 2007, from $6.12 to $6.23.

“Rising food prices both in home and away from home will likely be the biggest issue facing the foodservice industry in 2008,” Riggs said.

Consumers are containing their check size by trading down to less expensive restaurant categories and visiting during cheaper dayparts, such as the breakfast and snack occasions, NPD found.

Evidence of that trading down can be found in the number of higher-priced categories that are struggling the most, Riggs said. For example, quick-service Asian and pizza purveyors as well as casual-dining seafood and steak operators are experiencing slower traffic than their less expensive competitors, she noted.

But no matter what segment, category or time of day they visit, consumers are ordering fewer items, sharing dishes, downsizing from entrées to burgers and sandwiches, ordering from value menus or purchasing snacks, and taking advantage of special promotions or price coupons.

Such check-trimming tactics are evident in the increase in servings of burgers at both quick-service and casual-dining venues, while servings of entrées, appetizers, side dishes and desserts are on the decline.

NPD also found that French fries had the biggest decline in servings of any food item this year, and that servings of both diet and regular carbonated and noncarbonated soft drinks saw big declines as well.

As consumers change their purchasing behavior in anticipation of leaner times, operators of all sizes and segments are rolling out programs they hope will lure more customers in their doors, while also enticing them to part with more of their shrinking food dollars. Earlier this year, the top three quick-service burger chains gave consumers more for their money by adding double cheese-burgers to their $1 menus. Value pricing began showing up in the casual- and family-dining segments as early as February 2007, when leading players such as T.G.I. Friday’s started rolling out multicourse meal deals and mini entrées at bite-sized prices.

Hit hard by penny-pinching consumers trading down to lower-priced concepts within the same segment, higher-priced categories, such as casual-dining seafood and steak, are seriously stepping up their value game. For example, Culver City, Calif.-based Sizzler USA’s “Steakhouse Favorites” promotion, featuring an 8-ounce steak, baked potato and Caesar salad for just $8.99, was available systemwide last fall. The chain has since launched other value-based limited-time offers, including “The Penny Sale,” a two-day, buy-one-steak-get-one-for-a-penny deal honoring the chain’s fiftieth anniversary, and a comfort food campaign, featuring new product rollouts all under $8.

“We will continue to do these [value deals] for all of 2008 to increase guest counts, maintain check average and create frequency,” said Mike Branigan, Sizzler’s vice president of marketing.

With so many operators reporting positive results from meal deals, chains like Sharon, Pa.-based Quaker Steak and Lube have begun experimenting with new value-based promotions as well. The 26-unit chain currently is testing its Full Throttle Meals promotion, a $12.99 make-your-own-meal combo, in select locations to “give consumers a value and drive more traffic,” a spokesperson said.

While limited-time offers have always been a part of the value equation, price-cuts alone will not draw in even the most cash-strapped consumer, industry experts say.

“[Restaurants] have to create a better experience in terms of a value equation to keep customers coming when the customers are more concerned about outgoing discretionary dollars,” said Dennis Lombardi, executive vice president for Columbus, Ohio-based WD Partners, a consulting firm specializing in design and development.

Like many operators, Glendale, Calif.-based IHOP is luring economically squeezed consumers with limited-time offers, such as a new all-you-can-eat-pancakes promotion priced as low as $4.99. However, the 1,344-unit chain, which has reported 20 consecutive quarters of positive comparable-store sales, also is focusing on improving the overall dining experience for customers. In early 2007, the pancake chain launched its “Service as Good as Our Pancakes” initiative, intended to better train employees in the nuances of delivering great service, the company said.

“When you are fighting a battle, a low price is a point of entry,” said Patrick Lenow, IHOP’s director of communications. “To extend that [sales] streak, [the need to] focus on service is key.”

Seattle-based Starbucks is testing $1 coffee and free refills in its hometown stores. According to a company statement, the $1 coffee test is another effort to “connect with the customer and provide the best Starbucks experience.” But the java giant also is focusing on making sure its employees know how to brew that perfect cup of joe. The Seattle Times recently reported that on Feb. 26 Starbucks would close 7,100 of its stores nationwide for three hours during the early evening in an effort to retrain in-store employees and store managers.

While the restaurant industry historically has fared better than others during economic downturns, it is by no means recession proof, industry experts say. So what’s the best tactic for getting consumers to eat more and more often during difficult times?

“The one key thing that operators need to focus on is that consumers need to get value for every single dollar they spend,” said Aaron Noveshen, founder of San Francisco-based The Culinary Edge, a culinary-development firm. “[Operators have] to step up their game on all fronts.”