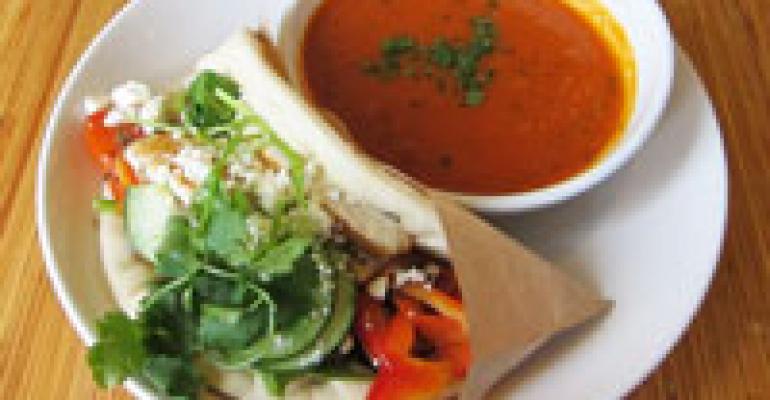 The sandwiches are being offered in Noodles & Company stores in Ohio, Kentucky and Colorado, and the chain said it plans to roll them out to additional markets this spring.

The three Sandwich Duo meals all include a side soup or salad and vary in price from $5.50 to $7.25. The Mmmeatball, based on Noodles’ Spaghetti and Meatballs dish, is made with five large meatballs with marinara sauce and Parmesan cheese on a cibatta roll. Wisconsin Cheesesteak, a riff on chain’s popular Wisconsin Mac & Cheese dish, is made with beef, that same Mac & Cheese sauce, cheddar jack cheese, red onion, peppers and mushrooms on a ciabatta roll. The Med, inspired by the Med salad already on the menu, includes chicken, mushrooms, peppers, cucumbers, red onion, Zippy Med dressing, cilantro and feta, encased in flat bread.

Employees building sandwiches in the back of the house for their own consumption drew management’s eye, but in a good way, said Jill Preston, director of corporate communications for the pasta chain.

"We knew there was something to the idea, because our restaurant team members have been making sandwiches with our ingredients behind the scenes for years," she said. "We also understand that people aren't always in the mood for pasta, so we're offering the same fresh, tasty ingredients found in our noodle dishes in the form of a sandwich."