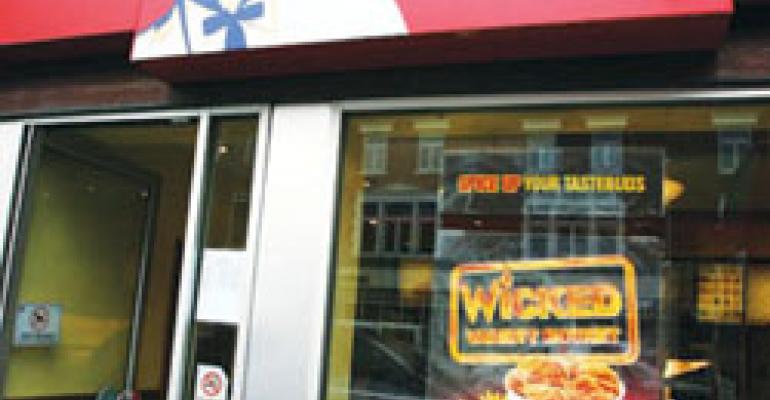 More fast feeders are looking at ways to table the amount of salt in their menu items as scrutiny mounts on sodium’s health effects.

Yum! Brands Inc., parent of the KFC, Pizza Hut and Taco Bell brands among others, is the latest company to announce that it would look at ways to reduce sodium levels in its foods given the health risks, such as heart disease, associated with consuming too much salt. Burger King and Au Bon Pain also have announced such initiatives.

“Our leading brands in the U.S.—KFC, Pizza Hut and Taco Bell—are working hard to reduce the sodium content in their product formulations,” Yum said in a corporate-responsibility report issued Dec. 9. “Sodium reduction remains a major challenge to the food industry in terms of taste and formulation as salt is a vitally important compound in cooking. We recognize we have an opportunity and a responsibility to make our consumers aware of their sodium intake and to offer food with lower sodium content.”

The report further stated that the Louisville, Ky.-based company has reduced sodium content in its foods at overseas locations. For example, KFC in the United Kingdom has reduced the amount of salt it uses by more than 85 tons a year. In Australia, the chain currently is testing products with reduced sodium content. In South Korea, Pizza Hut restaurants are introducing cheese with 25 percent less sodium and pepperoni and meat toppings with 40 percent less sodium. In Canada, KFC and Pizza Hut are conducting consumer research on sodium reduction.

When contacted by Nation’s Restaurant News, Yum, which operates or franchises nearly 36,000 restaurants in more than 110 countries and territories, did not indicate when it plans to introduce the reduced-sodium items domestically.

At Au Bon Pain, the 220-unit, Boston-based bakery-cafe chain, Ed Frechette, senior vice president of marketing, said a number of reduced-sodium items are in test and will be rolled out systemwide in 2009.

“We have plans to reduce sodium in over 20 items,” he said. “Our supplier is doing the work now. First they’ll do the formulations, and then we’ll conduct taste tests in a fine-tuning process to make sure it’s close to what we currently offer.” He said the tests would be conducted in increments to avoid rolling out items that “taste too different or are too bland.”

In November, Miami-based Burger King said it is committed to marketing kids’ meals to children 12 years or younger that contain no more than 600 milligrams of sodium in each meal.

Burger King’s move to limit sodium in its Kids Meals is the chain’s latest initiative aimed at improving menu options for children. The effort included the introduction of a Kids Meal consisting of macaroni and cheese, Apple Fries with caramel dipping sauce and low-fat milk in a combo that contains a total of 340 calories and 505 milligrams of sodium. Burger King also said more healthful Kids Meal options are in development and will debut next summer.

“We have made a strong, company-wide commitment to help improve childhood nutrition and will continue to dedicate resources to developing new Kids Meals that meet our stringent nutritional criteria while also offering the taste and value our customers expect from Burger King restaurants,” said John W. Chidsey, BK’s chairman and chief executive.

A Burger King spokeswoman added that the chain “is working on a number of things” to offer more healthful alternatives.

“There are a lot of moving parts right now, but we’ll have more to say in the coming months,” she said.

“As the evidence against high-salt diets pours in, it has become more obvious that the food industry needs to change,” she said. “The problem is that people on high-salt diets don’t like lower-salt foods, and it takes three to six weeks to get used to eating less salt. Once that happens, everything tastes salty, but the transition is tough.”

Nestle added that since members of the consumer advocacy group Center for Science in the Public Interest petitioned the Food and Drug Administration to remove the Generally Recognized As Safe, or GRAS, status from salt in 2005, food companies expect some kind of legislation restricting salt to pass “especially in the next administration, so they are trying to head off regulation.”

Au Bon Pain’s Frechette agreed that more companies are paying attention to sodium because of increased legislative and consumer group pressure being put on them. Recently, New York City Mayor Michael Bloomberg held an exploratory meeting with restaurateurs and members of the local health department to discuss lowering sodium in food served in city restaurants. In Philadelphia, a menu-labeling mandate requiring chain restaurants to disclose a host of nutritional information, including caloric content and sodium levels, passed last month.

“[The industry] is trying to stay ahead of what we see as a trend coming,” Frechette said. “Everyone is more health-conscious and recognizes that too much [salt] is a bad thing. I think it’s a sign of the times. Where the opportunity presents itself, people will reduce sodium if they can still hold on to the taste.”

Au Bon Pain, he added, has already reduced sodium by switching to all-natural chicken and incrementally cut the amount of salt in its 12-ounce portion of onion soup from 1,600 milligrams to 900 milligrams. He also noted the chain’s goal is to get its entire line of 47 different soups below 1,000 milligrams of sodium each and reduce the salt in its salad dressings.

But despite efforts to lower salt content, the CSPI conducted a study between 2005 and 2008 that found of 528 packaged and restaurant foods about 100 of them increased sodium levels by 5 percent or more, while sodium in 114 other products declined by 5 percent or more.

“Some products went up in sodium, others went down…with the average level staying the same,” said Michael Jacobson, CSPI’s executive director. “The great majority of products we examined are packaged foods, not restaurant foods, but I doubt they’d be very different.”

Jacobson credited Burger King and KFC as “being very responsible by trying to cut sodium.”

“I hope they succeed and that other companies follow their examples,” Jacobson said.