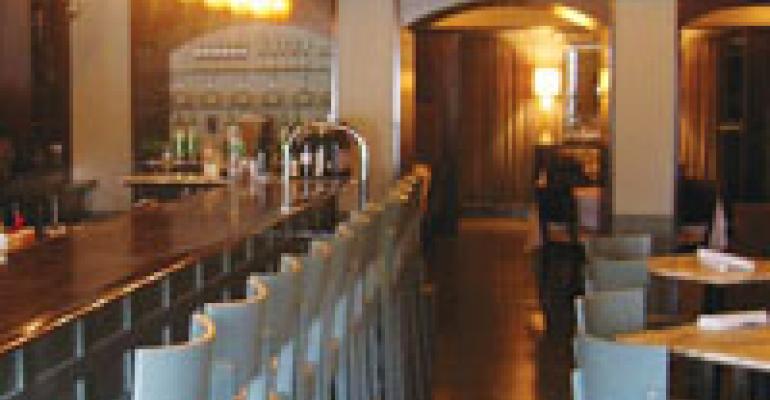 I always knew I’d own a restaurant,” Barbara Lynch recalls of her childhood growing up in the South Boston projects. “Maybe a bar or a small—what we call a sub shop. Just because I thought I’d have a job, I’d be employed.”

She sits, fidgeting on a stool at Butcher Shop, one of the three restaurants—as well as a shop and cooking school—spawned by the success of her award-winning restaurant No. 9 Park. Her aquamarine eyes flicker with amusement as she traces the trajectory that brought her from a tough working-class adolescence to the top ranks of Boston’s dining scene.

“I was actually a bookie in my math class,” she says, laughing as she recalls her high school days. “I was calling in dogs, playing the lottery.

“Oh my god, it was so fun,” she says, grinning. “But I knew that that wasn’t going to last, so I stopped all that.”

And she started cooking.

Nowadays Lynch is most definitely employed, even if her acclaimed restaurant is a far cry from a sub shop. When she opened No. 9 Park in 1998, the Boston Globe gushed that “the main courses were wonders” and the waitstaff “seemed as smooth as silk.” Alison Arnett, the reviewer, finished her three-star review by writing that the chef was “on her way to creating a Boston landmark.” Arnett was remarkably prescient.

The restaurant has appeared in “Boston Magazine’s Best of Boston” roundup each year since 2002 for its chef, pastry chef, sommelier, wine list and even its Palmyra cocktail, a blend of premium vodka, lime juice and mint simple syrup. In granting the restaurant an award of general excellence, the writers quipped, “The name really ought to be No. 10 because chef Barbara Lynch’s Beacon Hill institution offers perfection every time.”

But it isn’t just the locals who are wowed by the place. In 2003, Lynch won the James Beard Award for Best Chef Northeast. Bob Kinkead, the chef and owner of Kinkead’s in Washington, D.C., and one of the nominators for the Fine Dining Hall of Fame, cites Barbara Lynch’s “consistent standard of excellence throughout her career.” Frank Stitt, an Alabama-based chef and another nominator, calls No. 9 Park “a wonderfully well-rounded restaurant.”

The restaurant is located in Boston’s historic Beacon Hill neighborhood in a 200-year-old mansion. At dusk patrons seated near the front dining room’s bay window can look across the street to see the lights of Boston Common twinkle to life. From the bar lounge, which takes up the other bay window, you can see the gilded dome of the statehouse.

When Lynch was looking for a spot to open this, her first restaurant, she knew she wanted to be on Beacon Hill. After her realtor showed her the outside of the shoe store and card shop that then occupied 9 Park St., she knew it was the place.

“I said, ‘Perfect.’ I didn’t even look inside,” she says, “and two days later it was happening.”

Inside the restaurant is unostentatious to the point of plainness: all cool grays, tans and browns.

“I didn’t want a lot going on all over the place,” Lynch says about the absence of flowers and strong color or pattern, “so that the focus could be on the service, the food and the wine.”

She approached designers Cheryl and Jeffrey Katz, whom she had known as customers, with a limited budget but a great deal of trust.

The restaurant is divided into three distinct dining areas, each with its own personality and acoustics. Upon entering, patrons are greeted with the hubbub of the cafe and bar area, where painted wooden chairs and stools only amplify the sound bouncing off the terrazzo floor. Beyond the cafe, another quieter, more intimate space beckons.

As John Gersten, the bar manager, describes it, the front is “a really fun exciting space, and then you walk in the back and it is hushed.” Banquettes, upholstered chairs and ceiling panels all contribute to this. The third dining room, with its view of the Common, splits the difference, a little more prim than the bar but with an airy feel reminiscent of an old-fashioned tea-room.

If the decor won’t let customers forget that they’re in New England, the food sends them to sunnier climes. Lynch’s roots are in French and Italian cooking, even if the results are thoroughly American. Like the decor, though, there is no fussiness here.

“The food is of great quality,” says Paul Athanas, a Boston restaurateur. “It is wonderfully prepared, but it’s not something you need a glossary to figure out what you’re eating.”

“Simplicity through refinement” is the way Colin Lynch, no relation, No. 9 Park’s executive chef, summarizes the approach. In a dish of beef tenderloin, the focus is very clearly on the meat with the garnish of marrow, marrow croutons, a little plate of local carrots and an onion custard that never upstages the grass-fed meat sourced from a farm some 60 miles west of downtown Boston.

The restaurant tries to buy locally as much possible.

“We have a long-standing relationship with many of the farmers,” the executive chef says.

Admittedly this is easier in the summer and fall, when the farmers come into town to sell at farmers markets and thus can make deliveries at the same time. The obsession with local is only tempered in the case of seafood.

“We don’t want to limit ourselves to skate and codfish,” Colin Lynch says.

A locally sourced wine list would be a bit of a stretch, too. Rather, wine director Cat Silirie has chosen to support Lynch’s French and Italian repertoire with bottles cast almost entirely from those two countries, though Silirie has made room for a cameo from Austria. Because those wines are “unbelievably food friendly,” she says.

The food may be refined and local, but it is not staid.

“Barbara Lynch has a wonderful talent of combining food and flavors in a way that is rooted in a really great sense of aesthetics,” Stitt says.

This means that French techniques often rub up against Italian ingredients, even as Gallic ingredients sneak into pasta. Lynch has a reputation for her house-made pasta that long predates No. 9 Park. A recent menu featured a dish of prune-stuffed gnocchi with a foie gras beurre blanc with seared foie gras.

“The French don’t really like pasta, and the Italians don’t like foie gras, so we put those together,” Lynch says. “I like having fun.… I don’t take myself too seriously.”

That may be, but she takes her business very seriously, trying to spend a little of each night at each of her three restaurants, keeping an eye on both the front-and back-of-the-house. The wait-staff is just as attentive, yet unpretentious, as the owner.

“They treat you with great respect,” Athanas says. “There isn’t an elite attitude at all about it.”

Colin Lynch points to the longevity of No. 9 Park’s chefs as a tribute to Barbara Lynch’s management skills. Colin Lynch has been at the restaurant for six years. He came to the business straight out of The Culinary Institute of America and worked his way right up to the executive chef position. He shakes his head, marveling at her managerial instincts. Formal training certainly didn’t play a part in her education. Barbara Lynch came up the old-fashioned way.

Her first exposure to fancy dining came as a teenager when she helped out her mother waiting tables at the St. Botolph Club, an old-fashioned French restaurant of the Dover-sole-under-a-bell variety. She also credits the home-economics program at her high school for taking her out of the Irish-food ghetto.

In her spare time, Lynch helped a friend at a local joint called the Soda Shack, flipping burgers and making steak and cheese subs.

“There was something about it that I loved, and I took pride in it,” she says.

Her first big break came when the chef walked out on a boat that did dinner cruises off Martha’s Vineyard, and she got the job.

“All of a sudden I was running a ship…and I thought this [business] could be fun,” she says.

Soon enough she was working for Todd English and had to learn all about Mediterranean food.

But Barbara Lynch has no fear of hard work.

She got her chance to shine when she took over the reins at Galleria Italiana. Her cooking earned her several “Best of Boston” honors and a Food & Wine “Best New Chef” distinction in 1995. But she felt constricted. Perhaps it was remembering the sole à la Normande at the St. Botolph Club, or the éclairs in her Roxbury home-ec class, but she wanted to bring a little French precision and discipline to her cooking. To do that, she would need her own restaurant.

She found No. 9 Park the day she left Galleria Italiana. Even today her approach continues to meld the two cultures, the precision of the French with the passion of the Italians.

Hard work, an instinct for management and a deep streak of creativity have showered Barbara Lynch with rewards. As the Boston Globe predicted, No. 9 Park has become a Boston culinary institution. And with the Butcher Shop, she’s even got a restaurant that makes a mean meatball sub.