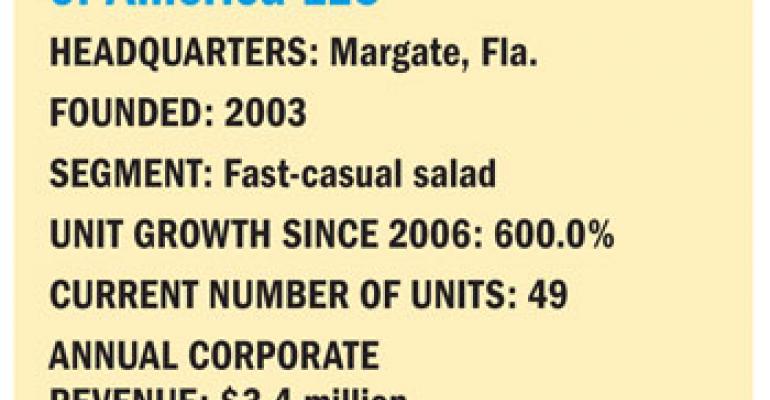 No. 2 – Salad Creations of America LLC

Salad Creations has spread rapidly since its founding seven years ago, just as consumers gained a growing appetite for healthful and customizable meals.

The concept specializes in make-your-own salads that are available in full or junior sizes. In addition, the menu features wraps, sandwiches and soups.

Founder and president Jeff Levine, who also co-founded the Brother Jimmy's BBQ concept in 1990 in New York City, told NRN in 2008 that changing consumer habits opened the door for brands like Salad Creations.

"When you see a company like McDonald’s spending millions on advertising salads, you know that lifestyles are really changing," he said. "Mine changed when I had my first kid: I started making better decisions about eating and exercising. I want to be able to run around with them."

Salad Creations continues to expand in the United States, where it has restaurants in more than 15 states, as well as in international markets, where it has locations in Canada, Brazil and Kuwait.

Make-your-own salad concepts continue to grow in popularity. Others in the segment include bigger players like Conshohocken, Pa.-based Saladworks, which has more than 100 locations, and several smaller concepts such as Fort Lauderdale, Fla.-based Tossed, New York-based Chop't and Dallas-based Snappy Salads.