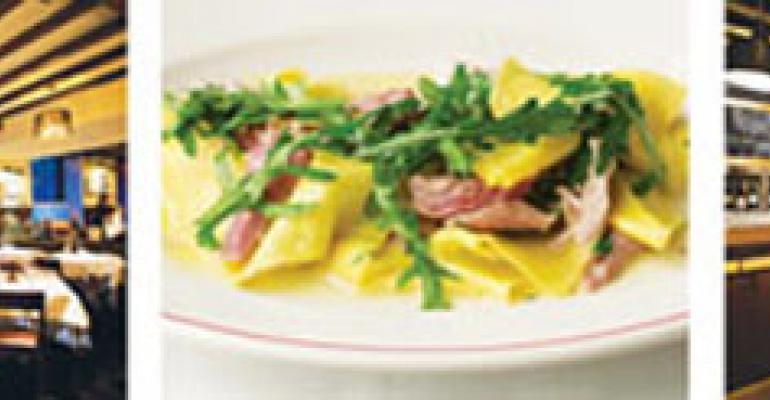 Nick Anderer might have just made his debut as an executive chef at Maialino, a Roman-style trattoria in the Gramercy Hotel in Manhattan, but his menu there has been a long time in the making.

Maialino, which opened in November 2009, is owned by Danny Meyer’s Union Square Hospitality Group. Prior to opening, Meyer and Anderer took a two-week trip to Rome to research dishes.

“I think it’s a menu that we have been developing in our heads for our entire lives,” Anderer said. “It sort of represents a shared labor of love that Danny and I have for Rome.”

Anderer was familiar with the city and its cuisine long before he took the research trip with his boss. He had been studying art history at Columbia University in the late 1990s when he decided to spend a year in Rome.

“During that year, I really got into food,” he said. “I got into walking around the city and tasting things at the various trattorias. You go to one trattoria in Rome, then you go to the next, and it is almost exactly the same menu, but nothing ever tastes the same, because each place has their own way of doing things.

“For me, it was coming up with what we thought was the best version of those dishes.”

The improvisational freedom Anderer has at Maialino allows him to improvise on what he enjoyed eating while in Italy.

Anderer said he and USHG are committed to finding suppliers nearby, but not for the buzz associated with local ingredients. Rather, he said, the quality tends to be higher.

“The word ‘local,’ I know, is thrown around a lot these days,” he said. “But we think it is even more important that things are eco-friendly—that we are working with people we know, that we trust and that are doing things in a way that is good for the product. Not just for political reasons, but because the final product is better.”

The local philosophy is important for preparing one of Maialino’s signature items: the suckling pig. The Maialino al Forno, as the dish is described on the menu, is meant for two to three guests and sells for $72. Anderer said sourcing the pigs from a farm that he knows and trusts is important to the quality of the final dish.

“We really have to do very little to make that dish great,” he said. “Just cooking it carefully, slow-roasted with crispy skin on top and moist succulent skin on the bottom. Potatoes roast alongside the pig and absorb the juices.”

Suckling pig is an important ingredient at Maialino, whose name means “piglet.” Anderer also uses it in a ragu that is served over pasta with arugula, which sells for $17.

While he tries to obtain as much of the meat and perishable ingredients from local farms and suppliers, Anderer admitted that creating Roman-inspired cuisine means sometimes having to go straight to the Boot for certain items.

“There are things from Europe and Italy, things like olive oil and vinegars, artisan-crafted products that we probably wouldn’t be able to find as readily here in the States,” Anderer said.— [email protected]