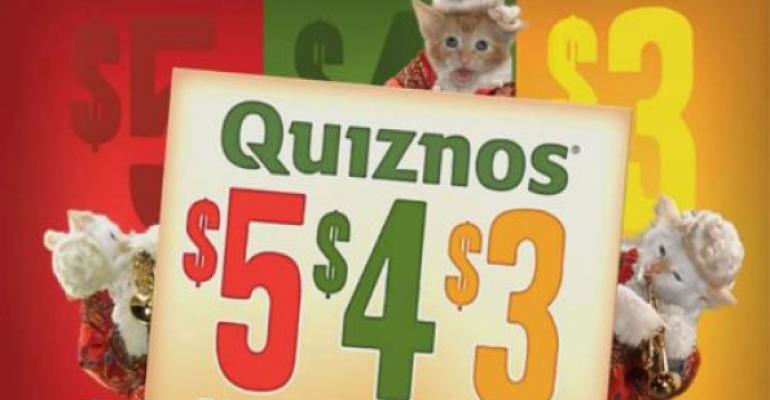 The Denver-based system of nearly 4,000 restaurants has added two new varieties to its $5 Large Deli Sub line: a three-cheese sub, with cheddar, Swiss and mozzarella, and a turkey and ham sub.

Large Deli Subs, with a price point aimed at countering rival Subway’s popular $5 Footlongs, are part of a three-tier value play that Quiznos has promoted since the first of the year that also includes the $5 Choose 2 menu, as well as the chain’s $4 Toasty Torpedoes and $3 Toasty Bullet products. Chose 2 permits customers to create a combo meal from two items on a list of soups, chopped salads and sandwiches,

Quiznos’ efforts to promote its value menu comes as it fights to regain momentum in the face of lower estimated sales per unit and the closure of hundreds of restaurants in recent years. The chain had estimated 2009 U.S. systemwide sales of about $1.57 billion from 4,003 restaurants, all but three operated by franchisees, according to the Nation’s Restaurant News Top 100. That was down from a reported $1.8 billion in domestic sales from 4,636 restaurants in 2007.

The revitalization effort by Quiznos also includes a campaign to open up to 600 company stores, loan startup money to experienced restaurant managers who want to own their own franchise, and sell more franchises to convenience store owners.

In addition to the Singimals ads that began running Monday on national and local TV and radio, Quiznos is supporting its value menu and new marketing strategy with two contests.

First up, Quiznos said, will be an instant-win contest in which entrants vie for a chance to receive five, four or three $5 Quiznos gift cards. Details about the contest will be available at www.quiznos.com.

Beginning Aug 2, Quiznos said, consumers will be invited to upload to the chain’s website their own music videos incorporating fun photos and the Singimal’s song for a chance at prizes of $5,000, $4,000 and $3,000 and the opportunity to have their creation air on national television or radio. Quiznos said its creative team will select 10 submissions for a final vote by website visitors to determine three winners, and it encouraged participants to preview their entries on the chain’s Facebook page.

“This fun, new campaign was created to reach consumers in a creative and light-hearted way, while engaging them to interact with the brand on Quiznos.com,” said Jason Robson, Quiznos' chief marketing officer. “The new ads and online components will be an entertaining way for Quiznos' customers to learn about the new $5, $4, $3 value menu offerings.”