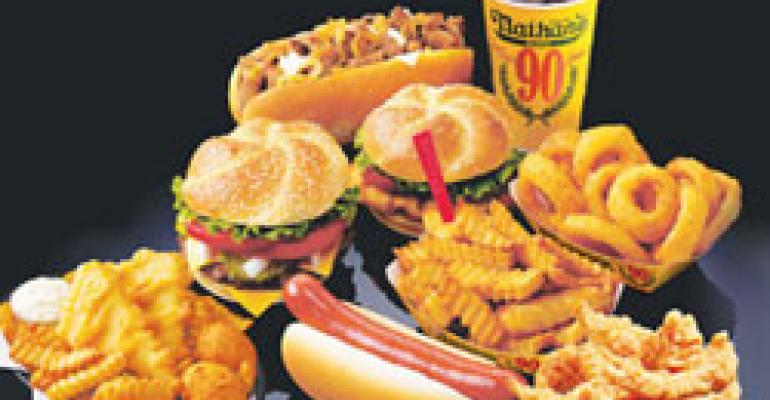 Besides the millions of wieners destined for incineration on outdoor grills across the nation, the Fourth of July is the day Nathan’s Famous hosts its annual International Hot Dog Eating Contest on Coney Island in the storied borough of Brooklyn, N.Y.

Held for nearly a century at Nathan’s original location on Surf Avenue at the entrance to Coney Island amusement park, the hot-dog eating competition began in 1916, the same year Polish immigrants Nathan Handwerker and his wife, Ida, opened Nathan’s hot dog stand. It still stands today, although in a considerably larger and fancier building.

At the Handwerkers’ urging, an Irish immigrant by the name of James Mullen ate 13 hot dogs in 12 minutes, a test of patriotism among fellow immigrant friends to see who could devour the most hot dogs and thereby prove himself to be “the most American.”

By contrast, last year’s winner, three-time champion Joey Chestnut of San Jose, Calif., gorged himself on 68 hotdogs in 10 minutes and suffered no ill effects, he claimed.

The key to his victory, Chestnut explained, is that he loved Nathan’s hot dogs long before he started competing.

“That contest has made Nathan’s an international icon,” said Wayne Norbitz, who has worked at Nathan’s his entire adult life and is now the company’s president and chief executive. In fact, Handwerker’s son, Murray, hired Norbitz in the 1970s. Norbitz also met his wife there.

Although Nathan’s menu has broadened to include hamburgers, cheese steaks, wraps and other staples of modern fast food, the core purchase is the same as it ever was: a hotdog with sauerkraut and mustard, with the option for several other toppings including cheese, hand-cut French fries — these days crinkle cut — and a Coke.

Beyond hot-dog eating aficionados, prominent world leaders and other celebrities have been devotees of Nathan’s.

The brand’s affiliation with well-known personalities began on the operation’s first day when Nathan Handwerker borrowed $300 from two obscure entertainers who worked the boardwalk at Coney Island and who would go on to be superstars of their day: Eddie Cantor and Jimmy Durante.

Six U.S. presidents also made appearances at the restaurant, most prominent of which was Franklin Delano Roosevelt, who visited the location several times and once served hot dogs to the King and Queen of England on a visit to Coney Island. He also had Nathan’s ship frankfurters to his historic Yalta conference with Winston Churchill and Joseph Stalin during World War II.

Politics, in fact, seems to have played a prominent role in Nathan’s long history. Nelson Rockefeller, the 49th governor of New York state and U.S. vice president under President Gerald Ford, once told a newspaper, “No man can hope to be elected in his state without being photographed eating a hot dog at Nathan’s Famous.”

Norbitz reports that Jacqueline Kennedy Onassis also was a faithful devotee of the brand. Mega-celebrities like Barbra Streisand and Jerry Seinfeld also are said to be fans, and the late actor Walter Matthau requested Nathan’s frankfurters be served at his funeral, or so the story goes.

While Brooklyn borough president Marty Markowitz couldn’t say how much Nathan’s heritage location contributes to the borough’s tax base, he said the location has been a boon over the decades for tourism and his personal love life.

As a teenager, adult and middle-aged bachelor, Markowitz found the patio eating area, with its view of the amusement park and the surf, a great place for courtship.

Among his dates, Markowitz said he took his wife there. “She’s a Brooklyn girl by birth, but she was living in Manhattan,” he said. “So I figured I had to bring her to Nathan’s to remind her what real Brooklyn was all about.”