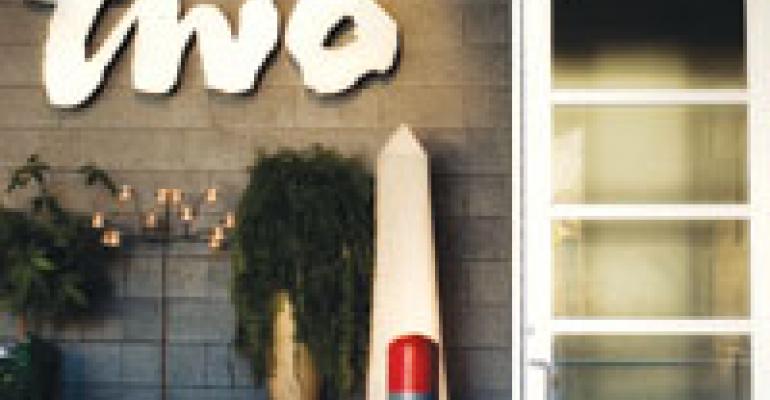 By operating portfolios with wide-ranging price points, such groups so far are withstanding belt-tightening by recession-wary consumers.

“I would expect to see continued growth from this group,” said Darren Tristano of the foodservice consulting firm Technomic Inc. of Chicago. Such smaller companies with regional focuses “have advantages in that they can roll out new items quickly and take advantage of trends as they emerge.”

However, the multiconcept operators are beefing up internal controls and their emphasis on customer service and incentive programs in bids to maintain patron frequency.

“We’re doing fine, but everybody has to be aware of uncertain times,” said Kevin Brown, chief executive of Lettuce Entertain You Enterprises, which is scheduled to open three new restaurants through the third quarter as management remains guardedly confident of the economy. “As long as you execute well, the guests will continue to go where they feel they will get the best experience.”

LEYE plans to debut L.20, a fine-dining seafood concept by noted chef Laurent Gras, this spring in the Chicago space formerly occupied by its high-end Ambria concept. A summer opening is slated for the company’s Hub 51, aimed at young adults and operated by sons of LEYE founder Richard Melman. Also planned for a summer launch is a Mon Ami Gabi bistro in Reston, Va., marking the spread of a LEYE concept with outlets in Chicago and Las Vegas.

The brand evolution that gave LEYE a multiregional reach and estimated 2007 revenues of about $340 million also appears to be occurring for other companies, including some that had retrenched after failed bicoastal expansion.

Seattle-based Restaurants Unlimited, for example, was adding a Kincaid’s branch in Milwaukee last month and readying the launch of Pizza Fondi in Gig Harbor, Wash., for May to expand the company’s fleet of 56 restaurants in 14 states. Those additions come after the company pulled back several years ago from an unsuccessful expansion to Washington, D.C.

“We were already branching out along the coasts and in the Southwest—that’s where all the growth is,” Cameron Mitchell said.

However, he closed a Cameron’s Steak House in Milwaukee and a restaurant in the Louisville, Ky., market that had underperformed.

Innovative Dining Group, which recently debuted a conveyor-belt-sushi restaurant called Luckyfish in Beverly Hills, Calif., and the Robata Bar restaurant in Santa Monica, Calif., is planning more openings in Southern California and Las Vegas, where it now has two outposts, and in Scottsdale and Hawaii, said co-owner Lee Maen. Most of Innovative’s financing comes through “angel investors,” some of whom are Hollywood celebrities, he said.

Although the shifting economy has not affected the company’s sales, Maen said, rising costs for labor and food commodities are challenging profitability. However, improved deals on real estate offer some encouragement, he added.

Other multiconcept groups, including Concentrics Restaurants and Starr Restaurants, are partnering with hotels to operate dining, room service and banquet facilities.

“The hotel part is getting stronger daily,” he said. “We can pick and choose what we do there. All of our 2009 openings will be on the management development side.”

Amick also is upbeat about the outlook for his existing restaurants, especially midscale ones with average checks in the $30 range, which are the busiest. Same-store sales are up and ahead of budget at his company’s Two Urban Licks, although volumes were a bit softer in January and February at a few other restaurants, he said.

Amick and partner Todd Rushing plan to launch the New Orleans-influenced Parish: Foods & Goods this spring in Atlanta. The restaurant will feature a retail market opening at 7 a.m.

Starr Restaurants, known for its 11 Philadelphia operations, such as Alma de Cuba, Buddakan and Striped Bass, has begun entering into joint ventures with hotels, including the W in Fort Lauderdale, Fla., and the Chelsea in Atlantic City, N.J.

Such deals are “a way to grow the company with other people’s money,” said president Stephen Starr. Among his newly planned concepts are a contemporary coffee shop, Teplitzky’s, for the boutique Chelsea property, and Parc, a French bistro, for the Parc Rittenhouse Hotel in Philadelphia.

Starr also is focusing more on catering through his new Starr Events division.

In New York, the 10-unit Union Square Hospitality Group is growing its three-year-old Hudson Yards Catering Co., focusing on events at venues like the Museum of Modern Art and the Puck Building. The company also is opening its second Shake Shack, a burger concept launched four years ago, that’s being primed for additional growth.

Blue Smoke, USHG’s barbecue concept, also is slated for duplication, partner David Swinghamer said. The soft economy has had a minimal effect on the Union Square group’s business, he said.

“If there’s any weakness, it’s in fine dining,” he said, “which we’ve felt just a little. There’s a little shift from fine dining to lower-check-average restaurants.”

Officials of the eight-unit Here to Serve Restaurant Group in Atlanta say it has seen small declines in check averages but a rise in guest counts. Director of operations David Abes said diners are cutting back on desserts and pricier wines. Still, the operator of Ola, Prime, Twist and other one-of-a-kind concepts is negotiating a deal to launch a new restaurant while promoting a frequent-guest card that brought in 10,000 new members in February. Abes said Here to Serve also has introduced miniature desserts and other novelties to spur interest.

Fellow Atlantan Amick of the Concentrics group echoed the moderately bullish sentiments of several multiconcept peers regarding the economy: “I don’t think people stop eating out, [but] they are more careful of where and how they spend their money.”