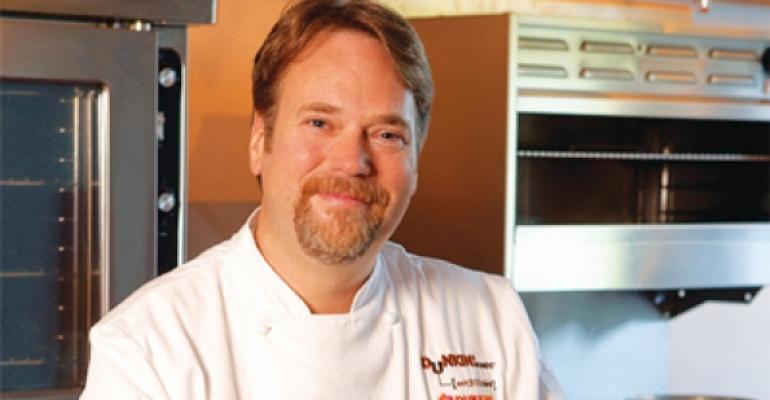 Some of the most important ingredients that make up a successful corporate research and development leader are copious amounts of creativity and serious pragmatism — two things Dunkin’ Brands’ Stan Frankenthaler has in excess, industry observers say.

“Stan is a rare individual who brings world-class culinary skills with a sense of operational simplicity,” said John Costello, Dunkin’ Brands chief global marketing and innovation officer. “He and his team are able to come up with unique products that excite guests, but that also can be implemented in all our stores.”

Frankenthaler, vice president for global product innovation and culinary at Dunkin’, and the recipient of the 2012 Nation’s Restaurant News MenuMasters Award in the Innovator category, said that whether he’s working for a white-tablecloth or quick-service restaurant, “innovation is when the good idea meets the consumer when they want it, where they want it.”

Since he joined Dunkin’ in 2005, Frankenthaler has found the intersection of a lot of good ideas and consumers’ desires, and has been credited with raising the bar on food and beverage in the quick-service industry. He has led the development of numerous menu successes, including Dunkin’ Donuts’ DDSMART menu, featuring multigrain items and egg-white omelets; limited-time offerings such as Sausage Pancake Bites and the Big N’ Toasted breakfast sandwich; and bakery items including bagel twists and heart-shaped doughnuts. His innovations for the Baskin-Robbins brand include new ice cream flavors such as Superfudge Truffle and Salted Caramel Cashew, and single-serving ice cream Cake Bites.

When Frankenthaler joined Dunkin’ Brands seven years ago, the decades-old doughnut chain had never had an executive chef. Today, he leads an R&D team of 18 that includes chefs, bakers, beverage specialists and food scientists.

“Product innovation is an important aspect of our success,” said Costello. “And Stan and his team are a very important part of that success.”

Frankenthaler continues to innovate for the chain, most recently leading the development on Dunkin’s new Artisan Bagels.

Classically trained at the Culinary Institute of America, Frankenthaler spent the early portion of his career working in independent fine-dining restaurants, including as chef-owner of the much-hailed Salamander in Cambridge, Mass. One thing that has kept him in the business for so long is the excitement he gets from doing new things.

“New things have always excited me,” he said. “Food, for me, was always about celebrating, a sense of discovery, new tastes, new stories.”

Restaurateur Jasper White, whom Frankenthaler worked under at White’s namesake restaurant in Boston during the 1980s, said: “He’s got everything a chef needs: work ethic, creativity, drive, the palate. He’s a very creative thinker. I had to put a saddle on him and ride him around to hold him back.”

Frankenthaler worked nearly every position at Jasper’s, including serving as head chef while White took time off to write a cookbook. It was during that period that the restaurant earned four out of five stars from The Boston Globe.

“We did work creatively together. I let him put stuff on the menu,” said White. “He had a real positive impact on the success of Jasper’s while he was here.”

Bertucci’s executive chef Jeff Tenner, who worked closely with Frankenthaler when both were in product development at Whole Foods in the early aughts, said: “Stan is a really unique individual. He has this incredible natural curiosity, a passion.”

Tenner recalled many creative concepts Frankenthaler came up with to promote Whole Foods’ products and prepared foods, including mixing and matching marinade and sauce products with the meat and fish departments, and setting up a live-action station to freshly candy nuts at a time before live action was de rigueur in food markets.

But Tenner said Frankenthaler’s influence is far greater than the sum of his creations.

“[Frankenthaler’s] body of work is not just about the food he’s created for various companies,” Tenner said. “As a chef at Dunkin’ Brands, his influence on brands is broader.”

In the end, Frankenthaler’s success has not come from touting his own abilities, but rather from an intense focus on others.

“If you create a menu customers desire, that’s craveable, they will come to you,” Frankenthaler said. “That, I think, is the winning recipe.”