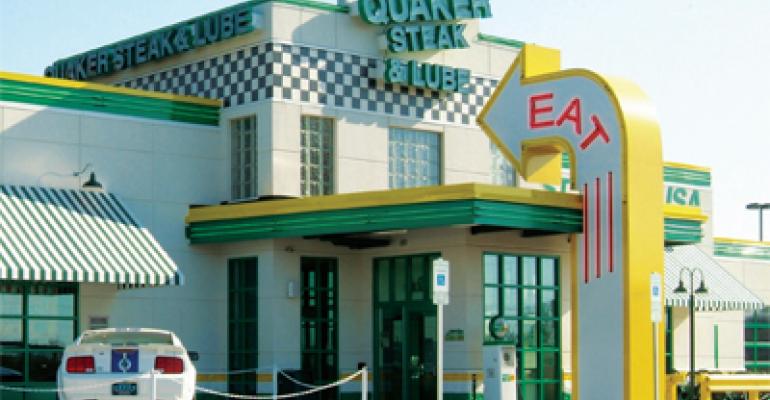 Quaker Steak & Lube is best known for its chicken wings and beer, which account for 50 percent of food sales and 75 percent of beverage sales.

But with plans to double its 47 units over the next four years, the Sharon, Pa.-based chain was looking to broaden its appeal, sell more mixed drinks and reinforce the notion that it has other, more healthful options than its wings. Shake, Wrap & Roll!, a four-month limited-time offer launched in April 2011, was The Lube’s first move in that direction, and it proved extremely successful:

• Three of the four new sandwiches and all of the three new drinks earned spots on the permanent menu.

• The new Bar Jar drinks raised the profile of the cocktail menu, a sales category The Lube wants to grow significantly.

• The LTO successfully conveyed excitement, which is a key to the motorsports-themed restaurant’s branding, and it helped raise The Lube’s profile in new and existing markets.

Katy Malaniak, The Lube’s senior director of food and beverage, and a team of operations and marketing executives, franchise partners, and consultants came up with the systemwide LTO, matching food with cocktails for the promotion.

“We received immediate feedback on the Jalapeño Chicken BLT Wrap from guests about how much they enjoyed the flavor profile,” said Marla Pieton, The Lube’s senior director of marketing. “The Bar Jars flew off the shelves. We went through 21,000 in the first six weeks, which was huge for us.”

“We far exceeded our projections and other LTOs,” added Malaniak. “We started running short of product as sales took off. It was a home run.”

The Lube scrambled to keep the Bar Jars and the thinly sliced sirloin steak served in the $8.79 BBQ O-Ring Cheesesteak stocked. The sirloin is sautéed with signature barbecue sauce and topped with 1-inch-thick crispy onion rings and Cheddar cheese in that sandwich, and served on a hoagie roll.

The sirloin is also on the $8.79 Pick- Up Pickle Philly, which includes zesty ranch wing sauce, crunchy dill pickle slices and melted Swiss cheese on a hoagie roll, with jalapeño-ranch slaw served on the side.

The BBQ O-Ring Cheesesteak quickly became The Lube’s best-selling “burger,” Malaniak said, though it’s too early to tell whether that status remains now that the promotion is over.

The jalapeño-ranch sauce was one of just three items The Lube team needed for the LTO. The other two were Bacardi Dragon Berry Rum and the Bar Jars.

“This menu is definitely yummy,” said Kathy Casey, founder of Seattle-based Kathy Casey Food Studios — Liquid Kitchen, when asked about the LTO. “They have some craveable foods in there; I like the Bar Jars and their names and how they presented everything from a marketing standpoint. It really piques your interest.”

Malaniak said the systemwide LTO took eight months from conception to rollout and was part of The Lube’s quarterly menu review. Due to the popularity of The Lube’s Boneless Chicken Wrap, introduced earlier, and the trend toward healthier eating, the menu committee wanted to add additional wraps and more healthful sandwiches.

They used The Lube’s wing sauces to create sandwiches with sweet, spicy, tangy and crunchy tastes, in keeping with the chain’s style.

A beverage partner introduced the Bar Jars and suggested The Lube put a lid on the jars and shake the cocktails while delivering them to the table to add excitement and increase awareness of the cocktail menu. Allowing patrons to take the jars home would serve as a reminder of the great experience customers had and might want to repeat.

Casey praised The Lube for offering something other than strawberry lemonade, which everyone has.

“Dragon berry just sounds good, doesn’t it?” she said. “It’s great to see them doing a limeade. Citrus flavors other than lemon or orange are becoming popular. Meyer lemon, Mandarin and Clementine are starting to trend more.”

The popularity of the Bar Jars caused the only hiccup in the promotion — the original embossed jars were held up in customs, so they needed to switch manufacturers, which meant they had to use a higher priced imprinted jar. By switching suppliers, however, they were later able to cut the price on embossed jars from $1.13 to 78 cents.

“The jars really were on a slow boat from China,” said Pieton. “But we felt strongly that we did not want to delay the promotion, so we sourced a glass that was a bit more expensive.”

The LTO was supported by a server contest and full-blown marketing campaign that included a television commercial, e-mail blasts to 130,000 addresses, a menu insert, window clings, pop-up displays, a Facebook tab and a website landing page that received 1.8 million page views.