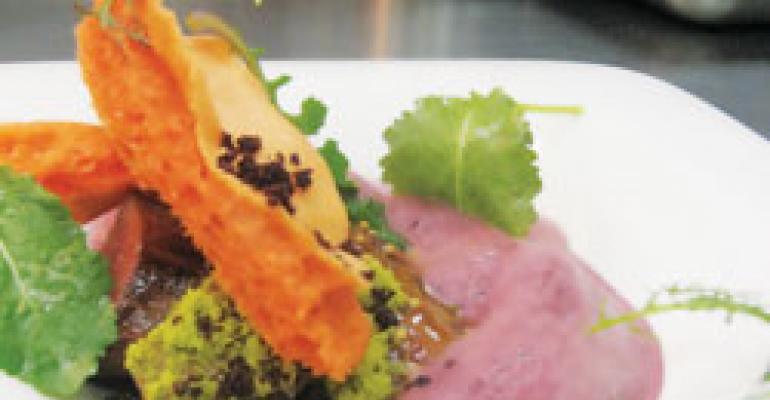 On the Menu: Town House in Chilhowie, Va.

CHILHOWIE Va. When the husband-and-wife chef team of John B. Shields and Karen Urie moved from the big-city fine-dining scene in Chicago to the mountains of Southern Virginia to take over at Town House, they took advantage of a modern medium to drum up interest in their small-town venture.

They started a blog, and that exposure is paying off, even with only about 200 hits per day, Shields says. In the year Town House has been open, they have gotten some city-dwelling foodies to make the trip, to check out what he calls "thoughtful, progressive cuisine."

"We have had people travel from Toronto, Chicago, New York and Atlanta just to come eat here," he says.

Town House offers an a la carte menu and two tasting menus. The a la carte menu has four entrees and offers a choice of desserts for diners who don't want to jump in with both feet and experience the tasting menus. The four-course tasting is priced at $48, while the eight-course menu is $85. Shields is the executive chef, and Urie oversees the sweet stuff as pastry chef.

They both worked at Charlie Trotter's in Chicago and were all set to help open a Charlie Trotter's outpost in Las Vegas when their culinary careers took a detour toward the country. They were drawn to Chilhowie, Va., by another husband-and-wife tandem, owners and town residents Tom and Kyra Bishop.

"They were pretty well-traveled" Shields says of the Bishops. "They loved to eat, they loved to dine, so they wanted to bring that back here."

Shields and Urie aim to bring their focus on local, seasonal products to the Appalachians. One of Town House's most popular dishes is the dry-aged rib eye with cauliflower, licorice, mushrooms and toasted cereals.

"I have always liked bulgur, but I haven't really used it in a lot of things," Shields says. "We decided to make a savory granola with walnuts and toss it with the bulgur."

That is combined with a mix of puffed grains, like quinoa, tapioca and amaranth. Shields uses black licorice to give the dish some pop, an element that will stand out among the grains and mushrooms.

"The licorice will kind of hit you in the back of throat, and we think it goes really, really well with the mushrooms," he says.

That dish is one of the most popular at Town House, but Shields says he has a sneaking suspicion that it is not the combination of exotic grains that has it flying out of the kitchen.

"Let's just say that if I changed the meat on it, I may not sell quite as many," Shields says. "Where we are living, beef is king. Most of the people that come in get the four-course [menu] and most of them lean towards the beef."

At the other end of the popularity spectrum is Town House's slowest-selling dish, the chestnut appetizer, which comes with purŽed quince, grapefruit and bacon ice cream. While it has some die-hard fans, the concoction has not gained the traction Shields had hoped for.

"It is kind of a hit-or-miss dish. Either people love it to death or they just don't care for it," he says. "We are not really sure if it's the ice cream that throws them off. Maybe chestnuts are not really for everybody."

Shields and his wife are committed to local, seasonal ingredients. He will bring in a whole lamb from a local source, all his eggs and dairy are local, and they have started a garden at their house, which is about a five-minute drive from the restaurant. They grow simple crops, like corn and tomatoes, with plans to expand.

They are also refurbishing another house nearby, to turn it into a bed and breakfast affiliated with Town House. That property used to be a farm, Shields says, so he hopes to grow produce there.

In addition, Shields and Urie also host a once-a-month dinner at Town House to support sustainable development in the Appalachian area, featuring local farmers and artisans.

"We just feel that there is nothing more fresh, or more flavorful, than something that has not been out of the ground for that long," he says.