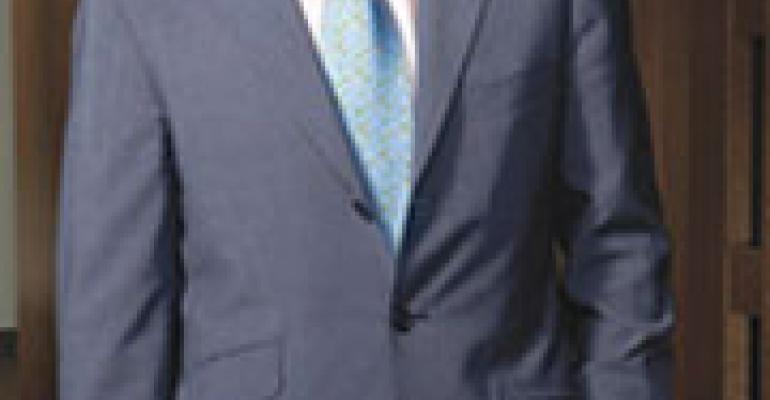 On the Menu: Restaurant Guy Savoy

The best-selling appetizer at Restaurant Guy Savoy in Las Vegas is a $68 artichoke and black truffle soup. And that’s not the most expensive starter. Hamachi carpaccio, with golden osetra caviar, cauliflower and lemon sabayon sells for $85.

But general manager Franck Savoy says 70 percent of his diners order the soup. He sells 55 orders of it nightly at the 85-seat restaurant designed as a clone of the Michelin three-star restaurant that was built in Paris by his father, Guy Savoy.

“We copy only the best,” says the 29-year-old Savoy, adding Caesars Palace’ executives “wanted the same restaurant that is in Paris.”

Savoy says they spent two years leading up to the May 2006 opening as they searched for farmers and other suppliers to meet quality standards. Not everything is sourced domestically, however. He says the fish is shipped overnight from France as are the truffles.

But the veal, beef and chicken are raised in the United States. “You have beautiful beef,” he says. And baby chicken “is better in the U.S.” These proteins from Four Story Farm in Pennsylvania, however, are not exported to the Paris outlet.

“There was a rumor” when the restaurant opened that dining was stuffy and slow, Savoy says. So he developed a quick TGV menu named for France’s high-speed train and geared to those who “want to get back to gambling.” Now the TGV Fast Menu accounts for 30 percent of sales, Savoy reports. The longer 10-course Menu Prestige is ordered by 40 percent, and the remaining 30 percent order à la carte.

In an effort to move beyond the traditional style of French dining, young Savoy conceived a “bites and bubbles” lounge where nine Champagnes are sold by the glass. The lounge also features a more “casual tapas-style menu,” which offers two items for $25, three for $35 and four for $45.

“There are people who are afraid to come into the dining room because they are afraid it is French and stuffy,” Savoy says. The idea, however, is to introduce reluctant diners and entice them to come back for the full experience.

Savoy tested a low-calorie menu but it was not popular. Located next to the spa, he tried such spa-cuisine-inspired dishes as steamed cod with vegetables “of the moment.” They flopped.

The restaurant’s signature steamed turbot chop is presented on the bone to diners, and then carried back to the kitchen where it is filleted. It is served with an earth-sea juice that is so-named “because the juice of the fish mixes with the juice of the mushrooms.”

“It is like a bone-in rib-eye,” Savoy says. “But it is from the fish. The bone is where all the flavor is.”

Also highly popular with guests is the complimentary bread cart, from which 20 bread variations are served and some are even matched with dishes. For instance, a new chestnut flan with porcini mushrooms and celery will be served with chestnut bread prepared with chestnut flour.

Savoy also serves oysters on the half-shell with crème fraîche, ice gelée, and a recommended seaweed bread based on a ciabatta-style dough that incorporates Japanese seaweed powder.

The restaurant’s signature dessert is a grapefruit terrine with Earl Grey tea sauce. Created by Savoy’s father, it is served from the dessert cart cold.