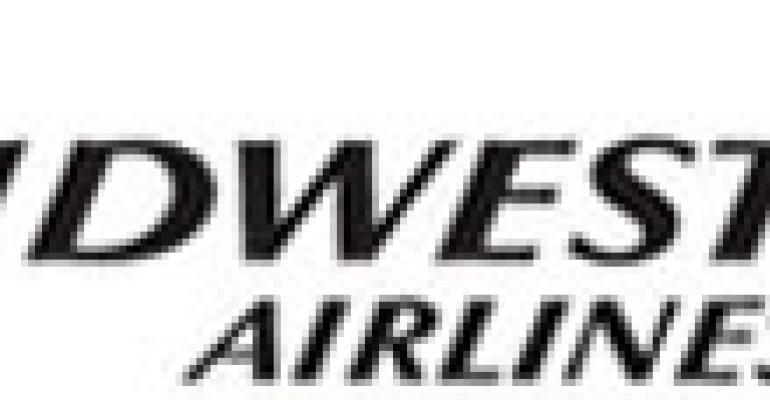 Airplane food generally gets a bad rap, historically for being bad and more recently for being nonexistent. To combat the lingering reputation, some airlines are courting celebrity chefs to help revamp their foodservice.

Midwest Airlines, however, decided to seek help a little closer to home.

The company teamed up with Mader’s, a landmark restaurant in the airline’s hub city of Milwaukee. Shawn Monroe, who has been executive chef at Mader’s since 2002, also serves as Midwest’s executive chef.

Midwest was long known for serving freshly baked chocolate chip cookies at 30,000 feet and offering its meals on proper china using actual cutlery. The cookies remain a staple, but in the tight security that followed 9/11, the fine-dining trappings had to go.

To maintain the airline’s distinct culinary image after the changes, its management began to work on ways to improve the food enough that the china wouldn’t be missed.

“Today’s [economic] model requires a buy-on-board, but it doesn’t have to be a meal that [makes] customers cringe when they spend their money,” says Bob Schuerman, Midwest’s general manager for in-flight products.

Midwest Airlines’ Best Care Cuisine program was rolled out by Monroe in May of 2005.

“It’s been excellent,” Schuerman says, noting that the foodservice program is now a profit center for the airline and that customers are rating the food as excellent.

He says food cost and anticipated markup were stipulated in the contract between Midwest Airlines and Mader’s. Breakfast items cost either $5.50 or $7.50, lunch and dinner items are $5.50 or $10. Payment is by credit card only.

The restaurant won the contract to rework the airline’s menu in February of 2005, leaving just two months to roll it out.

“We invited every flight attendant into the restaurant, so they could taste the food, and also so they would buy into it,” Monroe says.

Then the restaurant leaders hired the chefs who would actually make the food—45 in a Milwaukee commissary and another 14 in Kansas City, Mo.—and trained them in the restaurant.

“We had probably three weeks to buy the equipment for the commissary, set it up and figure out the logistics,” Monroe says.

That included getting chefs who were accustomed to cooking for 200 people a night to prepare meals for 3,000.

“It’s just basically learning how to grow into these huge pants,” the executive chef says.

Sandwiches Served with a soup or side salad

Grilled pesto chicken salad in a pita with tomato and lettuce, served with sun-dried tomato mayonnaise $10

Sautéed chicken breast simmered in a sauce of shiitake mushrooms, ginger, garlic and sherry with a touch of cream, served with herb Parmesan orzo and julienne vegetables $10

His crew is responsible for par-cooking the food, portioning it and placing it in trays. Then it is handed over to Schuerman’s team, which is about twice the size of Monroe’s, for distribution and reheating on board.

Monroe, who has previous experience doing high-volume foodservice at the Buffalo Bills’ stadium in Buffalo, N.Y., says serving food in the air brings unique challenges, not least of which is the fact that the ability to taste is diminished by between 20 percent and 30 percent at high altitudes.

Still, offerings have included Cubano sandwiches served with a side of tortilla soup with roasted-corn posole. A recent breakfast item was poached eggs on toast points with black pepper-cured bacon and Florentine sauce.

For the eggs, Monroe says his crew underpoaches them and shocks them in ice water. That way the yolks will still be runny after they are reheated on the plane.

Originally, Midwest wanted to change the menu every 30 days.

“But the complexity of going from 3,000 items of one type one day to another type the next day is so difficult that it is a major time endeavor,” Schuerman says, “and one that chef Shawn likes to implement personally,” so the menu changes every 60 days.

Monroe says that between 10 percent and 50 percent of passengers order food, depending on the length of the flight, with few people ordering during flights much less than 90 minutes. About 10 percent to 12 percent order on two-hour flights, he says.