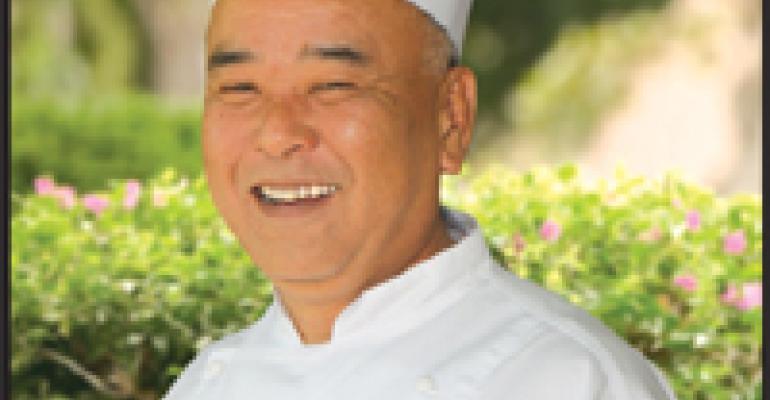 Many first-time guests at the Kamuela Provision Company, an oceanside fine-dining restaurant on the Big Island of Hawaii in the sprawling Hilton Waikoloa Village resort, don’t expect the food to compare to the spectacular sunset view from their al fresco tables. But, if the large number of repeat visitors is any indication, the restaurant’s regional cuisine can certainly hold its own.

Wilhelm Pirngruber, the concept’s food and beverage director and former executive chef, pays homage to the Hawaiian regional cuisine movement that was in its infancy when the resort opened the restaurant in 1988. He and his chefs have continued to bring fresh regional ingredients to their kitchens over the years, minimizing the importation of ingredients from long distances, a practice that once was common on the island.

“We always look at the food trends. As soon as something local becomes sustainable, we put it on the menu, whether it’s produce, farm-raised wild mushrooms, tropical fruits or farm-raised fish,” Pirngruber says.

Despite competition from other high-end resort restaurants and freestanding operations, Kamuela Provision Company has continued to thrive.

“We are usually at capacity every night with one-and-a-half turns,” he says, explaining that a staggered seating system maintains sanity in the kitchen and properly timed courses.

The 60 outdoor seats typically fill first, since the 110 indoor seats lack full ocean views. The weather cooperates almost every night of the year to make dining amid Pacific breezes and lit torches a pleasurable experience.

Most of the regular menu can be served year-round, except for some of the wild-caught fish and certain fruits. Hawaiian fish availability depends on the weather.

“If it’s bad weather, the fishermen don’t go out,” Pirngruber says. He also expressed concern that increased exports of some popular fish, such as blue-fin tuna to Japan, are depleting the supply.

Some variety of Hawaiian snapper usually is available, so the restaurant is able to serve its most popular seafood entrée, macadamia nut-coated baked snapper, each night. The fish is brushed with mango chutney and served with a coffee liqueur cream sauce.

While a nightly luau is held elsewhere on the resort property, some of the kalua pork that is pit-roasted all day finds its way to Kamuela Provision Company’s tables. Two appetizer preparations are kalua pork spring rolls and a broth-based dish with clams, kalua pork, sweet Chinese sausage, white wine and cabbage.

Such dishes reflect the melting pot of cultures that have influenced Hawaiian cuisine. Immigrants from China, Japan, Korea, the Philippines, the Portuguese Azores, Puerto Rico, Europe and mainland United States all have made a mark on Hawaii’s cuisine. Ethnic influences are evident in dishes like satay with wasabi-flavored potato salad, roasted poblano crab relleno and all-American steaks.

“Originally, this was a steak and seafood house. We still have a lot of people who order steaks,” Pirngruber says.

European-style desserts incorporate local ingredients, including Molokai limes and other island fruits, Kona coffee ice cream and, of course, coconut, pineapple and macadamia nuts. The signature dessert is a trio of sweets with a miniature sugar bottle, stuffed with a message on a tiny scroll. Guests often order customized messages for special occasions.

The Hilton is in the process of upgrading all the resort’s restaurants, and Kamuela Provision Company is set to improve its seating options. “We will put in a show kitchen and a chef’s table. Our goal is to have partial ocean views from every seat inside and to extend the bar,” Pirngruber says.