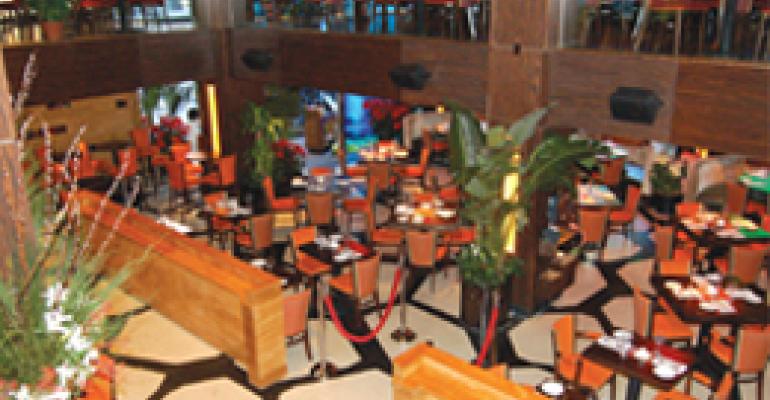 It was no surprise to anyone in New York that the out-of-the-gate buzz on Hawaiian Tropic Zone zeroed in on the waitresses’ uniforms: itsy bitsy bikinis and vibrantly colored sarongs designed by Nicole Miller that leave the Hooters girls’ outfits looking prim by comparison.

To be sure, Dennis Riese, co-owner of the Times Square restaurant and chief executive of the multiunit Riese Organization, acknowledges that Hawaiian Tropic Zone’s assemblage of well-tanned waitresses form an integral part of the 10-month-old operation’s appeal. After all, Riese acquired the food-and-beverage license rights from Hawaiian Tropic—the international purveyor of sun care products—and the bikini-clad servers even compete in nightly beauty pageants that are broadcast in real time on the restaurant’s website and across a wall of giant TV screens over the bar.

To ensure that the 300-seat restaurant’s fare is not elbowed into the shade, Riese entrusted menu development and kitchen oversight to innovative New York chef David Burke. Brought in as a consultant but then given a small equity stake in the operation, Burke had the challenge of creating a menu that appealed not only to New Yorkers but to Times Square tourists as well.

His solution was to devise an assortment of eclectic and comfort food selections that he says tend to be more straightforward than the fare currently offered at davidburke & donatella, the popular East Side restaurant he co-owns and operates with Donatella Arpaia.

“We serve only high-quality ingredients, but the Hawaiian Tropic Zone menu is more of continental style,” he says.

While there are a number of more contemporary fusion-style dishes like the Three Cheese & Pear Beggar’s Purse or Crackling Asian Spiced Pork Shank, Burke also offers a number of lunch items that might appeal to a broader range of diners. For example, he offers an “HTZ” burger with French fries and a pickle for $15, and a dish titled “The Huge Meatloaf,” which is served with whipped potatoes, roasted garlic, wild mushrooms and bacon for $18.

Caesar salad is available with several accompaniments—crunchy calamari, grilled chicken or grilled shrimp—for $17 to $19, while a black-pepper-seared tuna sandwich is priced at $15 and steak frites runs at $22.

The dinner menu forgoes most of the comfort food to target a somewhat more upscale market, with entrées that include a filet mignon for $36, an 18-ounce, bone-in, dryaged New York strip steak for $42, mushroom-stuffed bronzini for $29, and wasabi-crusted sea scallops for $27.

The average dinner tab runs about $65, Riese says, adding that they originally had projected it would run $50.

“People appear to be buying more wine than we initially thought,” he says.

However, a less-expensive option—a two-course, fixed-price menu for $28 per person—also is available between 5 p.m. and 7 p.m. every evening.

But despite the restaurant’s tropical motif and reference to the 50th state in its name, the restaurant’s menu pretty much steers clear of Hawaiian food, Burke says. His one accommodation to the island fare, however, is a pupu platter for $41, a giant appetizer designed to be shared with the entire table. It includes hibachi sticks, chicken wings, baby Kobe hot dogs, chorizo, vegetables, shrimp and pineapple with a couple of dipping sauces.

As a nod to Hawaii’s well-documented fondness for Spam, Burke says he toyed with the idea of offering a Spam and egg dish, but “it was vetoed by Dennis.” Nevertheless, he still thinks offering a Spam-crusted salmon at lunch could be a fun idea.

Anyone already familiar with Burke’s cooking will immediately recognize two of his signatures: a pastrami salmon appetizer for $14 and cheesecake lollipops for $16. The lollipops currently are the restaurant’s best-selling dessert.

While Riese, Burke, executive chef Joel Reiss and pastry chef Stuart Marx continue to refine the New York Hawaiian Tropic Zone, the company is getting ready to open a second location in Las Vegas. Scheduled for a soft opening later this year and a grand opening in early January 2008, the Las Vegas Hawaiian Tropic Zone will encompass about 15,000 square feet of space in The Shops in the Desert Passage at the Aladdin. The space previously was occupied by Commander’s Palace. Co-owner Adam Hock also is one of the partners in Pure, a Las Vegas nightclub.

In addition to the New York and Las Vegas locations, Riese says he is scouting somewhat smaller sites for future Hawaiian Tropic Zone locations. Specifically, the company is evaluating locations in Cancun.