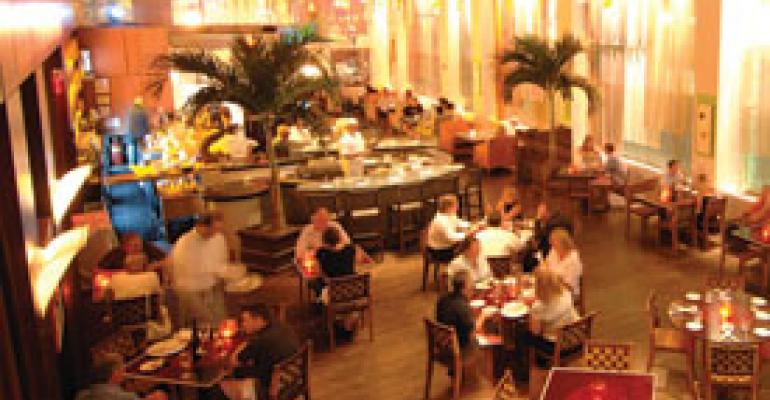 On the Menu: Great Bay

During the twilight of summer days this year, Great Bay restaurant in Boston is taking a page from the quickservice leaders and offering a value menu of its own. The seafood establishment will offer a $1 menu at its “island bar” during weekdays between 5 p.m. and 6 p.m, but instead of offering bacon cheeseburgers or five-piece chicken nuggets, Great Bay will be serving oysters, salmon and calamari.

The promotion, set to coincide with the Major League Baseball playoffs, is geared to lure patrons into the restaurant during game times. Located directly around the corner from Fenway Park at the Hotel Commonwealth in Kenmore Square, Great Bay has always attracted an eclectic array of guests, including college students, out-of-towners and baseball fans.

“During the game, people avoid this area like the plague,” Myers says. “You want to do whatever you can to put some sparkle in [the area].”

With the Red Sox playoff berth clinched, Myers sees this as the ideal time for the $1 menu.

Under the eye of executive chef Adam Fuller, the limited-time menu will feature single servings of chilled Duxbury oysters with chive mignonette and lemon; lobster and shrimp dumplings with ginger, scallion and garlic; and salmon sashimi with shiso sauce and a cone of calamari served with spicy aïoli. One of the more popular items is a spicy fish taco served with tropical fruit, avocado and cilantro. Normally served with halibut, this limited-time item may include tuna belly or other available fish as its primary ingredient.

Myers says Great Bay has always run limited-time promotions to advertise the restaurant. With only a one-hour window for this menu, Myers is hoping that the promotion will also entice customers to return nine innings later.

“[Hopefully,] they’ll remember the place in the back of their minds and come in after the game,” he says.

Food costs have become an issue when promoting high-quality products at a low price. For example, the Duxbury oysters on this $1 promotion are usually priced at $2.50 a piece. Great Bay views the possible loss as a wise future investment, Myers says.

“I would say that the flexibility of food costs as related to something like this is something that we would account for in our marketing budget,” he says. “These items would typically cost out at 100 percent more than what we’re charging for them. This is about a tickle to get people to come in.”

Positioned between the lounge and dining area, the island is an extension of the restaurant’s full-service bar. In addition to the $1 promotion menu, patrons also can dine on some of the bar’s more popular items, including scallop and lobster ceviche with Champagne grapes and fresh mint as well as bluefin tuna tartare with cucumber, ginger and sesame, both priced at $18. Guests also can choose from an array of salads, including seaweed salad with sesame and shiitake for $9, and spicy beef salad with grilled onions, chiles, soy and lime for $12.

Great Bay Restaurant also features a full-service bar with such cocktails as a Great Bay mojito for $10, and a cucumber cosmo or the Ghost of Mary, featuring spicy tomato water and lemon vodka, for $12.