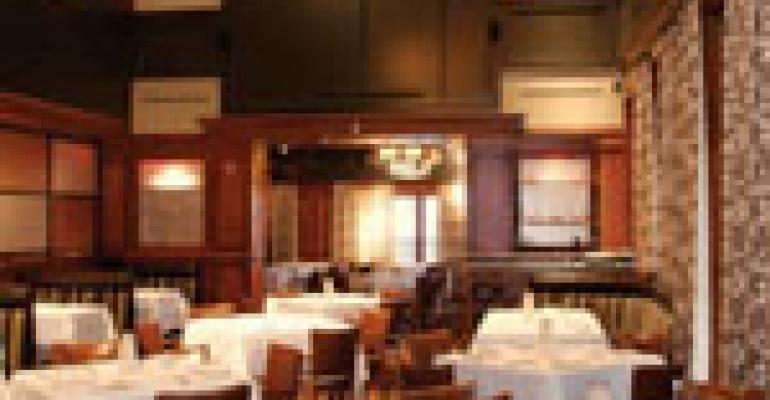 ON THE MENU: Dante

Cleveland-area native Dante Boccuzzi recently returned home after years working in San Francisco, Milan and New York to open a restaurant in Valley View, Ohio, a 20-minute drive from the town where he grew up.

“I have family here,” Boccuzzi explains. Besides, he adds, it’s an easier restaurant market than New York, where he spent the past five years as executive chef at Charlie Palmer flagship Aureole.

Before that he opened Nobu in Milan, Italy, and before that he was the executive chef at Silks at the Mandarin Oriental Hotel in San Francisco.

“I was looking for something a little more family [oriented],” says the 36-year-old chef, who had grown tired of the long commute from Long Island to Manhattan.

Now he drives to work in 10 minutes from a home that is more than double the size of his New York house.

“Everyone’s comfortable, and being my own boss I’m able to spend more time at home, which is definitely important,” he says.

To adjust to the tastes of his hometown, he started out by operating Lockkeepers, the restaurant that used to occupy the space of his current restaurant.

“I met as many people as I could and got used to what they enjoyed and then rehashed it according to my ideas.”

The results have been positive press and a regular spot on a local morning television show.

“We’ve had a great reception,” he says.

One thing he noticed is that side dishes are important to Clevelanders.

“Most of the restaurants in town are steakhouses,” he says, “so I wanted to avoid the whole concept of sides, but people were asking for them.”

So he added a “sideways” section to the menu with polenta, Brussels sprouts, onion rings dipped in batter made from local beer, vegetable lasagna, steamed vegetables and two types of potatoes, each for $6.

Boccuzzi decided to preserve the rabbit in duck fat because he didn’t expect it to be a huge seller, but they do, in fact, sell four or five orders of it per night out of about 160 daily covers.

“Confit is a way of preserving something,” Boccuzzi notes, “so, no rush.”

The restaurants slowest seller is American caviar, which can be ordered either traditionally or “in a cloud,” which is like a parfait with all the traditional caviar accoutrements, all topped with a light potato foam—a thin mashed potato with butter, cream and egg yolk squirted out of a nitrous oxide canister.

“It kind of looks like a baked Alaska,” Boccuzzi explains. He doesn’t refer to the potato as a foam, however.

Although caviar is not a big seller, Boccuzzi says he will keep it on the menu as not many area restaurants offer it.

One of the first things the chef started working on when he arrived in the Cleveland area was curing his own cold cuts, including a prosciutto named for a shopping mall in his hometown. Parmatown Prosciutto is marked with the restaurant’s logo and takes about eight months to make. It’s popular among his guests, and so is his lamb prosciutto.

“It has a gamy taste to it,” Boccuzzi says, but it’s not harsh because it’s mellowed out with a lot of the spices and herbs.”

Boccuzzi himself is a blues guitarist, and the restaurant’s graphics and decor reflect that. The logo is a guitar pick, breadbaskets are made out of melted 33 LPs, and most of the sushi plates are made out of old records lined with bamboo leaves or tempura paper.

Boccuzzi also is starting a Thursday night special called Sushi Blues: From 5 to 9 p.m. a two-piece guitar blues band will entertain guests while a special sushi menu is offered.

“I’ll sit in at some point,” Boccuzzi says. “I’ve been practicing. But I’ll mostly concentrate on making sushi.”