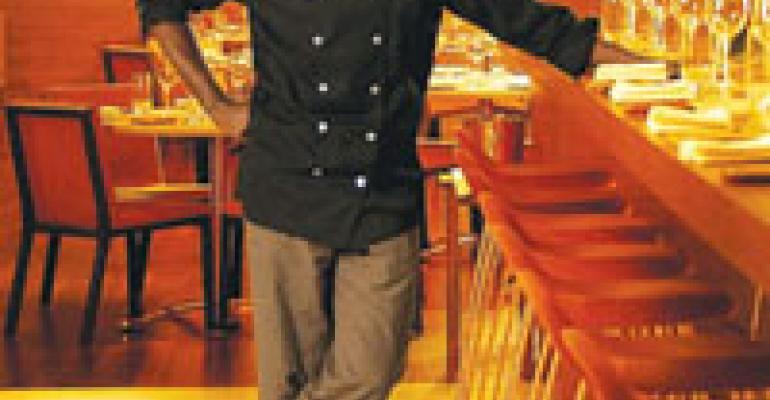 On The Menu: C-House and C-Bar

C-House, the recently opened American seafood restaurant and chop house in Chicago’s boutique Affinia Hotel, is understated, much like the personas of its chefs.

Unlike most restaurants with celebrity chefs at the helm, C-House does not broadcast its affiliation with award-winning New York chef Marcus Samuelsson of Aquavit fame, who is busily expanding that brand around the world. His name is not even on the menu, which is especially understated in the brief descriptions of its dishes.

Servers “taste every day,” he says. “There is a lot of interaction between the front- and back-of-the-house.”

Siegel-Gardner and Samuelsson talk on the phone frequently, from wherever Samuelsson happens to be at the time. He is infrequently at C-House but is intimately involved in menu creation, says Siegel-Gardner, who worked with him at Aquavit. His résumé also includes experience working with chef and television personality Gordon Ramsay.

Samuelsson says he’d long thought about opening a restaurant in Chicago because he has cooked there at various events and knows quite a few local chefs. He adds that he is impressed with how Chicago has developed into a topnotch restaurant city in recent years.

“Chicago diners are very sophisticated,” Samuelsson says. “In the last seven or eight years Chicago restaurants have become what they are supposed to be.”

Instead of opening a clone of Aquavit, he chose to do a more American-style seafood house with the addition of a chophouse, which he says would be a perfect fit for the city.

An abundance of regional specialty farmers supply much of C-House’s produce. For seafood, however, the restaurant sticks primarily with Samuelsson’s usual purveyors from the East and West coasts. Golden trout is one of the few freshwater fish on the menu.

This fall, C-House has increased the percentage of farmed fish it is serving because of seasonal shortages of wild-caught species.

“The whole idea of using seafood is to be able to be flexible with the menu,” Samuelsson says.

Some dishes are menu staples and are not expected to change seasonally, such as fish and chips, made with always-available cod. The dish is served with house-made ketchup, fries and tartar sauce with toasted coconut and anchovies.

The remainder of the printed menu consists of a half-dozen small plates and a half-dozen large plates. New small plates for fall include foie gras terrine with roasted golden trout fillet with an almond cracker, pickled beets, beet vinaigrette and caramelized endive as well as scallops with Brussels sprouts, orange vinaigrette, horseradish, radish and brown butter.

Large plates might be seared tuna with black-olive couscous and sea urchin foam or shoulder and rack cuts of a suckling pig that has been braised for 24 hours. The pork is accompanied by peach chutney and watercress.

Since everything is à la carte, the comfort-food-with-a-twist side dishes, all priced at $6, have their own listing. They range from chorizo macaroni and cheddar goat cheese to Brussels sprouts with spicy pumpkin seeds.

Toni Roberts, executive pastry chef, presides over the ever-changing dessert menu that incorporates seasonal ingredients, such as apples, Concord grapes, pumpkin and a variety of nuts. She also makes a wide assortment of candies, which sell for $2 each and are displayed in glass jars at the Candy Bar.

Daily specials are written on a chalkboard above the Candy Bar, although most diners learn about the specials from their servers.

The subdued decor in the long, narrow dining room reflects a color palette of browns and tans and includes shiny oversized, round copper pendulum light fixtures. Large sepia-toned nautical photographs are balanced on plate rails around the room.

A rooftop bar, C-View, offers city skyline views from the 29th floor and lounge-style furniture. The open-air space will most likely have to close in the dead of winter, unless a roof of some kind is installed.

At this point, Samuelsson says he has no plans to open duplicates of C-House in other cities, but he has not ruled it out.