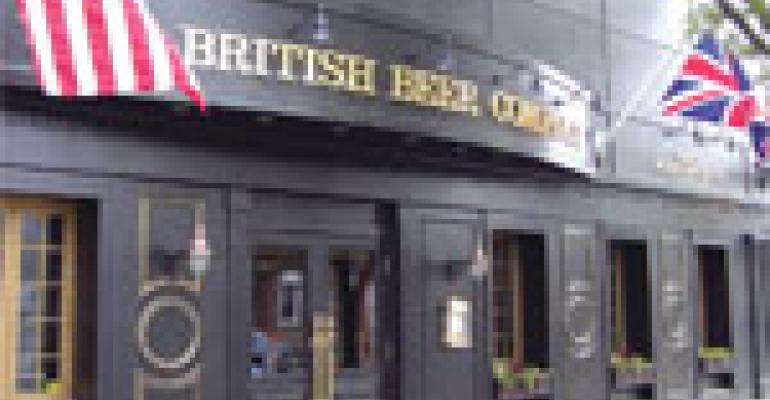 On the Menu: British Beer Co.

Most Yanks residing on this side of the Atlantic read about British pub life or see it portrayed in films or TV, but relatively few have experienced the cultural phenomenon at close range.

The British Beer Co., a seven-unit chain based in Plymouth, Mass., is hoping to change that. Owned by Gary Simon, Michael Fallman, Doug Freeman and Harry Gnong, the company has been initiating residents of Greater Boston into the convivial customs of the English public house for a decade.

The BBC—not to be confused with the London-based media giant—merchandises nearly three dozen beers from the United Kingdom as well as a large and diverse menu that showcases a selection of English culinary staples like fish and chips, pasties, and shepherd’s pie.

The owners are so serious about getting the experience right stateside that they recently flew managers across the pond to Blighty, where they were able get a real taste of genuine British pub life. Over there, the Americans also were trained and certified to handle and serve cask ale and keg beer in the British manner.

But while the BBC is earnest about recreating the traditional pub feel in its outlets, its multipage menu has been designed to appeal to American palates. The menu features an extensive and ethnically diverse range of favorites, including pizza, quesadillas, chicken wings, fettuccine Alfredo, salads, sandwiches and burgers.

Pizzas, in fact, are available in 10-inch and 18-inch sizes and in a variety of types, including Caribbean jerk pizza, pulled pork pizza, and the “Over 21” pizza, which includes steak, bourbon sauce, peppers, onions, mushrooms and Cheddar. A server sprays a mist of bourbon over the pizza tableside. The “Over 21” is illustrated on the menu by a fake driver’s license with a photo of Winston Churchill.

Nevertheless, the BBC also provides traditional British fare. For example, executive chef Tim White devised a shepherd’s pie that substitutes ground beef for the more classic lamb, flavors it with a stout gravy, carrots and peas, and tops it with Cheddar mashed potatoes. The dish then is browned.

Another English favorite served at the BBC is the pasty. Initially White offered a traditional Cornish pasty, cooked beef and vegetables encased in two 6-inch pieces of pie crust dough and baked. It didn’t sell particularly well, he says.

The pasties rank in the top 25 percent of the product mix, he says, adding, “As a group, they are our No. 1 seller.”

In the future, he plans to add a Reuben pasty with corned beef, Russian dressing and Swiss cheese.

BBC also features another British favorite called Bangers and Mash. Bangers—sausages made with pork and potato—are grilled and served over mashed potatoes and topped with stout gravy and fried leeks.

Not all Americans warm to British cuisine, and not every dish has succeeded at the BBC. White tried a variation on Bubbles and Squeak, a traditional English dish made with leftover vegetables—chiefly cabbage and potatoes—from a roast dinner.

“We had Brits come in who enjoyed it,” White says, “but Americans weren’t interested.”

The chain had considerably better luck, though, with fish and chips. The BBC offers a 12-ounce piece of haddock battered in a mixture of cornmeal, flour and beer, and served with French fries, beer-battered onion rings, cole slaw and tartar sauce.

The BBC’s British pub roots notwithstanding, White says he expects to add more Pacific Rim flavors, in particular some Thai influences, to the menu in the future.

Baked Brie Brie cheese wrapped in puff pastry, baked until golden and served over a bed of apple mango chutney with slices of multigrain bread and fresh sliced apples—8.99

BBC Fajita Your choice of marinated steak or chicken topped with sizzling onions and peppers. Served with salsa, guacamole, sour cream, cheese and a warm tortilla with chicken—12.99, steak—13.99

Bangers & Mash Fresh grilled pork and potato sausages served over mashed potatoes and toped with gravy and a chiffonade of fried leeks. Served with baked beans—12.99

Shepherd’s Pie Ground beef layered with peas and carrots, then toped with mashed potato and our stout gravy—12.99