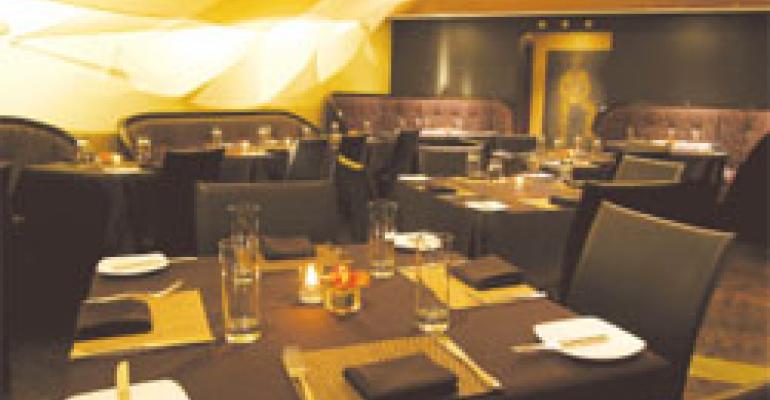 On the Menu: Boka

It’s not easy for a restaurant to get noticed on Chicago’s Halsted Street on the Near North Side, considering the competition. But Boka, a four-year-old “progressive American” white-tablecloth restaurant, seems to have found its niche.

Located next door to Alinea, which some restaurant critics have labeled the nation’s best interpretation of the molecular gastronomy that originated in Spain, and a couple of blocks from the long-acclaimed Charlie Trotter’s, Boka has some pretty high-profile neighbors. The nearby Steppenwolf Theatre also attracts the metro area’s arts patrons to the neighborhood, and many of them seek out before-and-after-theater repasts.

Positioned to appeal to everyone from theatergoers to neighborhood residents out for an ordinary weeknight dinner, Boka has refined a mix of dining styles suited to occasions of any length, including those with time limitations.

The frequently changing menu contains a good number of appetizers, geared toward diners in a hurry, as well as to those who have three hours to devote to experiencing chef Giuseppe Tentori’s deluxe tasting meal. Tentori, who spent nine years in neighbor Trotter’s kitchen, most recently as chef de cuisine, especially enjoys selecting a series of appetizers for each table to share.

These dishes range from oysters of the day with a variety of accompaniments, to first courses such as grilled baby octopus or chamomile-dusted quail, to a salad made with Peruvian tabbouleh, English cucumbers, haricots verts, Greek feta cheese and radishes.

Tentori said he decided to leave Trotter’s because he wanted to do something on his own. While contemplating a move to San Francisco, the Italian-born chef met Kevin Boehm, Boka’s co-owner, through a mutual friend. Boehm and partner Rob Katz persuaded Tentori to head their kitchen.

“Progressive American cuisine is still very much the direction of our menu,” Boehm explains. “Chef Tentori stays in this spirit but brings a light contemporary touch.”

International influence is evident throughout the menu, and many dishes include influences from more than one region. For instance, there’s New Zealand venison loin, accompanied by Israeli couscous, baby squash and cardamom mole. Another entrée, Australian barramundi, is served with chanterelle mushrooms, artichoke purée, Chinese long beans and bell pepper jus.

Pastry chef Elizabeth Dahl, another Charlie Trotter’s alum, also works with the seasons, incorporating locally grown fruits and even some vegetables into her creations. A current favorite is a semolina pudding cake with plums, golden tomatoes and mascarpone ice cream.

In addition to revamping the entire menu, Boka is sporting a new design, which is largely the work of Warren Ashworth, formerly of New York’s Bogdanow Partners, which designed Union Square Cafe in New York, Rubicon in San Francisco and other major restaurants.

Boehm and Katz also operate the nearby Landmark Grill and Lounge, a more casual bar and grill, and are preparing to open their third restaurant, Perennial, which they describe as a contemporary bistro. Tentori also will be called upon to work on the menu at Perennial.

Although some Chicagoans are still discovering Boka, others have become loyal customers. According to a recent Chicago Tribune review by critic Phil Vettel, Tentori has transformed Boka into a “dazzling” restaurant.