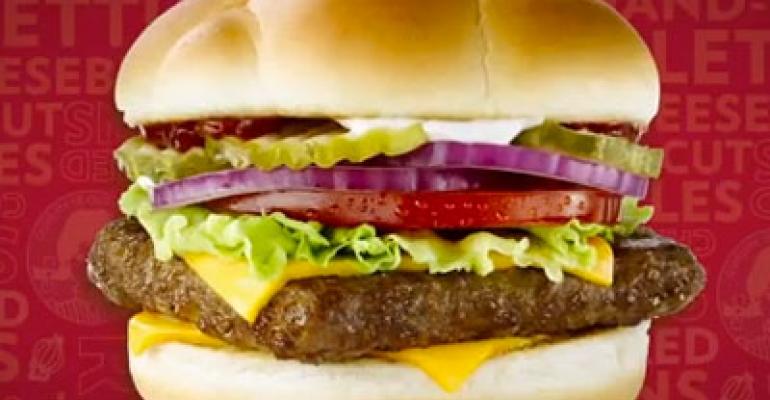 Wendy’s introduced on Monday its new line of Dave’s Hot ‘N Juicy Cheeseburgers, a product launch it has tested for nearly a year and a major move sources say is needed to spark sales.

The cheeseburgers, named for the brand’s founder and longtime spokesman Dave Thomas, feature thicker beef patties, toasted and buttered buns, and upgraded ingredients like crinkle-cut pickles and red onions. At a downtown Chicago location, the burger was selling for $3.99 for a single, $5.19 for a double and $6.59 for a triple.

Wendy’s first began its test of the menu item with advertising in Las Vegas in November 2010. During the test time, competitors like McDonald’s — which rolled out its Angus Third Pounder burgers in July 2009 — and regional chains like Five Guys Burgers & Fries and Smashburger have each made waves with “better burgers.”

Wendy’s executives said during its second-quarter conference call that the new burgers produced an incremental same-store sales increase of between 2 percent and 3 percent in test marketing. As part of its “Project Gold Hamburger” effort, Wendy’s tested the upgraded cheeseburgers in Las Vegas; Virginia Beach, Va.; Providence, R.I.; Austin, Texas; and Mobile, Ala.

“The upgraded cheeseburger line has the potential to help Wendy’s capture one additional percentage point of [quick-service] burger market share over the next two to three years,” he said, “which we estimate would contribute $65 million in annual [earnings before interest, tax, depreciation and amortization.]”

The chain’s marketing for Dave’s Hot ‘N Juicy Cheeseburger marks another return to form for Wendy’s, which has always prided itself on quality menu items and authentic marketing from the founder. Dave Thomas’ daughter Wendy Thomas, the brand’s namesake and a franchisee, stars in the new commercials for the revitalized sandwiches. Prior to the use of Wendy Thomas, Wendy’s had struggled following Dave Thomas’ 2002 death, unable to find a cohesive advertising voice. The chain once used a “Red Wig” campaign, which caught heat among franchisees, as well as an animated version of Wendy, for the “It’s waaaay better” campaign. It currently uses the slogan, “You know when it’s real.”

“I know [Wendy Thomas] has more personality than they’re showing,” Dahlen said. “But it took a while for people to get used to Dave in the ads, and then they built [upon themselves] one after another, and Wendy’s rode that campaign for more than 10 years.”

Dahlen, who was a marketing executive at Wendy’s in the 1980s, said a long campaign with Wendy Thomas could be beneficial for the chain.

“They’re about to have a new CMO, and then likely an agency review, so it would be nice to have some consistency [in the brand’s advertising],” he said.

Even though Wendy’s is still highly regarded for its taste, a view supported by the brand’s No. 1 ranking in Zagat Survey’s “2011 Fast Food Survey,” the competition from McDonald’s premium burgers and the fast-growing “better burger” chains necessitated the big menu move, Dahlen said.

“You can’t just sit there and hope people come back to the Wendy’s single or double,” he said. “They’re pulling out all the stops, leveraging all their history and heritage that those upstarts don’t have.”

Wendy’s, like the other mature, burger chains McDonald’s and Burger King, did not place in the top 10 “NRN Consumer Picks” rankings of limited-service chains, nor did it place in the top five among burger brands. That study showed consumers favoring Five Guys and In-N-Out. Wendy’s highest score, for food quality, was in to the top tier, however.

Change in the air

The introduction of Dave’s Hot ‘N Juicy Cheeseburger concludes Project Gold Hamburger, which lasted more than a year. Wendy’s has said its culinary research and development continues, as a test of breakfast is scheduled to reach 1,000 of Wendy’s 6,000-plus locations in the United States by the end of the year. Another big effort, Project Gold Chicken, will look to update the chain’s chicken sandwiches with more premium versions next year.

Amidst all this activity in the product pipeline, Wendy’s recently named a new chief executive, Emil Brolick, a former Yum! Brands Inc. executive, and continues to search for a new chief marketing officer, following the departure of Ken Calwell this summer. Brolick replaces Roland Smith, who stepped down following the divestiture of Wendy’s former sister chain Arby’s in July, which dismantled Wendy’s/Arby’s Group Inc. Wendy’s now operates under The Wendy’s Co. and Arby’s was purchased by Roark Capital Partners.

Executives said the equipment upgrades required of franchise and company-operated stores to produce Dave’s Hot ‘N Juicy Cheeseburger cost about $20,000 per restaurant, and the company has offered to provide franchisees with partial loan guarantees and a subsidized lower interest rate for their capital investment.

As of last month, however, the chain’s largest franchisee, WendPartners Franchise Group, had not installed the equipment, prompting Dublin, Ohio-based The Wendy’s Co. to sue the operator of 329 restaurants in 20 states. The lawsuit is ongoing, and Wendy’s is “actively seeking a settlement,” said corporate spokesman Denny Lynch.

Dublin, Ohio-based Wendy’s operates or franchises more than 6,500 restaurants in the United States and 25 foreign countries.