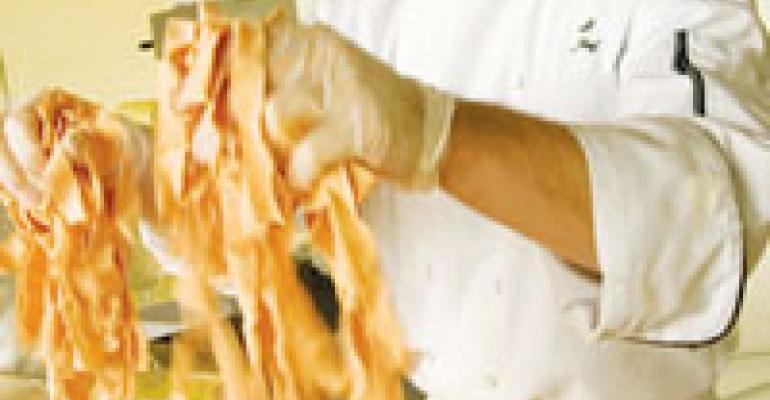 With Mediterranean cuisine heralded as one of the culinary trends to watch, several restaurant operators are looking to capitalize on the interest in the region’s food through franchising.

“There’s a tremendously positive outlook for Mediterranean cuisines,” said Nancy Kruse, founder of The Kruse Co. consulting firm in Atlanta. At the recent Menu Trends & Directions conference in Dallas, she said Mediterranean food is high on the radar of research and development executives because it fits in with the comfort consumers are craving and the escape they have come to expect.

Mediterranean cuisine is also healthful, she said, which is another characteristic guests seek along with flavor and freshness.

“It’s the rare ethnic cuisine that is at the same time both comforting and exotic,” Kruse said.

Mintel Menu Insights, which tracks menu trends from 350 U.S. chain restaurants and 150 independent ones, also noted that 2009 would be the year Mediterranean cuisine reached a new level of popularity, as operators reached beyond familiar items like tapas, gyros and hummus and began filling menus with more authentic dishes, as well as Spanish olives, Greek cheese and Middle Eastern yogurt sauce.

The Garbanzo chain prides itself on from-scratch cooking with no preservatives or trans fats, said founder Alon Mor.

“We want to offer fresh-made authentic dishes, but still allow customers to feel relaxed and welcome, so we created a simple menu to walk customers through the ordering process,” Mor said.

Mor said that in addition to franchise expansion, Garbanzo was planning to build 10 additional stores in the next 14 months. An owner in the company is Ken Rosenthal, who founded St. Louis Bread Co./Panera Bread.

On the West Coast, ChickPita Fresh Mediterranean Grill of Laguna Niguel, Calif., which is about to open its second unit, is working with a national franchise consultancy to expand the fast-casual concept. Founder Leo Timatyos said he is also considering Las Vegas for expansion.

Seeking to franchise on the East Coast is Naples Tomato, a four-year-old casual-dining restaurant that encourages diners to sample wine through an in-house, debit-card-style wine dispenser that Naples Tomato dubs “Vine Dining.”

The concept’s franchise program was designed by iFranchise Group Inc. of Chicago and the Faegre Benson LLP law firm.

“We were inspired by the wonderful village restaurants that are institutions in the Mediterranean lifestyle, offering homemade food and imaginative wine lists,” said Jack Serfass, co-founder and co-owner of Naples Tomato.

The typical Naples Tomato store would cover 7,000 square feet and seat about 220. The concept has an open kitchen, bistro decor and extensive wine program. Naples Tomato has received honors from Wine Spectator magazine.