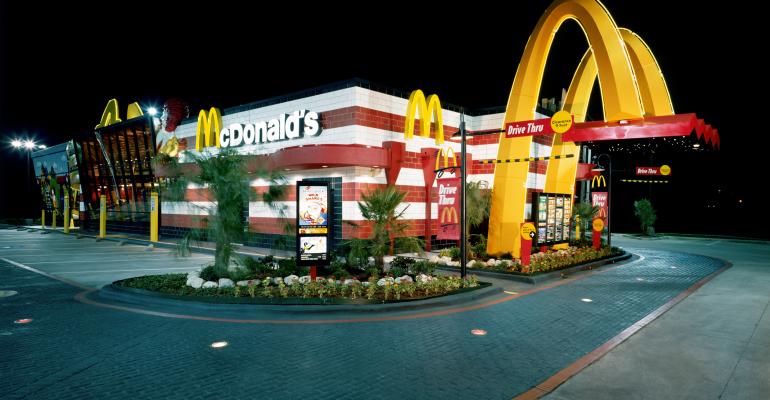 A Heard on the Call report following first-quarter earnings

Even as consumer confidence stagnates domestically and in Europe, McDonald’s will focus on modernizing restaurants, evolving the menu and engineering value, said Don Thompson, the company’s president and chief operating officer, in an earnings call on Friday.

McDonald’s net income rose 5 percent and same-store sales increased 7.3 percent for the quarter, and the brand gained market share in the United States and abroad, according to the company's first-quarter earnings report.

The call marked a transition from McDonald’s Corp. chief executive Jim Skinner, who will retire June 30, to incoming leader Thompson, but both executives stressed that the company’s strategy going forward would remain as focused as ever on the brand’s Plan to Win.

Asked what he thought his legacy would be after taking over for Skinner, Thompson responded that he would preach fundamentals just like Skinner. Thompson gave a few hints toward McDonald’s near-term strategy.

“When we talk about modernizing the customer experience, technology will play a big role in that, and so will the new look of McDonald’s,” he said. “When we talk about optimizing the menu, we’ll be more focused on nutrition-based products, as well as our core items and premium products like those coming out of Europe. We’ve proven that we can scale products and learn from our other areas of the world, and we’ll do that at an accelerated pace.”

One recent example of that global collaboration, the Chicken McBites limited-time offer, contributed to the domestic system’s 8.9-percent increase in same-store sales, executives said. The item was developed in Australia and first was a promotional product in Europe.

McDonald’s other menu move in the United States meant to have a longer-term impact was the rollout of the Extra Value Menu, a new tier on the chain’s menu boards grouping items that already were priced between the Dollar Menu and Extra Value Meals.

“As we look at commodity pressures, there are aspects of the Dollar Menu that are tougher relative to cash flow for franchisees,” Thompson said. “With the new menu, we bring some products down to the lower level of price, like the 20-piece Chicken McNuggets at $4.99, which is compelling to customers. But it will also highlight products like Snack Wraps, which are much more accretive to margins. We’ll rotate some products in and some out, but we need value across the board.”

Analysts brought up the new menu at Burger King and fledgling sales recovery at Taco Bell, but Skinner noted that McDonald’s continued to take market share amid that competition and could withstand whatever rivals planned to dish out.

“Regarding Burger King and Taco Bell, of course we keep a close eye on them, but it’s not our first rodeo regarding this,” Skinner said. “They have spurts of enthusiasm for their brand, and they’re doing some meaningful things, but it’s still business as usual for us. We’re optimizing our menu and improving our relevance and accessibility, and we expect to maintain our competitive differentiation.”

Skinner added that McDonald’s has not changed its strategies around affordability and menu development in the United States because unemployment and consumer confidence have yet to improve dramatically.

The chain still plans to increase its investments in 2012 to improve traffic and throughput, which would allow for more locations to leverage multiple ordering points, such as dual-lane drive-thrus and taking orders on handheld devices.

Given the brand’s current pace of reimaging, it could exceed 800 domestic remodels in 2012, Thompson said. Chief financial officer Pete Bensen added that remodeled locations open longer than 12 months still show same-store sales increases at the high end of the 6-percent-to-7-percent range that McDonald’s projected for the reimaging program.

In the European division, where same-store sales rose 5 percent in the first quarter, “it was almost a tale of two Europes,” Bensen said, noting that the United Kingdom and Russia had double-digit same-store sales increases but the rest of the system, including heavyweights France and Germany, started to feel the pressure of austerity measures and depressed consumer confidence.

“We’ll enhance our marketing around local value,” he said, “so we’ll likely see a little dip in the average check, but as transactions grow, you get that back over time.”

Europe’s headwinds likely would necessitate marketing strategies similar to the value promotion in the United States during the economic downturn of 2008 and 2009, Thompson said.

“What we did then [in the United States] was put much more emphasis on value messaging and make our value offerings more prominent,” he said. “That helped us secure those customers whose discretionary dollars had decreased.”

Value menus like this already exist in the United Kingdom, Germany and France, and now McDonald’s will shift customers’ attention to those offerings, he added.

“In France, we haven’t had the same competitive set and hadn’t had to go [to value promotion], but now we’re going there because there’s less consumer confidence,” he said. “But in Europe, we have a foundation of having our restaurants reimaged, which allows us to sell more premium-based products.”

Aggressive value engineering needed in some small markets feeling the pinch, such as in Portugal where a value-added tax has increased from 13 percent to 23 percent, means that short-term margins will decrease, “but we’ll secure the customer base and move the brand forward” over the long term, Thompson said.

Same-store sales in the company’s Asia/Pacific, Middle East and Africa, or APMEA, segment rose 5.5 percent in the first quarter. Australia and China had good quarters, but Japan’s performance a year after the March 11, 2011, tsunami remains uneven, executives said.

RELATED:
• McD to franchise in Russia for first time
• Growth in China to benefit restaurants

Australia launched a Loose Change Menu and a Spicy Chicken McBites limited-time offer. It will be the first country in APMEA to sell Real Fruit Smoothies. McDonald’s ran a Big Mac promotion in Japan to deal with that market’s volatility. Its limited-time offers around Chinese New Year and value promotions at lunch and breakfast drove an 8.5-percent same-store sales gain in the first quarter in China.

As with Europe, APMEA’s value focus might erode margins in the short term, but the brand remains optimistic for both divisions’ long-term prospects, Skinner said.

“Margins, as we know, are a top-line game,” he said. “This is all about generating more traffic through leveraging everyday affordability. We think that will be beneficial as traffic increases and the top line grows into the future.”

Oak Brook, Ill.-based McDonald’s operates or franchises more than 33,000 restaurants in 119 countries, including more than 14,000 locations in the United States.