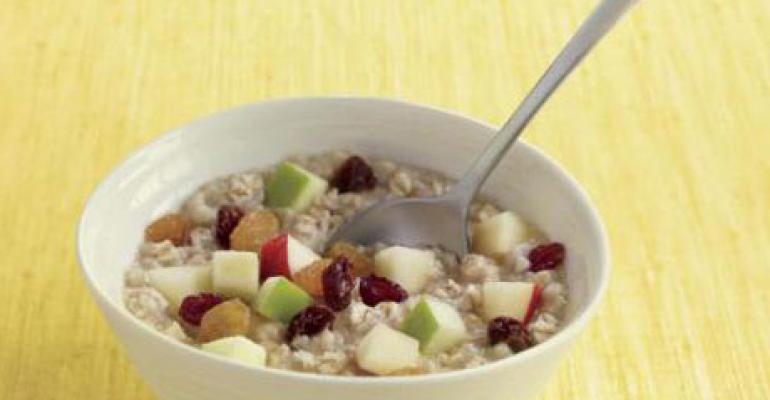 McDonald’s said Monday it has completed the nationwide rollout of its Fruit & Maple Oatmeal, the quick-service chain’s first new permanent breakfast item since 2008.

The oatmeal, priced at $1.99, will be served all day at the more than 14,000 McDonald’s restaurants in the United States.

The chain said its new item — made with whole-grain oats, light cream and brown sugar, and topped with diced apples, cranberries and raisins — contains 290 calories per serving and provides two-thirds of the daily recommended amount of whole grains, as well as half a cup of fruit.

“With McDonald’s Fruit & Maple Oatmeal, we’re offering a portable, affordable and balanced breakfast solution to help customers start their day right,” said Cindy Goody, McDonald’s senior director of nutrition. “McDonald’s wants to help make it easier and more inviting for our guests to eat more whole grains and fruits, and Fruit & Maple Oatmeal is an effective way to help our customers integrate these important food groups into their daily diets.”

The brand had tested oatmeal last year, beginning in March in Northern California and the Baltimore-Washington, D.C., area.

Breakfast long has been a strong daypart for McDonald’s, and for much of 2010, the chain touted its Breakfast Dollar Menu, which launched in late 2009, as a sales and traffic driver. In an October conference call with investors and financial analysts, McDonald’s executives said the chain's breakfast business remained robust in the third quarter of 2010, even as its largest quick-service rival, Burger King, introduced a revamped breakfast menu and other chains like Wendy’s and Taco Bell tested their own morning menus.

But oatmeal has been a key offering for many restaurant brands, especially coffee and beverage chains. Starbucks rolled out oatmeal in the fall of 2008, while Caribou Coffee debuted the product last January. Jamba Juice promoted its oatmeal by offering it for $1 on Wednesdays last January as an item meant for New Year’s resolutions to eat more healthfully.

Family-dining chain Bob Evans also is leveraging the “resolution solution” trend this January, promoting its “Fit from the Farm” menu of lower-calorie items, including the Fruit & Yogurt Crepe with Quaker Oatmeal and a cup of oatmeal that is part of the Pick-Three Breakfast Combo.