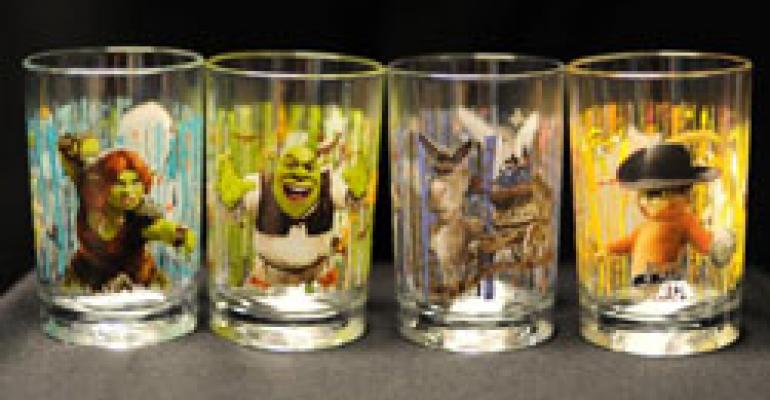 McDonald's USA is recalling an estimated 12 million “Shrek Forever After” promotional drinking glasses after learning the designs on the cups contained cadmium, a known carcinogen.

McDonald's began selling the 16-ounce glasses May 21. After collaborating with the U.S. Consumer Product Safety Commission, the fast-food company determined “in an abundance of caution” that a recall was necessary, even though an independent laboratory determined the glasses to be nontoxic and in compliance with all federal and state requirements for levels of cadmium in manufactured products.

“When the U.S. Consumer Product Safety Commission approached McDonald’s about cadmium in their current movie-themed drinking glasses, the company responded quickly, agreed to cooperate fully and acted on the side of caution,” said Scott Wolfson, the CPSC’s director of the Office of Information and Public Affairs. “The glasses have far less cadmium than the children’s metal jewelry that CPSC has previously recalled.”

In January, CPSC led a recall of children’s jewelry manufactured in China and sold in such American retailers as Walmart and Dollar N More. Those products had replaced typical lead with as much as 91 percent cadmium, which also is found in cigarette smoke and has been linked to certain kidney and lung ailments.

McDonald’s will begin posting instructions June 8 on a special microsite, www.mcdonalds.com/glasses, for how customers can return the Shrek glasses and obtain a refund. Concerned customers also may call (800) 244-6227 for more information.

“McDonald’s has a longstanding, cooperative relationship with the CPSC and continues to follow their lead as testing protocols and new scientific information become available,” the company said in a statement.

No other promotional glassware is involved in the recall, McDonald’s said.