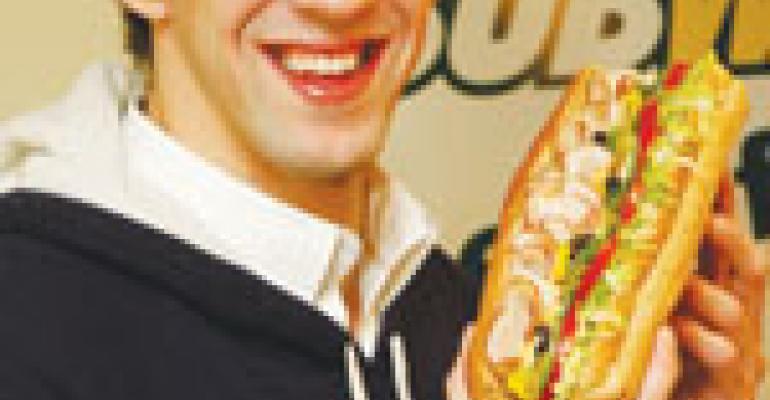 Make a splash with a sports star

Restaurants and athletes are natural marketing partners, according to chains that have found success with sports partnerships. Food is not just a lifestyle choice for athletes, but fuel for their transcendent performances, and a familiar sports figure can help a restaurant brand advance its message.

Some past pairings include ex-Dallas Cowboy Troy Aikman and Wingstop, Magic Johnson and Aramark, and the Boston Red Sox’s Jonathan Papelbon and Dunkin’ Donuts.

However, some experts say not every partnership between a brand and an athlete is a slam dunk.

“I think there are two things a chain tries to get,” says Arjun Sen, president of Restaurant Marketing Group. “One is awareness, and second is relevant awareness.”

Subway, the Milford, Conn.-based sandwich chain, has a history of teaming up with athletes to promote its brand. Recently, the 30,000-unit brand joined with swimmer Michael Phelps, who has enjoyed increased recognition after his record-setting performance during the 2008 Olympics.

But chains need to be sure that sports stars offer more than just a familiar face, Sen says. The right partner will also serve to reinforce the brand’s identity.

“Phelps is at the top of the news. You just want to be next to him,” Sen says. “But you want to find someone with common traits to the brand. That to me becomes a much more relevant connection.”

Tony Pace, Subway’s chief marketing officer, says the chain is pleased that Phelps is well-known after his performance but plans on focusing on his familiarity with Subway and its sandwiches as well as how he uses Subway to fuel his training.

“We are using Michael as much for what he is planning to do over the next four years as for what he has already accomplished in his area of swimming,” Pace says. “We are certainly happy with the fact that people know him because of his performance this summer, but we are really about his performance going forward. We are part of the process to see that he continues to perform at a high level.”

Phelps was a fan of Subway before the marketing deal was consummated, Pace says.

Many of the sports figures Subway has used in its marketing efforts are not as top of mind as Phelps. Pace says Subway tries to partner with athletes that already are on their way up in their respective sports, but familiar with the brand’s food and experience.

“We have been using athletes for a number of years now, because it helps us dimensionalize the benefits of using Subway,” Pace says. “That has been a natural way of talking about Subway. Subway gives you the energy to perform at your best in whatever your chosen endeavor is.”

Pace feels that Phelps’ familiarity with the restaurant adds to his legitimacy as a spokesperson.

“That is real. It’s not, ‘Hi, I’m here representing for so and so today,’” Pace says. “Which is more distant, and, I think, potentially less impactful.”