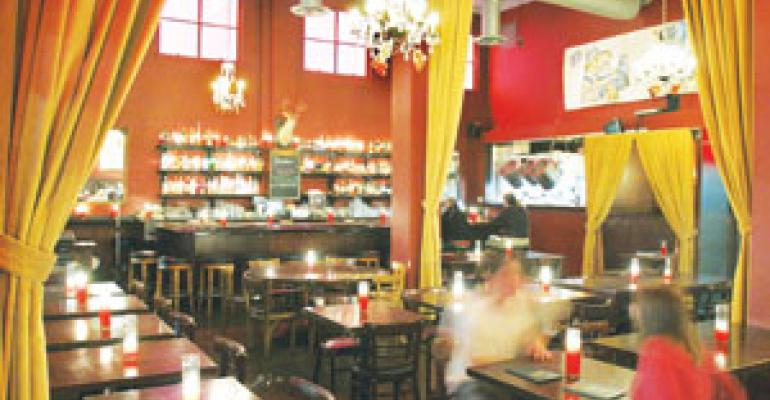 Luna Park revamps its bohemian image from the inside out

Back in early 2007, business was good, but not good enough for intrepid restaurateur A.J. Gilbert, owner of Los Angeles-based Luna Park, an upscale concept with a bohemian vibe. To increase sales and traffic, Gilbert decided to revamp the restaurant’s interior and exterior, add an outdoor cafe and hire a new chef to retool the menu.

“You have to have something new to say,” said Gilbert of why he embarked on the makeover. “[I wanted to] shine the place up after four years.”

While contacting an architect or a designer might seem the logical first step in revamping a restaurant, such wasn’t the case for Gilbert. Instead, he called his former business partner and long-time friend, Joe Jack. When the two created the original Luna Park decor back in 2000, they drew inspiration from the many restaurants where they’d worked together over the years and the exotic locales to which they’d traveled together. They bounced ideas back and forth until they came up with the look they wanted, consulted an architect about legalities and then hired contractors to execute it all. Though Gilbert and Jack are no longer business partners, coming up with a redesign for the L.A. location was collaborative.

“Sometimes when you look at something every day you stop seeing it,” Jack, who now runs Joe Jack’s Fish Shack in Puerto Vallarta, Mexico, said of his role as friend and advisor to Gilbert.

After gathering advice from friends and family, the biggest change Gilbert decided to make was to add more seating to the approximately 95-seat restaurant. His initial thought was to convert the restaurant’s back office into a banquet room. However, after learning that fire codes would have required creating a new entrance at a significant expense, he scrapped the idea and decided to add an outdoor cafe. The new 15-seat cafe echoes the restaurant’s interior, with stained-wood tables arranged beneath a brick-red awning. Planters filled with fichus trees provide insulation from the busy street noise and create an intimate, gardenlike setting. Outdoor heaters and drop-down, gold canvas “walls” allow the space to be used year-round.

Though it wasn’t in his original plan, Gilbert said adding the cafe proved to be the right choice in the end. While the banquet room would have been slow on summer weeknights, the cafe is busy. And while brunch was “always marginal” because the restaurant is located in a business district, the outdoor seating has made the daypart “quite busy,” Gilbert said. Though he hasn’t been through a winter with it yet, Gilbert anticipates the space will be booked for private parties during the holiday season.

After hearing comments from Jack that the storefront looked shabby, Gilbert knew the other big change he needed to make was to the restaurant’s exterior.

“I never felt like we finished the outside,” Gilbert said. “The exterior didn’t match the interior [or] reflect [its] ambience. We did it. We just didn’t do it very well the first time.”

The original exterior of Luna Park featured yellow, catcher’s mitt-shaped awnings and pale, wood-framed windows and entranceway. To make the outside more reflective of the restaurant’s bohemian interior, Gilbert had the small, yellow overhangs replaced with larger, brick-red awnings, the wood trim stained the same mahogany as the interior wood, and lighting installed that cast a warm red glow on the entire facade.

While Gilbert made major changes outside, he simply refreshed the inside. The well-worn concrete floors were resurfaced; a new coat of the signature red paint was put on the walls; several faded curtains were replaced; and the tables and booths were refinished.

Though he wanted to rejuvenate the restaurant’s appearance, Gilbert also knew he needed to inject some new life into the kitchen. Jack had always wanted to serve pizza at Luna Park, so Gilbert felt now was the time to add a brick pizza oven. Once he had the equipment he needed, Gilbert hired executive chef Todd Butler to retool the menu.

Butler began with the new oven, creating about half a dozen pizzas, including the Classic Margherita pizza and The Meatball, with Moroccan Kofta-style meatballs, mozzarella cheese, oil-cured olives, chile flakes, feta cheese and tomato sauce. He then expanded on the menu, which boasts French, Italian and American fare, by adding a host of Southern comfort foods, Mediterranean-inspired dishes and Asian items.

“I just reached a little further into things that were not there,” said Butler, who had lots of experience reinventing menus at restaurants such as Indigo in San Francisco, Kung Pao Kitty Cafe in Los Angeles and Nook Bistro in Santa Monica, Calif., before he joined Luna Park in 2007.

Though he made numerous changes, Butler also kept many of the restaurant’s signature, sometimes kitschy dishes, including the Warm Goat Cheese Fondue, Hawaiian Tuna “Poke” with Wonton Chips and the make-your-own S’mores dessert.

The total renovations cost approximately $175,000, Gilbert said. To save money, the restaurant remained open during construction, with the work being done overnight or early in the morning. While the work took nearly two months to complete—far longer than if he had just closed the restaurant—Gilbert said it was worth it.

“The worst part of [closing for] construction is that you’re spending [money] and not making [it],” said Gilbert of why he chose to keep the restaurant open.

Among the benefits Gilbert has experienced so far are increased sales and traffic, largely due to the increased seating capacity; higher check averages, especially at the bar because of the pizzas; and increased media attention, including numerous positive reviews.

“I think the changes we made were at the right time,” Gilbert said. “We always run a wait.”