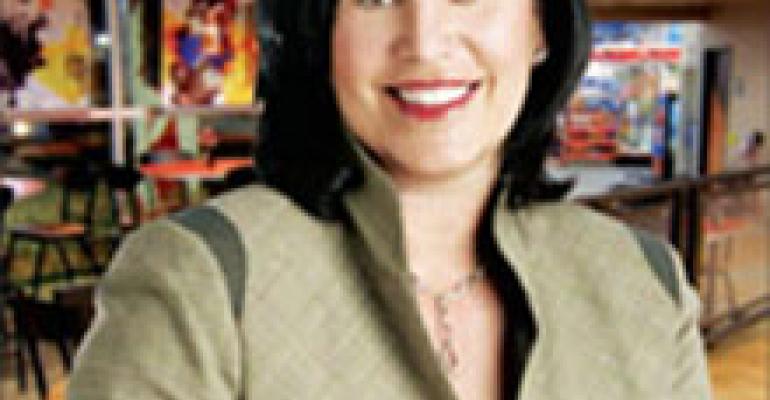 One of the darkest moments in Jack in the Box Inc.’s corporate history proved to be an opportunity to shine for Linda Lang, the company’s current chairman and chief executive.

It was 1993 when four children died and hundreds fell ill from E. coli bacterial infections caused by tainted hamburgers served by the San Diego-based Jack in the Box chain. The company, which suffered major hits to its reputation and coffers, used the situation to become a leader in the evolution of food safety systems and worked tirelessly to turn its fortunes around.

For Lang, it was a time to step out of her then-current financial role and get noticed by one of the company’s senior leaders, soon-to-be chief executive Robert Nugent. During the deadly outbreak, Lang was placed on a crisis team in charge of communication with franchisees, in addition to her work in finance.

“It became clear to me at that point that she was not only solid on the financial side, but had great strategic-thinking skills,” Nugent says. “I listened to her quite closely in her recommendations during that time.… I decided to put her on a track to see how far in the organization she could go.”

After that moment, which she describes as a “very significant” moment of corporate history that showcases the company’s resilience, Lang started to garner experience in various functions at the company, where she had worked since 1984, starting as an accounts payable supervisor.

“At one point I said to Linda, ‘How far do you want to go?’” Nugent says. “And she said she wanted my job.”

After stints in finance and marketing, Lang took a demotion to gain operational experience and spent more than a year heading up operations for the company’s then worst-performing region. In 15 months she had made it the top-performing region, recalls Nugent, who had worked at Jack in the Box since 1979 and served as chief executive from 1996 through 2005, when Lang succeeded him.

“Every assignment she was given was accomplished very well and very rapidly,” Nugent says. “People like working for her. She’s kind but also very tough. She’s smart, and people know that. No one puts anything over on her. She’ll call you on that in a New York minute.”

In addition to working in various aspects of the company, Lang also took four years away from full-time work to focus on her family and complete her master’s degree in business administration. It was a step that many colleagues say helped Lang to become a balanced executive.

Since Lang was named president in 2003 and chief executive in 2005, Jack in the Box, which is operator or franchisor of 2,107 namesake restaurants and 371 Qdoba Mexican Grills, has continued to grow in unit counts, sales, profit and recognition as an innovator in marketing and menu development.

For the company’s latest full fiscal year, which ended last November, Jack in the Box reported an 18-percent increase in profit from a year earlier to $108 million, on revenue growth of 10.5 percent to $2.8 billion. Jack in the Box’s same-store sales jumped 4.8 percent—the highest growth rate for the chain in seven years—driven both by a higher average check and additional traffic. Average unit sales rose to $1.35 million. Company shares were rewarded as its market capitalization increased 75 percent to nearly $1.9 billion.

For the most recent nine months of the company’s fiscal 2007, profit surged 32.7 percent from the same period a year earlier to $99.3 million, on a revenue jump of 5.9 percent to $2.2 billion. Same-store sales jumped 6.4 percent.

In other moves that have pleased Wall Street in a nearly unanimous way, Jack in the Box also instituted large share repurchases, returned cash to shareholders and launched an aggressive franchise strategy to help reduce corporate costs by increasing the percentage of franchised locations in the system through the sale of corporate restaurants and new franchise commitments.

“We are growing the business, franchising, reinventing the brand,” Lang says. “It’s a continuing strategy, that’s the focus…and yes, our goal is to become national.”

While the Jack in the Box chain operates in 43 states and the District of Columbia, two-thirds of those restaurants are in California, Texas and Arizona. The company has started to open in neighboring markets like the Midwest.

“I think Wall Street loves her,” says Jerry Rebel, Jack in the Box’s executive vice president and chief financial officer. “I haven’t met anyone who doesn’t think she’s genuine and down to earth, and she comes across that way in company town hall meetings, with franchisees, with analysts or investors. It’s all the same, it’s who she is.”

Lang took over day-to-day operations in 2003 and began to implement strategic changes surrounding the reinvention of the now 56-year-old Jack in the Box brand through menu, marketing and service improvements and the reimaging of the restaurants. The company also focused on the growth of both Jack in the Box and Qdoba, as well as efforts to become a more franchised-focused business.

“It’s been about executing, and we’ve done really well over the past three years,” Lang says.

Jack in the Box upgraded the menu with innovative products that boast high-quality ingredients like its Ciabatta Breakfast Sandwich, Chicken Fajita Pita and the latest, the Sirloin Burger, all pitched by one of the most successful advertising characters in the industry, the fictional founder and company chief executive Jack, who was brought back to the airwaves in 1995 when Lang worked in the marketing department.

In addition to menu innovation, Jack in the Box has re-imaged 118 restaurants through the first three quarters this year. The redesign includes new interior finishes including ceramic tile floors, a mix of seating styles from booths and bars to high-top round tables, decorative pendant lighting, and new graphics and wall collages.

The program, which also includes updated music, uniforms and packaging, is expected to be rolled out to the entire Jack in the Box system in about five years.

“In the increasingly competitive premium-burger category, Jack in the Box management has done an excellent job of providing its customers with compelling new product news,” Steven Rees, an analyst at J.P. Morgan Securities Inc. says in a research note. “Additionally, asset remodels have been beneficial for the company, providing a sales lift and a [return on investment] of 20 percent or higher.”

“She truly understands what it takes to compete within our industry,” says Paul Schultz, Jack in the Box president and chief operating officer. “The strategies that we have established require a tremendous amount of fortitude and leadership.”

Title: chairman and chief executiveCompany: Jack in the Box Inc., San DiegoAnnual sales: $2.8 billionNo. of units: 2,478, including 2,107 Jack in the Box restaurants and 371 Qdoba Mexican GrillsCheck average: undisclosedCareer highlights: Taking over as Jack in the Box chief executive in 2005; promotion in 2003 to president of the company.Hometown: San Francisco Bay AreaEducation: B.A. in finance from the University of California, Berkeley; M.B.A from San Diego State UniversityPersonal: married; two childrenHobbies: golf, travel

An increasingly difficult business environment as labor and commodities costs increase does not make Lang’s job any easier.

“One of the challenges in our industry is always cost management,” Lang says. “I think for us this whole brand reinvention was to really differentiate us, make [Jack in the Box] more of a destination brand, which gives us more pricing power that puts us in a good position in terms of managing costs.”

The culture at Jack in the Box also helps the company grow and succeed, Lang says.

“I grew up here, so I always have to ask others what’s unique about the company,” she says. “And it’s true what they say, [Jack in the Box] is a large multibillion-dollar company, but it feels like a smaller company. We’re collaborative, we have values of care and respect, yet we all strive to improve the business every day.”