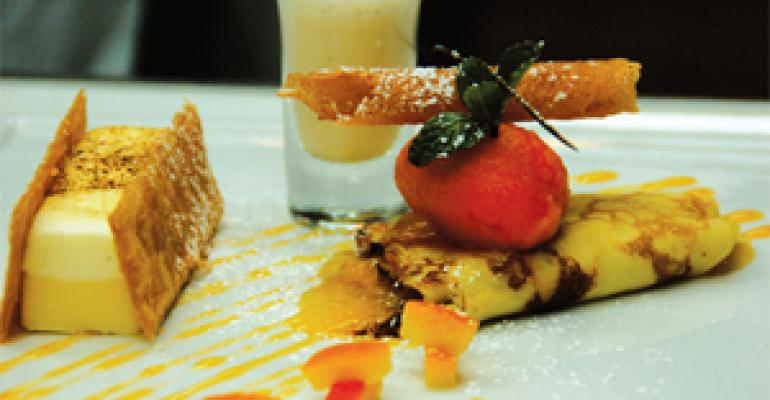 Chefs around the country are bemoaning the losses of California’s citrus crop after the central and southern California areas were hit with record low temperatures for several days in January, causing an estimated $800 million in damage to citrus crops.

Navel and Valencia oranges were the hardest hit, but the smaller yet emerging varietals industry also suffered setbacks, forcing chefs across the country to scramble for alternative sources for Cara Cara oranges, pixie tangerines and Meyer lemons.

Typically, this is the time of year when winter oranges, lemons and grapefruits shine, and, as of presstime, chefs said they needed more time to assess the supply situation before deciding whether to move citrus dishes off their menus.

Dean Corbett, chef-owner of the fine-dining restaurant Equus and the adjoining lounge Jack’s in Louisville, Ky., says he plans to use sous-vide methods to stock up on lemons and fresh lemon juices before prices climb too high. He also planned to rely on the use of quality purées on the market.

Adrian Hoffman, group chef for the Lark Creek Restaurant Group, based in San Francisco, fell in love last year with Cara Cara oranges, a navel variety with a dark pink interior, which he used in a Dungeness crab salad at One Market, one of 10 restaurants operated by the company.

Since the freeze, however, Hoffman says he has not been as impressed with the quality of available citrus. “We are season-centric,” he says. “We taste what’s good, and what’s good ends up on the menu.”

Bob Blakely, director of grower services for California Citrus Mutual, a statewide trade group, says the exotic citrus varieties, such as Minneola and Murcott tangerines, are a very small part of California’s $1.3 billion citrus industry and many such fruits are new to growers in the region, which supplies about 95 percent of the nation’s fresh oranges.

“We haven’t put a Mandarin crop through this kind of freeze before,” Blakely says. “The best thing we can do now is let them sit on the tree for a while, and we’ll be testing them for quality in a few weeks.”

Some chefs said they refused to abandon the orange- and lemon-inspired dishes they created for their winter menus, despite the expected skyrocketing prices for the fruits. Josiah Citrin, for example, chef-owner of the Santa Monica, Calif., restaurant Melisse, has several dishes that use oranges and lemons this season. Because the restaurant’s name means “lemon balm” in French, and because of his own last name, he feels a touch of citrus is expected on the menu.

“I’ll probably just stick with it unless prices get totally out of hand,” he says.

At Melisse, Citrin offers his own take on duck à l’orange. The plate includes duck breast glazed with the reduced juice of Valencia oranges that has been infused with cracked coriander seeds and caramelized honey. The meat is served with a couscous made with the duck stock and tossed with orange zest, dried fruits, curry spices and salsify.

“Salsify and orange is a really nice combination,” Citrin says. For a sauce, Citrin makes a marmalade with the orange skins and folds it into a duck stock reduction, garnishing the plate with orange segments macerated in olive oil and fleur de sel. The dish is $39.

On the dessert menu, Citrin plays with lemons in several incarnations. For a sweet and salty flavor he places lemon curd in a mold and tops it with a sheep’s milk cheese that is gratinéed. The curd is bolstered by two vanilla crisps.

On the same plate comes a vanilla crêpe Suzette with a jam made with clementine or Satsuma tangerines mixed with Mandarin oranges. The dish, which is $14, is garnished with a blood-orange sorbet and a lemon tuile and finished with an orange-juice reduction.

“We go through tons of those juices every day,” he says. “You can’t just say I’m going to raise the price of a lemonade by $5.”

On the East Coast, chefs say they have not been as impacted by the freeze in California because of their access to Florida citrus fruits—though prices for those fruits have increased since the losses in California created a greater demand for the limited supply. Ed Witt, executive chef and co-owner of the recently opened Varietal, a market-driven restaurant in New York’s Chelsea neighborhood, says he gets a number of citrus fruits from an organic farm in Florida.

With a sautéed snapper or John Dory, for example, Witt serves a hazelnut-cauliflower purée garnished with blood orange segments and topped with brown butter emulsified with the blood orange juice. Tempura caper berries complete the dish, which is $28. “Blood oranges work well, not only for the color, but because they’re not as sweet as regular oranges,” he says.

On his six-course, $75-tasting menu, Witt uses white grapefruit as a garnish for seared bay scallops dusted with fennel pollen, which he serves with crème fraîche accented by paddlefish roe and micro fennel.