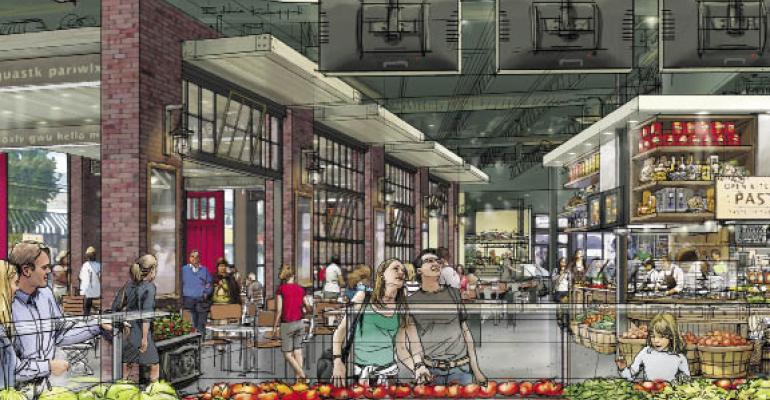 Each weekday between 3,000 and 8,000 people visit Eataly, the $20 million food hall opened last August by a group of investors, including famed chef Mario Batali. On weekends, the number swells; 12,000 people come to taste the Italian specialties, snacks and artisanal foods stationed throughout the 50,000-square-foot New York space.

Eataly is among the grandest of the growing crop of large-scale, multistation food halls drawing crowds and pushing the envelope by turning out masses of quality food quickly in an upscale setting. Companies large and small are seeking to cash in on a craze that lets chefs showcase the scope of their talent through a broad array of offerings that beckon to an increasingly food-obsessed nation.

“Food halls are a natural construct,” said Clark Wolf, a New York-based restaurant consultant. “People buy food where there’s food. Sometimes it’s a farmers was growing up, there was always a café at the grocery store.”

The new food halls are decidedly more stylized, however, and the involvement of personalities like Batali and Todd English raises their visibility. English opened The Plaza Food Hall by Todd English at The Plaza Hotel New York last June. Reports have him opening another food hall in Chicago this summer.

In New York, English’s food hall has stations serving pizza, seafood, wine and more to 1,200 guests per day from a 5,400-square-foot space with 80 seats.

“The variety of offerings is a very desirable feature that you can’t get everywhere,” said Jeffrey Beers, the concept’s designer in explaining its appeal. “The second thing that I think is really very interesting is the social dynamic that goes on, the kind of culinary Facebook notion. I think people like to be seen and to see others. You are watching lots of different types of people enjoying themselves and being with others.”

“I think we really filled a gap here because everything else around here was either super, super high-end or like the corner deli,” said Mike Suppa, executive chef, referring to the food hall’s location near Central Park. “We really brought a nice mid-range dining option to the area. I can provide food that is the quality of any of the high-end restaurants in the area without breaking the bank.”

He added, “We do a very big Monday to Friday business lunch. They are in and out the door in 35 minutes.”

At The Plaza Food Hall, the cooking equipment is not all that different from that of a conventional Todd English restaurant such as Olives. The difference is that the customers at the hall’s eight food stations are dining at marble counters only a few feet away from the cooking action. Not only do the stations combine to serve more than 1,000 covers a day, they also handle the bulk of the prep work.

“We wanted to keep it visually pleasing because we have people seated there all the time, but it still has to be functional, because all of our cooking is done from scratch,” Suppa said.

Beers avoided the commercial-kitchen look by using attractive finishes and design tweaks. For example, he gave the Ocean Grill & Oyster Bar station a centerpiece of twin eight-foot seafood displays that show off lobsters, shrimp, shellfish and fin fish on ice.

“I set it up like a fishmonger’s display,” said Suppa. “I do my butchering right from that piece of equipment, so many times the fish goes straight from my cutting board to the pan.”

At the pizza station, Beers covered the gas-fired oven with red glazed brick.

“Underneath, it’s just an industrial pizza oven, nothing to look at,” said Beers. “But we made it into a decorative contribution to the front-of-the-house.”

Suppa’s workhorse for seafood cookery is a four-burner gas range and grill. A tabletop fryer handles light items such as fried oysters. A small back kitchen does messier tasks like mixing dough, but most everything else is prepped at the stations in front of the guests.

“All of our cooking here is from scratch,” said Suppa. “I don’t bring anything in prefab.”

Exhibition-style, scratch food preparation is called “on stage” cooking at the six multistation marketplaces called Open Kitchens that Toronto-based Richtree Market Restaurants has in Canada. The company is currently building its first Open Kitchens in the United States. The concept will combine marketplace-style dining and a natural foods market, at the Westfield Old Orchard shopping mall in Skokie, Ill. It is slated to open in midsummer in the mall’s former food court space.

Open Kitchens will sprawl over 17,000 square feet with stations cooking Asian food, pizza, pasta, seafood, desserts and many other offerings. It will have about 500 seats inside plus another 140 on a seasonal rooftop patio. Richtree outlets of similar size north of the border have averaged as many as 4,000 customers per day, said Kevin McCormack, director of large-format restaurant concepts for Richtree.

“Picture a bustling farmers’ market with bushels of fresh produce arriving daily from the farm, artisan breads baking in the oven, pasta and pizza dough made from scratch,” said McCormack. “Customers will watch their dishes being cooked before their eyes, and they can buy the ingredients to cook the same dish at home.”

Open Kitchens will keep up with the anticipated high volume by using advanced cooking equipment and streamlined recipes. Stations will have up to a dozen fast-cooking induction units, some for primary cooking, the rest for holding small batches of hot food for service. Single-cup coffee brewers will grind beans to order. A pizza oven firing with gas and wood will be a highly productive focal point. Two combi ovens will be used for controlled, programmable cooking. An undercounter blast freezer at the dessert station will keep freshly made gelato and ice cream at their best.

In addition, McCormack said that recipes would avoid complication and focus on the freshness and quality of ingredients. For example, fresh pastas will be made from scratch and quickly cooked with pasta cookers. Produce displayed around the stations will serve as working stock for cooks.

“If you need a pepper, you take one from the display, wash it and cook it,” said McCormack.

Another variation on the food hall theme is Society Fair, a European-style food emporium in Alexandria, Va., that is expected to open this spring. Chef and restaurateur Cathal Armstrong and his wife Meshelle, also owners of Restaurant Eve there, are equipping a 7,000-square-foot space in Old Town Alexandria with a bakery, butcher shop, wine shop, prepared food area and 50 seats for dining, plus a well-equipped studio kitchen for demonstrations and cooking classes.

“We expect to get people who are interested in dining at Restaurant Eve every day, but might not have the pocketbook, plus people who want to eat local, sustainable foods, but not in a restaurant every night,” said Armstrong.

At one end of Society Fair will be the studio kitchen, bar and dining area. At the other is a retail market featuring house-made and packaged specialty foods. The prepared-foods selection will offer freshly baked breads and charcuterie. A window into the bakery will give guests a glimpse of the baker’s handiwork. From another part of the hall, they will see the charcutier at work in a refrigerated room equipped with a band saw and sausage-making equipment.

At the studio kitchen, outfitted with a six-burner range, patrons will learn to make a dish like paella with ingredients from the house and afterwards dine on the results. Although Armstrong said he chose that range because he believed customers will be more familiar with open burners, the range in the back kitchen will have a flattop cooking surface, which he finds more useful.

“Instead of cooking just six things on a six-burner stove, you can cook 18 things,” said Armstrong.

At the Eventi Hotel, a Kimpton property in New York, the 20,000-square-foot FoodParc by restaurateur Jeffrey Chodorow is billed as a “modern food court” with “stands” featuring specialty coffee, Asian cuisine, oven-baked flatbreads and gourmet burgers.

“You are eating what you usually find in a food court, but it is made right there,” said Terry Zarikian, director of product development for China Grill Management. “It is not premade, not frozen; it is fresh.”

Cover counts average about 700 per day with about 500 of those coming at lunch, said Zarikian. Those figures are expected to climb in the spring, when hours are extended and an outdoor eating area is opened.

At Fornetti, the Italian food stand, a gas-fired pizza oven turns out flatbreads with unusual toppings, including antipasti, Caesar salad and pasta.

“One of the main attractions when you come into FoodParc is seeing right into the oven, flames and all,” said Wong.