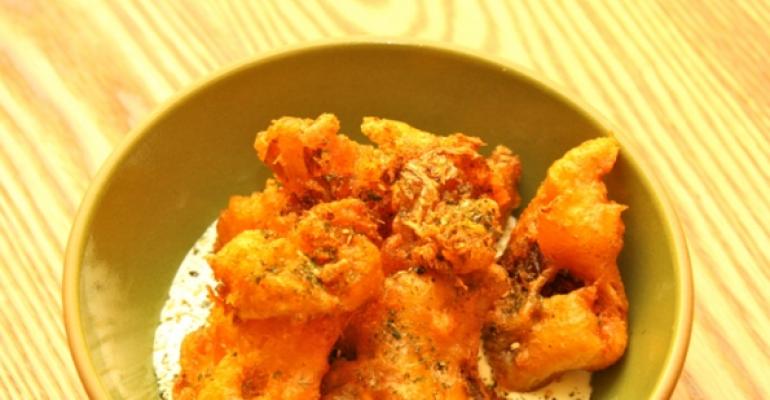 Kimchi gains popularity in the U.S.

Korean food in the United States has long languished in obscurity while the cuisine of its neighbors, China and Japan, have been active players in the development of the modern American pantry. The reason Korean-Americans often cite for the mainstream's rejection of their cuisine is the prominence of spicy, garlicky pickled vegetables known as kimchi — but it’s that very ingredient that chefs are now embracing across the country.

Kimchi is usually part of the panchan, or side dishes, served in a Korean meal, although Koreans also cook with it — and so do many American chefs.

Applications range from its use as a seasoning in the local white soybean soup with kimchi, sweet potato, sushi rice-and-mackerel croquette for $14 at Elements in Princeton, N.J., to a component in the $16 fluke crudo at Kelly Liken in Vail, Colo. In the latter dish, pickled beet kimchi tops the fish, which is accompanied by ginger-lemongrass sorbet and dressed in charred scallion vinaigrette.

“We will always have two to four types of kimchi on hand, typically always a traditional, spicy red kimchi [chile flake, ginger, soy sauce, salt, sugar, carrots and scallions] with napa cabbage, and one traditional white kimchi [without chile] with daikon," he said. "The other vegetables will be done in either a red or white style and we feature predominantly local vegetables.”

Clouser added that the fact that kimchi is fermented means it has idiosyncrasies that he, as a chef, enjoys. “It changes with time and mood, and it is a lot of fun to make, to check on and to tweak over time,” he said.

Bob Cook, sous chef at Cypress in Charleston, S.C., has been making his own kimchi in-house for about four years. He puts it on items such as a $12 tuna tartare with kimchi, cucumbers, carrots, cilantro and citrus soy on flatbread or $12 crispy pork belly with Korean mustard and kimchi fritters. He also puts it on his $8 bánh mì sandwiches.

Cook said one of the nice things about kimchi is that you can use virtually any vegetable to make it.

Daniel Campbell, executive chef at Tallula Wine Bar & Bistro in Birmingham, Mich., makes Brussels sprouts into kimchi, which he uses in a $30 dish of roasted scallops and pork belly.

in Chicago, accompanies seared halibut in ginger-shrimp broth with baby bok choy and pork belly and cabbage kimchi potstickers. That dish is $16.

Anthony Meidenbauer, chef at Holsteins Shakes and Buns at The Cosmopolitan hotel in Las Vegas, combines kimchi with kalbi, a Korean short rib preparation, in a $14 quesadilla that also has asadero cheese and chile mayonnaise.

He also makes a Korean-inspired hamburger called “Bull” Gogi, a play on the Korean barbecue dish bulgogi. The $16.50 dish is made with beef marinated in sweet soy and topped with kalbi glaze, chile mayonnaise, a fried egg and kimchi slaw.

For the slaw, Meidenbauer combines julienne kimchi, carrot, red onion and napa cabbage with chopped cilantro and green onion. He dresses that in lime juice and seasons it with salt and pepper. “The natural juice of the kimchi along with the lime juice makes the dressing for the slaw. It goes great with grilled meats,” he said.

Other kimchi dishes across the country: