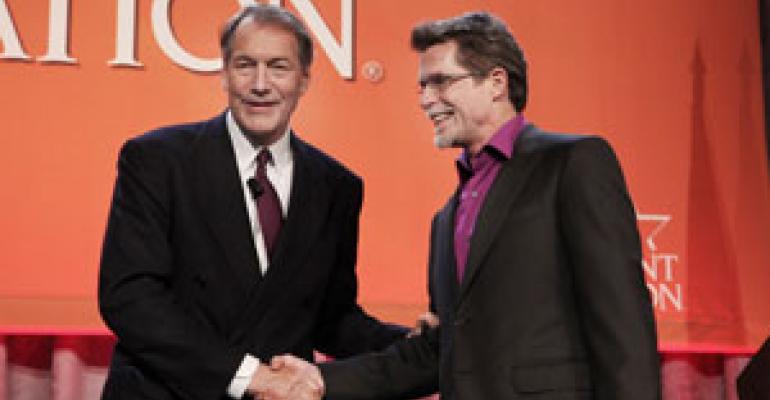 Restaurants have long provided the setting for great conversations and continue to hold an important place in American culture, said Charlie Rose, the well-known interviewer, during his keynote speech at the National Restaurant Association Restaurant, Hotel-Motel show on Sunday.

Rose, managing editor and host of The Charlie Rose Show on the Public Broadcasting System and a correspondent for 60 Minutes on CBS, told show attendees that curiosity is one thing he has in common with restaurateurs.

“Restaurants are a wonderful place for conversation,” Rose said, during his speech to a filled auditorium at Chicago’s McCormick Place. “It is in our culture, in our movies. In the movies, they are always talking about food.”

His passion for the restaurant business led him, he said, to continually interview chefs about what makes them and their food great. Since 1991 when he began broadcasting his PBS show, he has interviewed the likes of renowned chefs Daniel Boulud, Thomas Keller, Eric Ripert, Mario Batali and Marcus Samuelsson. He said those conversations have fueled his passion for great food.

“Those programs set me on a course to use [those restaurateurs] as ongoing subjects for the show,” he said.

Rose said he always finds himself questioning what makes great food or great chefs and where the best food can be found.

He also talked about President Obama’s passion for good food and restaurants. Rose told the attendees that the president, who is from Chicago, often goes to his favorite restaurants here.

As he talked about the president’s affinity for Chicago’s restaurants, Rose introduced a special guest to the audience: Rick Bayless, the Chicago-based celebrity chef who last week created the menu for a White House state dinner for the president of Mexico. In an impromptu interview with Bayless, Rose asked the chef how different it was to oversee a state dinner for the president, compared with cooking at his own restaurants. Bayless said he was not at all prepared for the intense orchestration involved with serving the meal.

“I used my flavors, but put the execution [of it] in the hands of [White House chef] Cristeta Comerford,” Bayless said. “She executed it; we served four courses in one hour. Dinner is only one part of [the event].

“But,” he added, “for us to be able to put Mexican food on the table during a state dinner for the Mexican president was astonishing.”

In addition to Rose’s appearance during the second day of the show, several sessions touched on subjects ranging from nutrition for children to money-making menu trends.

- During a session titled “New Kids’ Meals: Kid Tested, Nutritionist Approved,” moderator Beth Johnson said a government interagency panel composed of members from the U.S. Department of Agriculture, Centers for Disease Control and the Federal Trade Commission will release their recommendations this summer on how restaurants can market their products to kids. The interagency group has been meeting for two years.

Though the FTC does not have the authority to impose regulations, it can use its influence to affect some marketing programs and procedures, Johnson said.

“This is something the industry needs to watch closely,” she said. “It could have significant consequences.”

- At “Menus 2010: Turn Trends into Money Makers,” menu trends expert Nancy Kruse said that even though some economic and industry indicators are showing improvement, unemployment is still high, near 10 percent, so restaurateurs need a menu strategy to bring customers back. Efforts could include the use of innovative and “craveable” dishes, a brand’s evidence of culinary expertise, and menu items that cannot be recreated at home easily.

- Also at the show, John Longstreet, president and chief executive of motor-sports themed casual-dining chain Quaker Steak & Lube, said the chain’s boneless wings and flatbreads, both of which were introduced as limited-time offerings earlier this year, would become permanent menu items in June.

The boneless wings, the 38-unit chain’s first breaded product, are made of panko-crusted chicken breast coated in a choice of the chain’s 21 signature sauces.

The chain also is planning its first small-footprint unit for Madison, Wis., with a planned opening date of July 14, and a second one is slated for Lakewood, Ohio, later this year. The Mini-Lube is intended for strip malls and other places with smaller spaces and will have about 40 menu items instead of the 66 at full-sized restaurants.

Details of the menu are still being worked out, Longstreet said, but he expects the Mini-Lube to offer lighter, better-for-you fare.

- Sizzler also is revamping its menu, according to Kerry Kramp, the chain’s president and chief executive.

Kramp said the chain has completed a year-and-a-half long menu revamp that included researching its past menus with the goal of returning Sizzler to its roots. He said improvements included using better raw materials, such as fresh avocados for guacamole and higher-quality salmon.

Kramp also said he was working on a prototype for a food truck that would first roll out at charity events, but might eventually be used as a for-profit operation.

Mark Brandau and Bret Thorn contributed to this article.