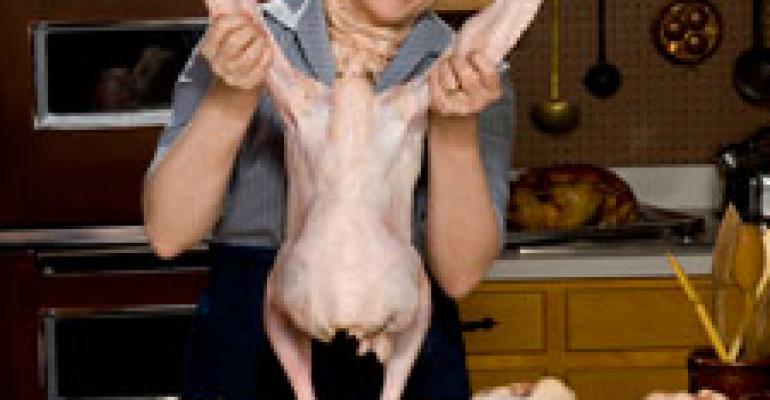 Anyone who has attended professional cooking classes will relate to "Julie & Julia." But the film, which opens in theaters across the country Aug. 7, also will appeal to food lovers and people who just love love stories.

The movie is about two smart, ambitious women who are ahead of their time and at turning points in their lives, and their supportive husbands.

It is based on Julie Powell's book, "Julie & Julia," and Julia Child's "My Life in France," which was co-authored by her nephew, chef Alex Prud'homme. Child, brilliantly portrayed by Meryl Streep, and Powell, played by Amy Adams, were culinary pioneers. Child introduced a generation of "servantless" American women to authentic French cooking with her groundbreaking book, "Mastering the Art of French Cooking." Powell, for her part, blazed a path into the 21st century food-blogging world at a time when many people were still learning to spell "Google."

Both modern women chose to serve their country as they struggled to fit into rapidly changing societies. Powell, a low-level U.S. government worker charged with aiding victims of the Sept. 11 World Trade Center bombing, found comfort by cooking during her downtime. But she secretly aspired to be an important writer. Screenplay writer/director Nora Ephron cleverly entwines Powell's history with Child's background as an office worker with the Office of Strategic Services, or OSS, the precursor to the modern CIA -- and not the one in Hyde Park.

Both Powell and Child married men who helped to support these two already strong women and celebrated their successes with them along the way. The film, which also highlights their differences, takes place as each woman's career as a food writer is blossoming. The more privileged Child is shown living large in Paris with her diplomat husband, Paul, played by actor Stanley Tucci; Powell,. by contrast, is renting a dump of an apartment in Queens as she starts writing her blog.

Another dissimilarity, which the film underscores, is that the Childs enjoyed a sex-filled life, while the young Powells struggled to fit lovemaking into their daily routines.

After reading both books and seeing the movie, I must admit "Julie & Julia" works much better in the film format. I found Powell's book slow-moving, and I had a hard time relating to her. But watching Streep portray Child on the big screen just deepened my respect and love of the culinary legend, and made me want to go back and read her book again.

Child made people feel special, whether she was doling out advice on TV about how to bone a duck or simply talking to you person-to-person. At a few work events when I had the chance to speak with her, she was interested and interesting. Her eyes and ears were focused on me rather than wandering the room in search for someone who was more important and beneficial to her career.

When I would call her at home to interview her for articles in Nation's Restaurant News, she sometimes answered the phone herself, her high-pitched voice immediately recognizable, and she always rattled off great quotes and insights — even when she was well into her 80s. Moreover, Child treated me with the same respect when I was in my 20s and starting out my career, like Powell, as when I had 20 years under my expanded belt and Child herself was celebrating her 90th birthday.

My colleague Paul Frumkin recalls a similar experience with Child when he sat at her feet, literally, and interviewed her. "She was so smart," he says.

Ask just about every food writer over the age of 25, and you'll hear a similar story. Child forged the way for us and gracefully supported us as we ventured into our careers. She also was a huge devotee of talented American chefs, especially those who cooked with butter.

Ionce walked through a restaurant kitchen with her and she not only thanked the chef, but she said hello to each cook she passed. She looked them in the eye, shook their hands and smiled. She took the time to sign books and talk to students who participated in a cooking contest she helped judge for NRN when she was in her 80s.

And like Child, "Julie & Julia" is a sweet but not cloying film, in my nonprofessional film reviewer's opinion, that will leave you smiling and feeling satisfied for hours after you have left the theater. But if you run a restaurant, especially one near a movie theater, expect a resurgence in French classics, like boeuf Bourguignon and sole meunière. Julia's influence can still be felt today.