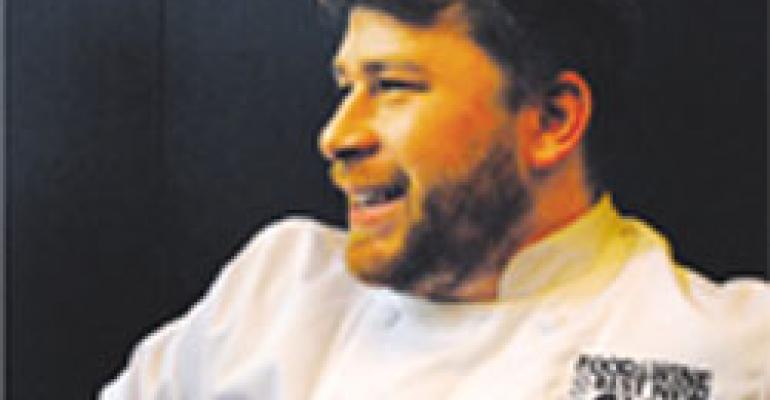 Jonathon Sawyer only just turned 30, not long after being named one of Food & Wine magazine’s best new chefs, but he has already had a long career in the kitchen. On his 13th birthday he took a job in the kitchen of The Mad Cactus in Strongsville, Ohio, and he continued working in kitchens throughout high school and college. He spent two years at the University of Dayton before a glimpse of what his career would be like as an industrial engineer convinced him that he’d been in the right field the whole time.

“After three days of that, I was just like, ‘I can’t see myself doing this for the rest of my life,’” Sawyer said. So industrial engineering and the University of Dayton were out, and the Pennsylvania Culinary Academy was in.

Since that epiphany, Sawyer has led a charmed life, working with such notable chefs as Michael Symon in Cleveland and New York, and Charlie Palmer in New York. Today his year-old restaurant, Greenhouse Tavern, is the first nationally certified green restaurant in Ohio, and the whole family is involved. Sawyer’s wife, Amelia, writes a blog at , and his five-year-old son even helps with foraging for mushrooms.

You were in New York for some time. Why did you move back?

I moved back to Cleveland when I found out we were having our first child, and that’s when I opened Lolita for Michael Symon. About a year and a half into Lolita we had an opportunity to open another restaurant in New York, and that was called Parea. So I moved back to New York for that.

Make sure that you eat before you start cooking, because your mind can play tricks on you.

Taste everything all the way through the cooking process.

Then we found out we were having another kid, so I left Parea. I opened up Bar Cento in the Ohio City section of Cleveland, while we were waiting to finish the build-out for Greenhouse Tavern. Being the first nationally certified green restaurant in the state of Ohio, it took a lot longer to build than we anticipated.

Why did it take longer than expected?

People in Ohio weren’t familiar with using fly ash concrete or using entirely LED fixtures for every light in the building, or using solar-powered hand-flushers and hand-washers in the restrooms, and a litany of other things.

Why was it worth it to you to make Greenhouse Tavern a certified green restaurant?

It was just a personal decision for my wife and me. It really was nothing more than that we wanted the opportunity to leave the world a little better place. Hopefully at some point someone in Cleveland will take a cue from our inspiration and say, “We can do this too, we can change our restaurant.”

How do you let people know about your environmental efforts?

Well, we don’t really like to force-feed people our beliefs, but if someone asks, we have that info available.

How would you describe the food at Greenhouse Tavern?

It’s a local cuisine with a backbone in French.

Do you have any signature dishes?

We have quite a few signatures. It’s our one-year anniversary, and we had a cooking class called the “Best of Greenhouse Tavern” with the dishes that we think are kind of iconic to us, ones that we’ve done since the beginning. Some of them are silly and simple, and some are really complex. Our French breakfast radish is just with butter, lemon and salt, and it’s a fan-favorite. And we do a version of devils on horseback that is local bacon wrapped around dates stuffed with charred Fresno chilies and bitter chocolate.

Another one that is really popular is our foie gras steamed clams. There’s a little bit of foie gras with a red onion and one of our late-harvest Viognier vinegars. We make all our own vinegars in house.

How do you make your own vinegars?

We have upwards of 15 vinegars going at a time. I have eight carboys and four new American oak barrels that I finish vinegar in to put a little more tannin or depth in, and then we bottle them after that.

Is it true that you take your five-year-old son foraging for the restaurant?

I do, I take my son. He’s actually got a great eye for it. He found the first morels that I ever saw in Ohio. He’s obviously not allowed to touch the mushrooms or eat them, but he’s able to point and say “Daddy, mushrooms.”

What kinds of ingredients are you able to find?

We most commonly pick dryad’s saddles and oysters. Sometimes we’ll plant shiitakes, and in the fall we have a good source of boletus. Once in a while we’ll get lucky and get porcinis. In the springtime we do tons of greens, we have garlic mustards, garlic chives, wild ramps, wild dandelion greens, wild ginger. For all the lack of “seasonality” in Ohio, it’s an exciting spring.

Are there particular ingredients you like to cook with?

Does Ohio’s climate make it more difficult for you to source local ingredients?

For us proteins are really easy, almost as easy as they were when I was living in New York. With the produce, since we’ve been back here and working with suppliers, the farmers have gotten better. The menu during the winter isn’t as local as we’d like it to be. It is local, but we’re never going to be able to grow lemons or olives in Ohio. Those are things we just have to understand. I’m still getting butter lettuce from a farmer who has a hothouse, and things like that, but I’m not going to get celery or carrots.—[email protected]