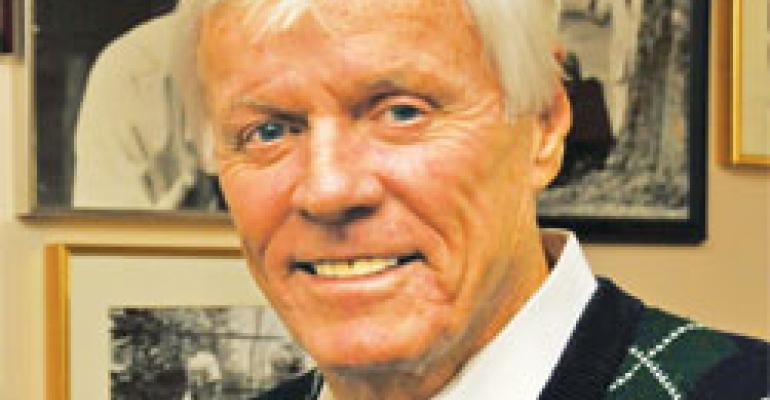 John Y. Brown, a former governor of Kentucky who helped create the modern restaurant franchising industry as co-owner of Kentucky Fried Chicken from 1964 through 1971, says the defining speech of his life came in a convention hall, but not of the political variety.

The year was 1967, just three years after Brown, then a 31-year-old attorney, and his older partner, successful businessman Jack Massey, purchased the Kentucky Fried Chicken franchise system and its recipes from founder Harland Sanders for $2 million. And Sanders was not happy.

A politically appointed Kentucky Colonel, known to many as “The Colonel,” Sanders between 1952 and 1964 had convinced the owners of 600 restaurants in multiple states to pay him a nickel for every chicken they prepared using his secret recipe seasoning blend with 11 herbs and spices and sold with the aid of his name. In 1966, Brown and Massey took their company public and ramped up system development with the help of franchisees and contract spokesman Sanders, whose entrepreneurial success story and white hair, white beard and trademark white suits and string ties made the then 76-year-old restaurateur a marketing icon.

A year later during the KFC convention in Miami, Sanders appeared wearing a black suit. Brown recalled it as one of “the scariest moments” of his tenure at the chicken company when The Colonel took the microphone and unleashed his wrath about rumors the franchisor was going to change his chicken recipe and his displeasure at having been left off an employee pension plan even though he was a contractor.

“He proceeded for 45 minutes to tell us we don’t know anything about the chicken business, and we’re out to get your money,” Brown said of the harsh words by Sanders, who had a reputation for being feisty in his later years.

Brown, who followed Sanders to the microphone as a room full of nearly 1,500 people sat wondering what would happen next, said of that moment, “Politics and all, that was probably the most important speech of my career.”

“I said the real story is that The Colonel is an artist, and like all artists he is a perfectionist and he has painted a dream for all of us,” Brown recalled. “You have to pinch yourself to realize you are a part of him [and his dream]. And Colonel, we’re continually striving to reach out to meet your expectations.”

Sanders, who had previously quit and returned to work for the chain he had launched, didn’t quit that night either. And Brown once again exhibited his ability to soothe ruffled feathers and gather people to his cause.
Immediately after buying the company, Brown, the lawyer, revised and standardized Sanders’ one-page franchise contract. Then Brown, the salesman, barnstormed the country, getting The Colonel’s flock of franchisees to sign the new agreement.

“Jack Massey was the back-of-the-house guy, but John, whenever he was with franchisees anywhere in the country, really resonated with them,” said James Collins, who was a Southern California KFC franchisee and Sanders’ West Coast area developer, when Brown came to power. “It was the best marriage [of skills] you can imagine,” added Collins, who later augmented his KFC holdings by acquiring the Sizzler family steakhouse chain in 1967 and taking the combined enterprise public in 1968 as Collins Foods International.

Collins recalled how, while preparing for his public offering, he and Brown did some horse-trading. Collins needed the individual franchise contracts for his 33 KFC stores consolidated under one agreement, and Brown wanted to acquire back from Collins the area developer powers and franchise revenue sharing agreement for Southern California he had negotiated with Sanders.

“We had a lot of give and take because we knew we were onto something hot,” Brown said of the early days. “[The franchisees] had a passion for it, and we just got along with them and we united them. We built brand image, with the red-and-white tupelo roof, and we stuck to our guns about the menu.”

Brown is proud of the fact that KFC is believed to have created the industry’s first franchisee advertising cooperative.

“We picked their brains,” Brown said of the group, “and I didn’t try to get too fancy with my personal opinion.”
“He did a hell of a job of delegating,” said Lou Karibo, a former schoolteacher who was the public information officer for the Kentucky State Police when Brown, an acquaintance from the University of Kentucky, hired him in the mid-1960s to be KFC’s first director of training. Karibo later served as part of Democrat Brown’s political cabinet of millionaire entrepreneurs as administrator of Kentucky state parks.

Kentucky Fried Chicken had grown to more than 3,500 restaurants worldwide by 1971 when beverage and packaged goods company Heublein Inc. acquired it, setting off a succession of ownership changes that ended in 1997 when then owner PepsiCo announced it was spinning off its restaurant operations, including KFC, to the entity now known as Yum! Brands Inc.

In addition to leading the explosive growth of KFC from 1964 to 1971, Brown has owned two professional basketball franchises and co-founded Kenny Rogers Roasters with recording artist Kenny Rogers, expanding that chain to more than 300 restaurants before selling it in the mid-1990s. In the past 20 years, he has founded such other brands as Miami Subs, Chicken By George and Roadhouse Grill.

He now is involved with a concept called ZaZa Fine Salad and Wood Oven Pizza Co. in Little Rock, Ark., and is preparing to present a series of entrepreneur seminars.

Today, the Louisville, Ky.-based KFC system operates more than 15,000 restaurants in more than 100 countries, including more than 5,200 in the United States.