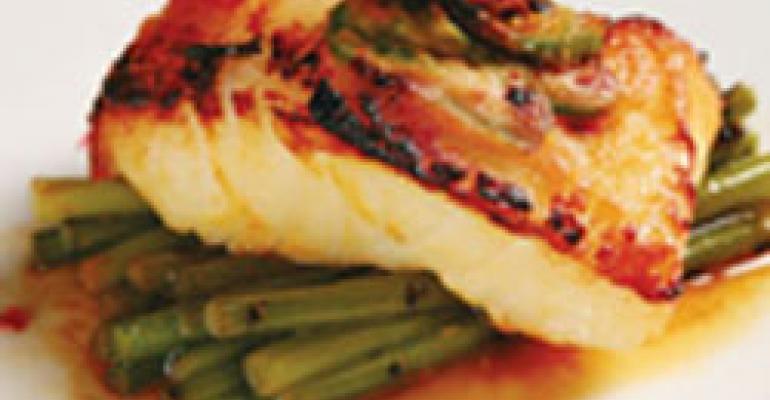 Jalapeño hops from Mexican to mainstream

The jalapeño has come a long way since crossing the border from Mexico into the U.S. Long a staple ingredient of traditional Mexican cuisine, the spicy, thick green chile—which turns red when ripened and becomes the popular chipotle when dried and smoked—now is proving popular at a wide range of restaurants, from fast food to fine dining.

Americans, especially those in the Generation Y and Millennial demographics, who grew up eating bold-flavored foods, are craving spicier dishes, according to trend tracker Kara Nielsen at the San Francisco-based Center for Culinary Development. Marc Halperin, the center’s culinary director and chief operating officer, calls the jalapeño the “grandfather of chile peppers.”

The widespread acceptance of the jalapeño has opened the door for spicier chiles, too, he says, including habanero, ancho and bird’s eye, also known as piri-piri. But the jalapeño still leads the pack.

Grown across the United States, and named Texas’ state pepper in 1995, the jalapeño has a flavor profile and familiarity that has long been popular in Mexican cuisine, whether baked in a rich enchilada or fashioned into a thick jelly. Now chefs have taken to incorporating the pepper into cuisines that have nothing to do with Mexico.

Many Japanese eateries, for example, are incorporating jalapeño into their sushi or sashimi. Masa Endo, executive sushi chef at the Asian fusion restaurant Tengu in Los Angeles, created a roll called the “Diablo,” made with albacore, burdock, cucumber, jalapeño and habanero ponzu.

Though jalapeños are not popular in Japan, they are in California, Endo says. That familiarity makes it a good addition to the menu to draw in those who may not be as comfortable with Japanese cuisine, he says.

Endo says he also likes the pepper because it has a different effect on the senses than the more commonly used Japanese heat element—wasabi.

Unlike wasabi, whose sensation goes from the mouth to the head and nasal passages, jalapeño works its way “down to the system,” he says. This is ideal for people who can’t handle the effects of wasabi on their sinuses and still want some spice in their Japanese food, Endo says.

“Jalapeños and fish go really well together because fish sometimes doesn’t have a lot of flavor on its own,” Hueston says. The sea bass is a moist fish that absorbs the flavor of the jalapeño better than drier varieties, Hueston adds.

Many chefs are also using jalapeños in sauces and dressings of all kinds. The Fog City Diner in San Francisco, for instance, uses a jalapeño-buttermilk dressing on a Oaxacan dish made with grilled chicken.

In Tucson, Ariz., at fine-dining restaurants Janos and J Bar at the Westin La Paloma Resort & Spa, chef-owner Janos Wilder says he’s been working with jalapeños for as long as he can remember. Wilder offers 10-hour beef short ribs braised in orange, pineapple and jalapeño mojo as well as a stuffed quail appetizer with cranberry-jalapeño syrup. The chef also uses a light jalapeño salsa in his combination plate featuring a variety of meats, including carne asada and jerk pork.

“As people are getting more comfortable with spice, the average consumer is starting to find out it can offset other flavors very well,” says Frazer.

The fast-food chain, which this February re-released its popular Jalapeño Thickburger, which first debuted last year, has considered adding to its menu dishes with contrasting sweet and spicy flavors and may consider using other popular peppers, such as habanero, ancho and chipotle, in the future.

Chipotle offers a rich, smoky flavor profile, says Frazer, but he says the chain is not likely to incorporate it anytime soon, because it’s not popular enough yet.

Frazer explains that his chain usually incorporates trends about halfway through their life cycle rather than risking being too avant-garde for its customers.

Fine-dining restaurants also are experimenting with the jalapeño, often contrasting it with sweeter flavors.

The Patagonia Bar & Grill in Richboro, Pa., for instance, has a signature sweet potato-jalapeño soup as one of its appetizers. The restaurant’s owner and chef, Daniel Lucci, says when he first suggested the concoction as a chef at another restaurant 15 years ago, people thought it was a wild idea and were hesitant to taste it at first. But they were won over after a few spoonfuls.

According to his wife and co-owner, Silvia Lucci, there has been an increasing demand for the soup in the last couple of years, especially around Thanksgiving. Last year, customers ordered 360 quarts of the soup to go for the holiday, and Lucci had to take orders as early as three months in advance. Daniel Lucci says that jalapeños rank first among the peppers he uses because they come in many different levels of heat.

“I think jalapeños are always trendy,” Ishii adds. “I don’t think the trend of spicy food will ever go away, whether you use a habanero or jalapeño or cayenne.”