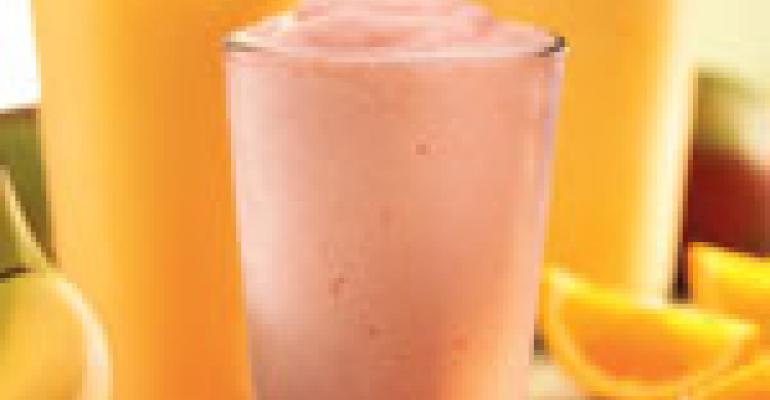 Jack in the Box adds smoothies

SAN DIEGO Jack in the Box debuted Real Fruit Smoothies on Monday at restaurants in several markets, primarily on the West Coast.

The San Diego-based quick-service chain is scheduled to complete the national rollout of the new beverages by the end of July. As previously announced, the smoothies are made from a blend of Minute Maid fruit juice and nonfat frozen yogurt in three flavors: Strawberry Banana, Mango and Orange Sunrise.

Recommended prices are $2.99 for a 16-ounce and $3.99 for a 24-ounce serving. Participating restaurants in the first phase of the rollout include those in Idaho, Nevada, Arizona, Utah, Hawaii and several markets in California, such as Bakersfield, Chico, El Centro, Eureka, Fresno, Monterey, Palm Springs, Redding, Sacramento, Salinas, San Diego and Santa Barbara.

Jack in the Box Inc. operates or franchises more than 2,100 namesake restaurants, as well as more than 400 Qdoba Mexican Grill units.