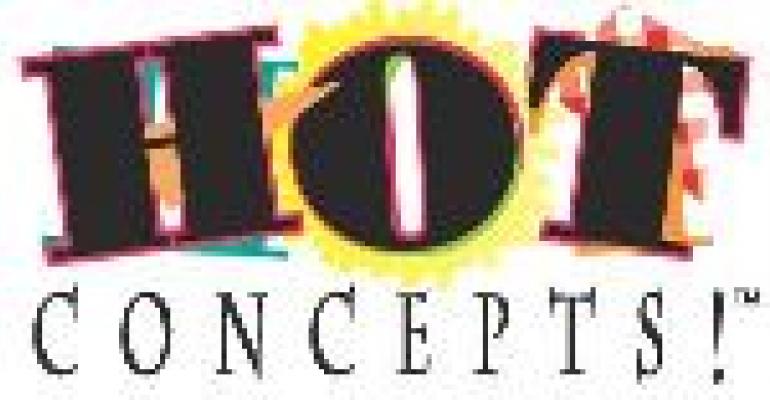 When brainstorming concepts, restaurateurs say they tap the same well of inspiration to conceive their projects that writers, painters, composers, choreographers and preachers do: life, the universe and everything in between.

In the competitive restaurant industry, whose relentless growth-at-all-costs mantra often is intensified by rampant me-tooism, inspiration abounds nonetheless and can come from anywhere. Thriving hot concepts have been born from inspired a-ha moments; developed from careful calculation and observation of an unmet consumer need; inspired by an entrepreneur’s hobby or indulgence in nostalgia, history or sports; spun off from some fad in popular culture; and, of course, borrowed from ethnic cultures and retranslated for the mainstream.

“Creativity is the art of seeing things others don’t see,” said Dennis Lombardi, principal with WD Partners, a Columbus, Ohio-based consulting firm. “But a hot concept has to achieve two important goals: It has to prove it is durable for the consumer and has good unit economics for the owner.”

The restaurant industry is populated with people whose creative engines know no bounds. Among them are such well-known luminaries as Blaine Sweatt, who recently retired from Darden Restaurants Inc. as executive vice president and president of new business development. Under his watch, Orlando, Fla.-based Darden gave birth to such past Hot Concepts! winners as Bahama Breeze, Smokey Bones and Seasons 52. Phil Romano, once the creative guru for Brinker International, also conceived several concepts, including Eatzi’s!, a marketplace brand that was studied widely when it won its Hot Concepts! award in 1996, and Cozymel’s, a member of the Hot Concepts! class of 1995.

Richard Melman also is held up as an industry icon for the diverse and innovative concepts he has conceived for Lettuce Entertain You in Chicago, including Maggiano’s Little Italy, which was honored in 1995.

Other innovators may not be as well-known, but their concept creations speak to the inventive and inspired juices that run thick through operators’ veins.

For instance, Jeff Sinelli, the founder and president of the 57-unit Which Wich, a Dallas-based 2007 Hot Concepts! class member, makes no pretense that he would like to be referred to with the same kinds of laurels bestowed on Sweat, Romano and Melman.

“You know what I want my epitaph to read on my tombstone?” Sinelli says. “Here lies a restaurant developer.”

Sinelli is on track to get his wish. While Which Wich is one of the industry’s most novel recent creations, he also fathered an earlier Hot Concepts! winner from the class of 2002, Genghis Grill.

In the case of Genghis Grill, Sinelli tapped into his fascination with 12th-century Mongolian culture, specifically Genghis Khan’s soldiers’ custom of heating their battle shields over open flames to cook food on them at the end of a day of fighting.

Culled from that image, the restaurants feature large six-foot-wide circular grills that offer an entertaining and interactive Asian stir-fry experience. Guests dine from bowls filled with ingredients that they have chosen and watch as “Grill Masters” stir up guest requests with long, wooden sticks.

For some hot concepts, luck, opportunity and the unpredictable precipitated the spark that led to a winning restaurant.

When the Cheesecake Factory—inducted in the first year of the Hot Concepts! awards in 1995—was presented with the opportunity to open a unit in the Venetian Resort Hotel and Casino, executives of the chain knew the site was too close to an existing outlet.

Thus, necessity and the fear of losing the space to a competitor spawned sister concept Grand Lux Cafe, a more upscale and slightly larger version of Cheesecake. Like its sibling, the Grand Lux won Hot Concepts! recognition in 2003.

Detecting that consumers wanted something more from the Tex-Mex segment, the founders of Moe’s Southwest Grill, a 2004 Hot Concepts! inductee, hit on a theme of freshness, food and music.

It was the recognition of humanity’s love of pasta worldwide that gave former packaged-foods brand manager Aaron Kennedy the bright idea that a restaurant that served a broad variety of pasta dishes quickly could be a unique and successful alternative in the fast-casual segment.

Launched in 1995, Noodles & Company, a 150-unit Broomfield, Colo.-based chain that dubs itself “the world’s first quick-casual global noodle restaurant,” serves every conceivable style of pasta in tens of thousands of bowls a day from Asian soba noodles to Neopolitan spaghetti arrabbiata to Mom’s macaroni and cheese. Noodles & Company won its Hot Concepts! honor in 2001.

While many of the creators of Hot Concepts! restaurants have moved on to other brands or industries or retired, executives who now run the businesses insist that staying true to the uniqueness of the original creation is a tough but fun challenge in an industry where operations, service practices and unit designs have to be updated periodically to deal with changing consumer taste and competition.

“We may not have been around when [Jeff] Sinelli was conceptualizing the stores and only had a few units,” says Al Bhakta, current president of Genghis Grill, “but we are definitely committed to maintaining the concept’s spirit and uniqueness and to refine it so we can take it to the next level and be just as creative.

“A huge amount goes into that process every day to keep it fresh and dynamic.”