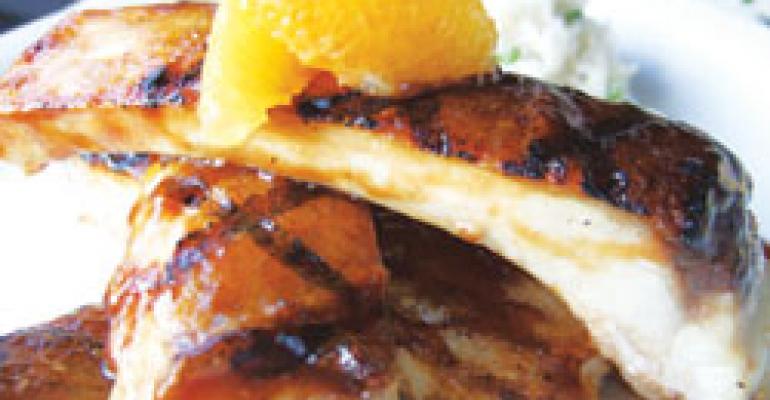 Hearty, flavorful ribs, like many comfort foods, tend to play particularly well in tough economic times, but for a more memorable twist on the familiar classic, chefs are experimenting with fish ribs.

The ribs, which come from larger species of fish and are typically comparable in size to pork ribs, can sometimes be difficult to obtain, but when available they leave a lasting impression, chefs say.

It’s been nine years since Sergio Abramof, chef-owner of Saravá in Cleveland, regularly served tambaqui fish ribs, but he says people still come in asking, “When are you getting the fish ribs again?”

Abramof is having difficulty finding a regular supply of tambaqui, a mild tasting fish that was once endangered and is now farmed, he says. Although, when he can get them he offers them as a special.

“It was a memorable dish,” he says. “It is quite an amazing eating experience. Guests are intrigued by eating a fish rib.”

Abramof says even when serving tambaqui bones, which are about 5 inches long and over an inch wide, he lists a warning on his menu cautioning diners about the bones. He also points out that the dish is best eaten with one’s hands.

“It is dangerous to do with a smaller fish,” he says, since customers can choke on the bones.

Besides tambaqui, which is from Brazil, where the ribs are traditionally eaten, other large fish have ribs that restaurants can serve.

The more common tuna offers sizeable ribs that are also “hard to get, mainly because they get thrown away,” says Tim Love, chef at Lonesome Dove in Fort Worth, Texas, who tries to rescue the fish carcasses before they wind up in the trash.

“It is one of my versions of being green,” Love says. “I like to use things that people throw away.”

In fact, Love won “Iron Chef” on Food Network with a menu that highlighted tuna ribs. The episode is featured on his website,

For his tuna ribs, he coats frozen bones with an Asian barbecue sauce and grills them on a 600-degree grill, which keeps the flesh raw in the center. Each bone looks like a pork rib after Love saws it to size.

“It is like sashimi meat,” he says. “There is this incredible meat left” between the bones after fishmongers scrape the flesh from the outside of the bones, he says.

“The sauce caramelizes, but you have a beautiful tuna inside,” he adds.

He says he can only get the tuna bones when he goes to the New York City commercial fish market. He requests the bones to be flash frozen and then sent to Texas.

One rack from a fish that weighs about 60 pounds before butchering has about 5 pounds of rib bones and yields around 8 ounces of meat, or two portions, he says. But finding the ribs is worth the effort, he says.

“When I eat tuna, the closer I get to the rib the better quality it is,” says Love. “Like rib-eye [steaks served on the bone], it tastes better. You have all that flavor from the bone. It is just pure solid tuna.”

Steven Raichlen, who hosts a cooking show on barbecue for PBS and wrote a book on ribs, adds: “Meat right next to the bone is always the most flavorful. Eating ribs puts you in touch with your inner caveman.”

Back at Lonesome Dove, Love sells an appetizer portion of tuna ribs for $22. It comes with pickled Asian vegetables, such as bok choy.

The restaurant focuses on wild game dishes and other bone-based dishes, such as a buffalo femur bone split in half lengthwise to expose the marrow that’s browned and then listed on the menu as “prairie butter.” He also offers a rack of rabbit with the loin.

Tuna ribs are the house specialty at Kaikaya in Tokyo. On Kaikaya’s website, the chef-owner, who says he is a hobby surfer, describes his eatery as a “East-meets-West fish restaurant,” where he offers “seafood fusion.” The tuna spareribs sell for 1,000 yen, or around $10.50.

He purchases the fish frozen from South America. It is a relative of the piranha, but unlike its meat-eating cousin, pacu has primarily a vegetarian diet.

Barros marinates the fish ribs in chipotle and orange flavored barbecue sauce for about five hours then grills them over high heat for about two and a half minutes on each side. They taste like a mild fish and come out looking like light-fleshed pork ribs that are approximately the size of baby-back ribs.

They come three to a portion for a first course and weigh about 9 ounces with the bone. The dish sells for $11 and comes with coconut rice.

A server at the restaurant said the appetizer, marketed as the restaurant’s “trademark amazing fish ribs,” is quite popular with diners, noting that almost everyone he waits on tries the barbecue pacu ribs because the dish is unusual sounding.

Recently Barros teamed the fish ribs with baby-back pork ribs for a variation on surf and turf. He applied apple barbecue sauce to the pork. It was first grilled and then braised for about two hours in a 350-degree oven.

He sold the daily special of a half rack of pork ribs and four fish ribs for $35. It included garlic fries and carrot slaw tossed with basil and blue cheese dressing.