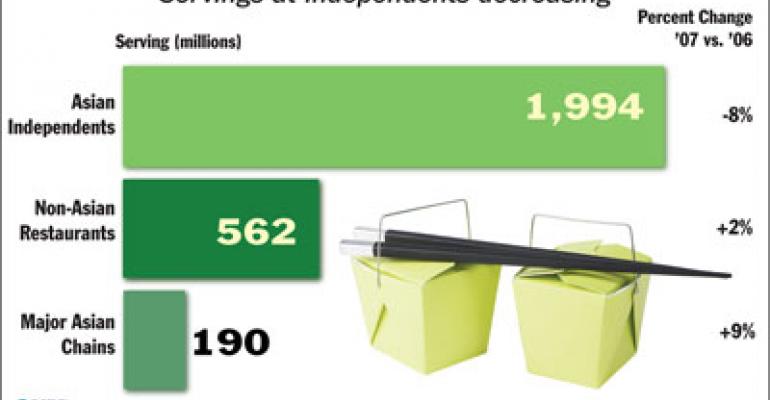 Like grains of simmering rice, the popularity of Asian food in the United States has expanded dramatically in recent years. Ironically, however, independent Asian restaurants have not been the beneficiaries, officials of The NPD Group say. Instead, non-Asian concepts that offer Asian dishes and an explosion of Asian-theme chains are capitalizing on the growing desire for Asian flavors.

The data also reveal that major chains, casual-dining independents and non-Asian concepts have gained market share in the selling of Asian food, while quick-service and midscale restaurants have lost share.

The increase in servings of Asian food at non-Asian concepts is due to greater availability and increased consumer interest in Asian food and flavors, Schmal said.

Asian dishes are showing up on all manner of menus. According to market research firm Datassential, among the top 10 fastest-growing food terms on menus — Cuban, Asian, Shanghai, Tuscan, Mandarin, Mediterranean, Hong Kong, Thai, Japanese and Italian — six are Asian.

In addition, Asian food ranks as the eighth-most-popular appetizer and entrée, behind hamburgers and cheeseburgers, chicken and turkey, pizza, Mexican food, chicken sandwiches, seafood, and breakfast sandwiches, NPD found. It falls ahead of numerous other appetizers and entrée offerings, including eggs, main-dish salads, pasta and beef entrées.

The most common Asian flavors at non-Asian restaurants are teriyaki, sesame, ginger, soy and wasabi, according to Datassential. Such flavors are most often found in entrées featuring fish or chicken as well as entrée salads and hot sandwiches.

Scottsdale, Ariz.-based Pei Wei Asian Diner is just one of the many major Asian chains that have benefited from consumers’ increasing interest in Asian fare. The fast-casual chain nearly doubled its number of locations to 144 over the past two years, and said it plans to open 25 new units in 2008. In 2007 annual revenues increased 35 percent over the prior year, generated in part by unit expansion during the last two years as well as increased traffic at units open since 2006, according to the chain’s 2007 annual report.

Among the many non-Asian concepts benefiting from a growing love for Asian food is The Cheesecake Factory. The Calabasas, Calif.-based casual-dining chain has been capitalizing on consumers’ interest in Asian foods since its first restaurant opened 30 years ago. Back then there were only a handful of Asian offerings. Today, 13 percent of the items on the chain’s vast menu are Asian or have Asian ingredients.

“If you are known for keeping fresh with ideas and menu items and service, people are going to come to you,” said Howard Gordon, senior vice president of development and marketing for The Cheesecake Factory.

Some of The Cheesecake Factory’s Asian or Asian-inspired menu items are among the chain’s overall best sellers. For example, appetizers such as Avocado Eggrolls and Thai Lettuce Wraps, salads such as the Chinese Chicken Salad and entrées such as Teriyaki Chicken and Miso Salmon are widely ordered. Asian items generated $125 million in sales in 2007 for the 139-unit chain, Gordon said.

“I think a lot of times people don’t go back to restaurants during these difficult economic times because it’s boring,” Gordon said of why Asian restaurants are on the decline. “The restaurants that are doing well, we offer an experience.”

In addition, Jocson said, by offering a variety of foods and flavors, including Asian, Yardhouse is able to satisfy families and other groups when each person may be craving something different.

“While we can’t provide exact sales numbers, more than 20 percent of our guests order an Asian dish, and we’ve had more than a 10-percent increase in the number of Asian dishes sold per restaurant per day in the past year,” said the company’s executive chef Ross Kamens.

The use of fresh ingredients, table service and silverware, and a comfortable environment are among the qualities that differentiate Noodles & Company from other fast-casual Asian competitors, Kamens said.

“Adding something fresh and new, like a new Asian entrée to your menu, might entice people in,” Schmal said. “It’s an opportunity [for operators] to improve [their] menus.”