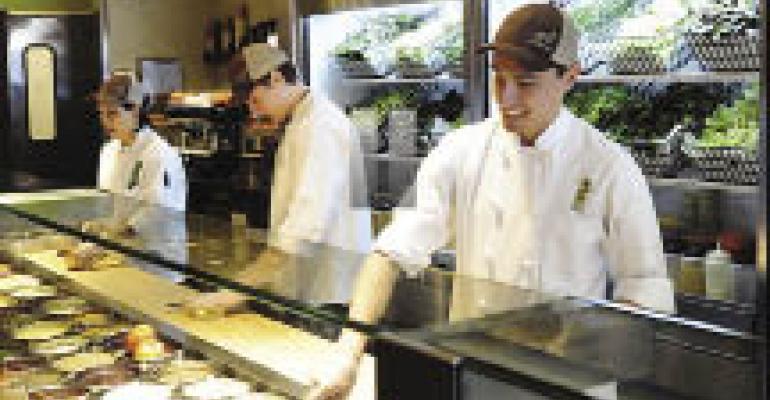 Last week, NRN introduced the 2011 Hot Concepts! award winners. The Hot Concepts! awards are given each year by Nation’s Restaurant News to young, growing chains that embody the perseverance and entrepreneurial spirit of the restaurant industry. This week, find out more about each of the five concepts who were able to identify and capitalize upon opportunities in their markets across varying cuisine, service style and formality. Today's winner spotlight is on Mixt Greens.

When Richard Cervera, a veteran of the Taco Cabana and House of Blues chains, considered a return to the restaurant business after a detour heading a clothing concern founded with U2 front man Bono, he was searching for an original foodservice concept.

What he found was a three-unit quick-service chain in San Francisco called Mixt Greens, a lunch spot that bills itself as an “eco-gourmet” specialist in custom meal-size salads, though sandwiches can also be had.

“They were small and in downtown San Francisco, and I saw an opportunity to pay [the founders] handsomely for what they had done rather than copy it,” Cervera said. Cervera is chief executive of OM Holdings, which bought Mixt Greens in 2009 from the trio who founded it, including chef Andrew Swallow, a veteran of such fine-dining establishments as Gramercy Tavern and Gary Danko.

Founded in 2005 and now with nine units spread out bi-coastally, Mixt Greens is no salad bar. Customers stand in line to place orders, and then watch as a fleet of white-coated salad chefs whips together ingredients like sushi-grade coriander-crusted ahi tuna, prime flat-iron steak, chicken that was slaughtered the previous night, soba noodles and white-truffle potatoes. Diners take their salads, sandwiches and house-made beverages to tables, where they might find a vertical garden wall where lettuce is growing.

All produce is seasonal and as local and organic as can be had, and salads are sold in biodegradable packaging designed to minimize environmental impact.

Its green bona fides garnered Mixt Greens recognition as one of the two greenest restaurants in the Bay Area by Thimmakka, a Berkeley, Calif.-based not-for-profit organization that helps businesses improve their eco-friendliness.

“They do have a corporate philosophy that runs throughout the chain,” said Ritu Primlani, Thimmakka’s executive director, speaking of Mixt Greens’ green practices, which also include support of nonprofit organizations.

San Francisco-based Mixed Greens Ltd. also owns Ogo Organic Café and Organic To Go catering, which likewise adhere to green business practices. Cervera says each Mixt Greens does more than $1 million a year in sales. Expansion has so far been self-funded, though this may change as growth proceeds in the United States and perhaps abroad.

Cervera’s appreciation for sustainability in connection with profitability was enhanced in the five or so years that he headed the business side of the clothing company Edun. Cervera, Bono and Bono’s wife, Ali Hewson, started the company in 2005 with the idea of bringing quality jobs to Africa. It sought organic materials and to keep sustainable business practices. Edun did so well that the luxury brand LVMH, which also owns Louis Vuitton, bought a 49-percent interest in it in 2009.

Cervera said he became friends with Bono through business dealings. Prior to Edun, Cervera worked with House of Blues, which he joined in 1995.

At Mixt Greens, “we try to blend something that may not have been done before and try to make it commercially viable. In that sense, [Mixt Greens] certainly has a correlation with what we did at Edun,” Cervera said.

Cervera said his experience with Taco Cabana also attracted him to Mixt Greens. He and his team had expanded the concept from three units to 148. Along the way, a copycat chain emerged, and Taco Cabana sued for image and trade-secret theft in a case that ended up in the U.S. Supreme Court. Taco Cabana prevailed, but Cervera said the lesson stayed with him.

“I was looking for something that had the original actual trade dress — hadn’t copied somebody else,” he said. “That was important to me because of the suit.”

And others are taking notice of Mixt Greens’ uniqueness.

“I haven’t seen anything else like it. I really like their dedication to using fresh local stuff,” noted Patricia Unterman, a restaurateur and restaurant reviewer for the San Francisco Examiner.