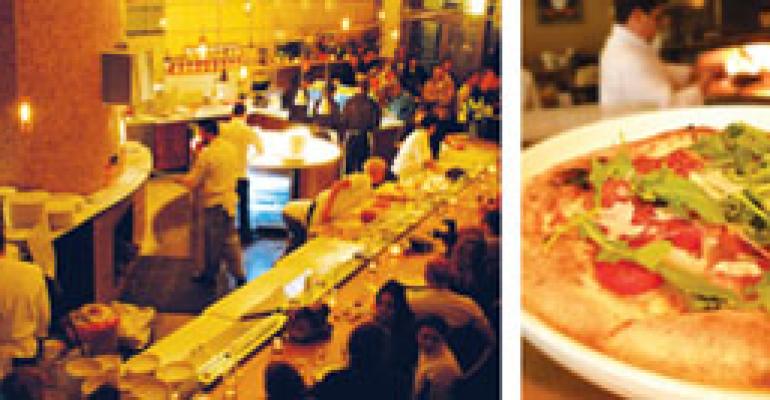 Joe Fugere, owner of four-unit Tutta Bella Neapolitan Pizzeria, is one of only a few people in the United States able to recreate an authentic Neapolitan pizza. Trouble is, he doesn’t want to.

Since the beginning for Seattle-based Tutta Bella, which he opened in 2004, Fugere has strived to create—not recreate—the true Neapolitan pizza, using only ingredients from Naples, Italy, and following the strict guidelines of Verace Pizza Napolitana, or VPN, one of Italy’s sanctioning bodies for authentic pizza.

“Let’s say our mission is to be the most respected Neapolitan pizza in the world,” says Fugere, a VPN-certified pizzaiolo. “We can’t be the most authentic. We’d have to be in Naples for that.”

Despite the initial difficulty in importing Neapolitan ingredients such as low-gluten flour, whole-milk mozzarella and San Marzano tomatoes—which are raised in the area around Mount Vesuvius—Fugere has grown Tutta Bella from a 35-seat restaurant in Seattle’s Columbia City neighborhood to four units that average $2.5 million in sales per year.

When Fugere wanted to go into business for himself after years of working in the Pacific Northwest for Starbucks, Papa John’s and Westin Hotels, he researched America’s two most popular foods: burgers and pizza. An online search led him to VPN’s website, and Fugere became so intrigued by Neapolitan pizza that he went to Naples to learn firsthand how to make it in wood-fired ovens.

“I took voracious notes of all these ingredients and wrote down brand names,” Fugere says of his time working for free in Neapolitan kitchens. “I tasted it and thought, ‘Oh my god, this is life-transforming pizza.’ I had no doubt that there was nothing like this in Seattle, and I knew people would appreciate it.”

Of course, a major reason for the lack of authentic Neapolitan pizza in Seattle, or anywhere in the United States, was the difficulty involved in actually sourcing ingredients from Naples, Fugere says.

“It didn’t make sense to ship a bag of flour across the Atlantic, then from New York to Seattle,” he says. “I had to beg some of my importers to bring it in. I think people appreciated the fact that I had that level of tenacity. Now we buy enough to fill containers.”

If not for the ingredient-sourcing challenge and the time and skill involved to get certified, authentic Neapolitan pizza would have potential for wide popularity, says Tony Gemignani, a consultant, restaurateur, and owner and instructor of the International School of Pizza in San Francisco.

The Neapolitan pizza is different than standard American pan pizza, with a soft and almost soupy center that requires diners to eat it with a knife and fork or fold it al libretto style, but eaters typically embrace it once they’ve sampled it.

“Once people try Neapolitan pizza and understand it, it should take off,” says Gemignani, who owns Pyzano’s Pizzeria and Tony’s Pizza Napoletano in San Francisco. “It’s not really meant for delivery. It’s a dine-in type of pizza. It’s a very wet pizza, so it doesn’t really travel well.”

Gemignani certifies other pizzaiolos at his International School of Pizza, and Neapolitan is one of the most popular styles his students want to learn, he says. Still, he adds, the number of pizzaiolos certified to make Neapolitan pizza, either by VPN or any of the other sanctioning bodies in Italy or the United States, stands at only a few dozen.

Fugere also acknowledges that authentic Neapolitan pizza has taken hold only in big cities so far, mostly on the coasts and in a few Midwestern cities, such as at Punch Neapolitan Pizza in the Twin Cities and Spacca Napoli in Chicago. But he thinks Tutta Bella’s growth shows the concept’s appeal in several kinds of settings.

“There’s a tremendous opportunity to provide this type of experience anywhere in the United States,” he says. “We’ve been successful in the suburbs, a transitional neighborhood, a downtown and very urban setting, and an in-city residential location. It’s not just our product; it’s also our service model. Our food is shareable, and it attracts families and foodies.”

“This is very much in the spirit of the Mediterranean diet,” he says. “We use simply cured meats, and even the Parmesan doesn’t have a caking agent. The oil we use is extra-virgin olive oil. For hundreds of years, the Mediterraneans have been eating this way.

“A lot of times pizza is blamed for obesity, but it’s not pizza per se, it’s those ingredients with lots of preservatives and high-fructose corn syrup,” he says. “Pizza can be an artisan food and be good for you.”

“We compose our pizzas, we don’t load them up,” he says. “We can use a few ounces of something that is packed full of flavor and create a more satisfying experience than using cheap ingredients. A couple ounces of paper-thin prosciutto di Parma, allowed to melt into the pizza, has more flavor than a pound of pepperoni. That’s why we can use expensive ingredients.”

Fugere says Tutta Bella’s growth most likely will continue at its current pace of one new location every 18 months or so, so long as the restaurants remain able to provide benefits to its employees like health insurance, flexible schedules and educational trips to Italy.

“I feel like we’re going to grow one location at a time as long as we’re having fun doing it and continuing to maintain our culture and our mission,” he says. “It has to be done in a healthy way financially, so that we don’t dilute the culture of the brand and can still do what we do for our guests and employees.