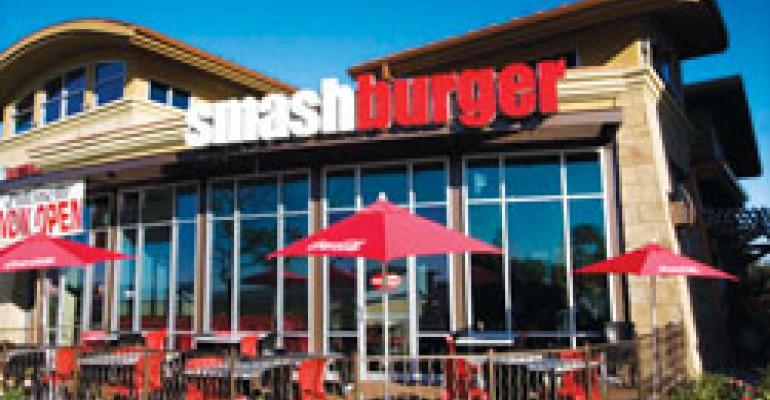 Tom Ryan, the founder of 2-year-old Smashburger, says he realized in the late 1990s that consumers wanted an upgrade from the typical quick-service burger—but without the full-service wait times or the $9 casual-dining price tag.

He was not alone, and in recent years Smashburger and other fast-casual burger restaurants have been popping up nationwide in the race to capitalize on the premium-burger craze.

All of the fast-casual burger restaurants have their own points of distinction. At Smashburger that includes beer and wine, Häagen-Dazs milk shakes, veggie fries, and the signature “smashfries” made with rosemary and garlic.

Smashburger chairman David Prokupek calculates that hamburgers, America’s favorite food, are a $100 billion category annually, and he projects that the so-called “better burger” segment in which Smashburger resides—a step up from the dominant brands of McDonald’s, Burger King, Wendy’s, and Hardee’s and Carl’s Jr.—could end up capturing up to 30 percent of that market.

Smashburger is doing its best to win its share. The Denver-based company had 21 units at the time of this writing, and officials say they are currently opening one unit every other week.

President Scott Crane says the name of the chain was originally a term they used internally to describe the burger, which is made from never-frozen Certified Black Angus beef kept in a loose ball until it’s ready to be cooked. Then, using a piece of parchment paper, the cook grabs the ball and smashes it down onto the hot griddle, holding it down for 10 seconds, and then cooking it for two-and-a-half to three minutes, depending on the size, for a burger cooked medium-well.

“Mashing them down on a super-hot grill almost immediately caramelizes them on the edges, so it makes, like, meat candy,” he says. “I think it’s a great place.”

As another point of distinction, Smashburger offers a signature item in each market that can only be found in that area.

In Minneapolis/St. Paul, it’s the Twin Cities burger, which has shredded cheddar “bar cheese” as well as grilled onions, melted Swiss cheese, lettuce, tomato and mayonnaise. Smashburger also offers, in addition to its own smashdogs, a Tailgater Bratwurst. In Texas, it’s a mustard burger. Boise has a signature potato bun. In other markets, local microbrew beer is sold.

“I think those small pieces of customization engage the press, and I think it helps drive people to want to try it,” Ryan says. “Also, it makes them think that we’re in this for them.”

The process of developing those items also ensures that they get to understand the tastes of each market, Ryan says.

As a result, the local specialty item tends to be the No. 2 seller in each city, after the regular Smashburger itself. The third most popular item is the customizable create-your-own option, which Crane says is an important indicator of how customers like to control their own destiny when eating out.

Smashburger started with one restaurant in June of 2007 and had opened 10 by the end of 2008. But as the economy soured, openings actually picked up speed for Smashburger.

Crane explains that the economy has allowed for great real estate and people, and added that product costs have come down.

The company has sold 258 franchises to “roughly 11” groups of “well-capitalized, seasoned multiunit operators,” Crane says, and by the end of the year he hopes to have 300 franchises sold to 15 groups. Many recent franchise agreements have involved professional athletes.

Officials expect about half of the units to be company-owned and half to be franchised.

“We are opening in markets where we have good local knowledge and strong operators,” Crane says.

For other markets, officials are enlisting the help of other experienced restaurateurs.

Now buzz on the Internet and elsewhere is preceding Smashburger as it arrives in new markets, and each new unit is opening with higher sales figures than the last one, Prokupek says.

Same-store sales are growing, too, he says, between 8 percent and 9 percent annually.

That buzz is no accident.

Stephanie Ichinose, spokeswoman for San Francisco-based , a Web community of user-driven critiques and other information about local businesses, says that when Smashburger came to Houston, the company approached Yelp’s local “community manager.”

“Just to meet and greet,” Ichinose says, but the result was a “Yelp Elite” event at Smashburger, at which active participants in the website can get a first look at the place, helping to engage them in the opening process.

Other restaurant groups—even finedining organizations such as those run by New York chefs Charlie Palmer and Daniel Boulud—have taken to inviting bloggers in early, even in preopening “hard-hat” tours, partly in an attempt to offset some of the ill-humored rants that can appear on the Internet when bloggers imagine they’re attacking a faceless organization.

“They seem to be a particularly savvy group,” Ichinose says of the Smashburger executive team.— [email protected]